It’s one of the most exclusive events in the social diary, Glastonbury for posh people, but without the mud, overflowing portaloos and ‘oh-Jeremy-Corbyn’. The whole royal family will be there, and as you’ll be rubbing shoulders with them you probably want to look your best. But what should blokes actually be wearing? Here’s a comprehensive guide to how guys should dress for Royal Ascot.

Firstly, it depends whether you’re in the Royal Enclosure or not. If you’re not, then things become a lot simpler. Dress like you’re going to the christening of your hoity-toitiest friend. So pop on a suit or a blazer or even, if it’s rainy, a swathe of tweed (it’s sort of countrysidey, after all). Alternatively, go for linen, it creases like paper bag and you’re guaranteed to slosh your drink all over it, but it’s light-weight and looks rather natty. Then, if it’s nice weather top it all off with a panama style hat.

Okay, So You’re In The Royal Enclosure…

When it comes to the Royal Enclosure, though, rules start to apply. If you’re a member, then let’s assume you can skip this article, but if you’re a guest of a member then don’t stress and read on. Here’s how not to get thrown out…

This is actually very simple, it’s school uniform all over again and you’ve got this one. You need a morning coat, morning trousers, waistcoat, shirt tie, smart shoes and a top hat. Accessorise with a brolly and pocket hanky.

This is the only time in life when you should use this adage, but the golden rule is WWJD! What Would Jacob (Rees Mogg) Do? While the fusty Tory’s Victorian politics may not be to your taste, his Edwardian dress sense is quite a useful guide. 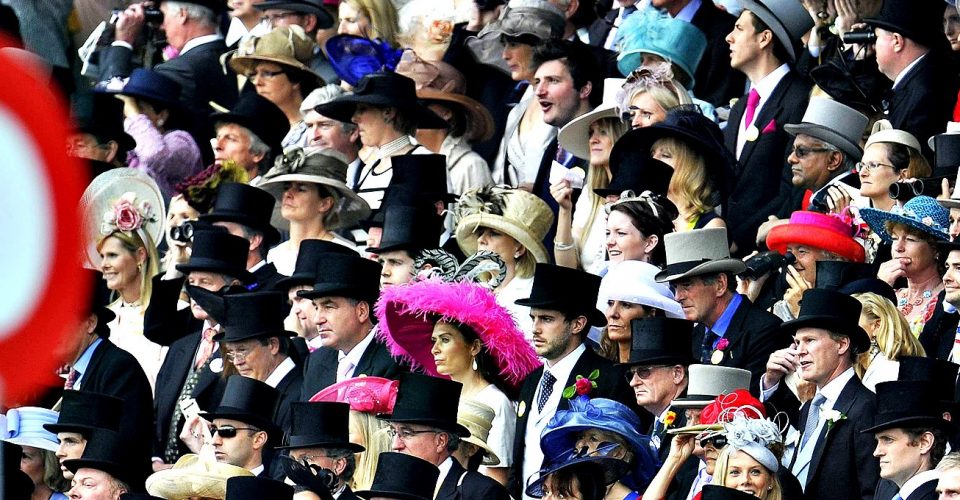 Breaking things down: a morning coat should be a decent wool, Moss Bros certainly won’t cut it, I’m afraid. Head to Oliver Brown on Lower Sloane Street, they’re spenny but in my opinion they’re the best. The cut should be smart, nothing whacky, you’re not best man at a Billericay wedding, not one of those Nehru style Bond Villain jackets, or indeed anything comedy. Ideally ensure it doesn’t have a notch lapel (it should have a ‘peak lapel’ – which is sort of upside down) and it fits nicely. The tails should come to the back of your knees (are those knee-pits?).

Ideally you’ll have pockets down the back of each tail, these are invaluable because you’ll find you can slip a bottle of Champagne down each tail and smuggle it in past security (note that this will strain the seams, but will save you a fortune once inside).

Trousers: you’re going for full-on Simon Cowell. A decent pair of morning trousers ride high, often with a ‘fish-tail’ design and always kept up with braces. Belts are not okay. A houndstooth material looks jolly smart but stripes are perfectly acceptable. Ede & Ravenscroft are reasonably priced, but a workaround if you’re feeling the financial pinch is to go to one of the outfitters in Eton. The school uniform there includes morning trousers and they can be a lot cheaper than in London.

If you’re Scottish, Irish or wannabe then can also wear a regimental or family tartan. You’ll look like you got dressed in a hurry and left your pyjamas on, but that’s your lookout. 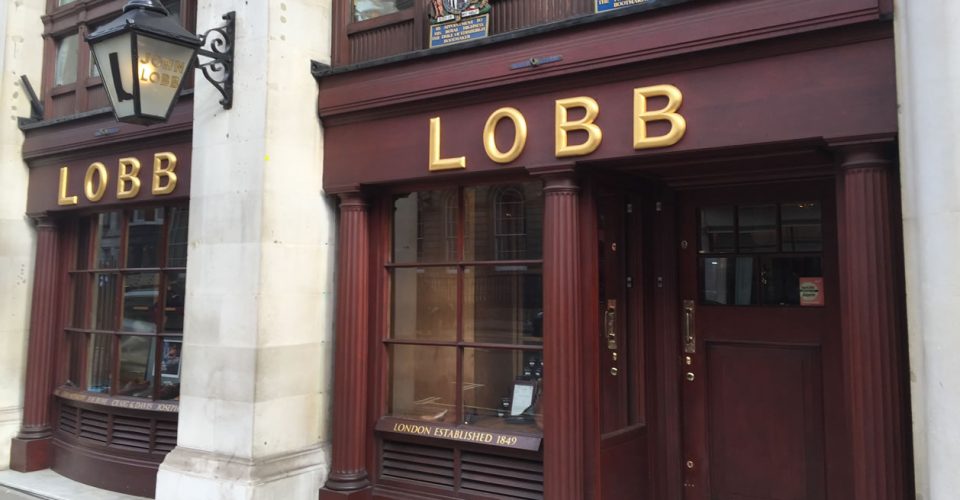 Shoes, I’d avoid brogues, but that might just be me being snobby. A smartly polished pair of Oxfords are perfect, while slip ons look a bit Euro and don’t quite work with morning dress. John Lobb make the things from scratch which is ever-so-smart, Jermyn Streeters Church’s are a steady buy, but you can probably get away with M&S, leather soles if you can… Just avoid anything patent and silly shiny because you’ll look like a tap dancer.

You’re not a twenty-something woman on that crucial third date. The collar does not have to match the cuffs. While you can just wear your normal work shirt, the really posh approach is a collarless shirt with a detachable collar (not that you’ll ever detach your collar). And then you can mix shirt colour with a stiff white collar. I’m sure that you can get a lovely shirt from Turnbull & Asser or New & Lingwood, but to get a good deal on a nice shirt go to London’s legal district and pick up something perfectly good but for half the price. Try Stanley Ley on Fleet Street, double cuffs and no pocket (useful rule of life) also get a couple of collar studs (legal outfitters have a better selection of studs than anyone else because barristers wear these things the whole time, the butterfly studs are way better than the for the front, and make sure you specify you need a back stud for the back).

Collars, however, can be tricky to get right. Totally my choice here, but a deep collar looks a lot smarter, for which you’ll pop over to Jermyn Street and pick up a stuff Cameron stiff. Make sure to buy something half a size bigger than your normal size (otherwise it’ll chaff you to death and you’ll be swivelling your head like a robot all day). Unless you can get it properly starched and laundered, you’ll probably only wear this thing once but be careful as you put it on not to crease it as you basically can’t rescue it after. I’d advise getting two, but at £25 each you’re already racking up the costs.

Waistcoats To Get Wasted In

Waistcoats are where you can inject a little (but not too much) personality. Avoid anything shiny or patterned like the plague, grey is fine or pastels are good too. Not black, you’ll look like an emo puffin. Personally I think a double-breasted waistcoat looks infinitely better, but avoid an exposed midriff, it must overlap the waistband of your trousers! You can pick up a relatively cheap (emphasis on ‘relative’) from Ede & Ravenscroft, again, or there’s a somewhat esoteric tailor in Fulham called David Saxby, slightly curious fellow, may still be doing jail time, but he was marvellous when it came to waistcoatery, if you can track him down…

Dos And Do Knots

Wear a really nice tie, you can get a second hand Hermes tie from eBay, or else something smart and not too wide, you don’t want to look like you’re a footballer on a court appearance. If you went to a nice school or served in a smart regiment then you can just grab your old boy number, but don’t wear someone else’s because it’s the one place that someone will put you on the spot if you’re interloping as an undercover O.E. 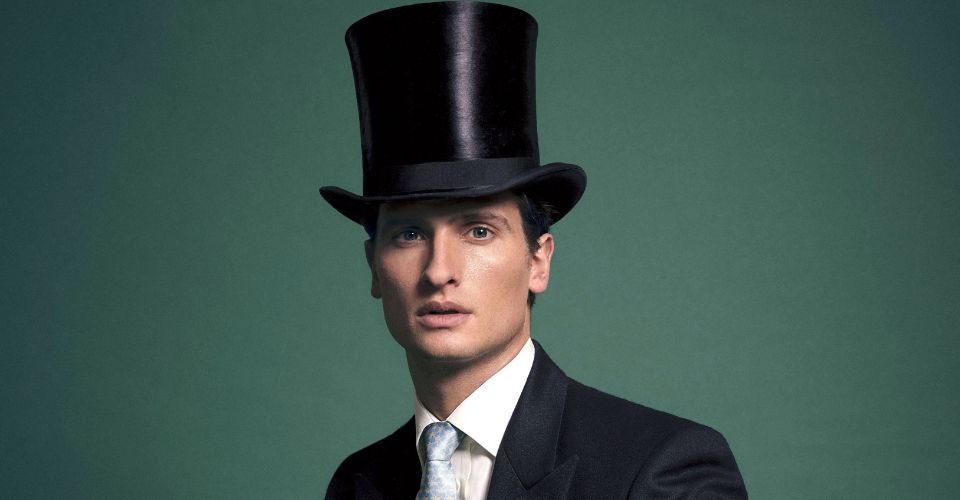 And this is the biggie: top hats. The whole outfit hinges on the topper; get it wrong and you’ll look like the doorman at a second-tier hotel, nail it and you could saunter in in Speedoes and still be welcomed like the prodigal son (the gospels do not relate, but I’ll bet he was wearing a Cristy). Rule of thumb, you want a black silk top hat. The problem is that they haven’t made these for decades (the mercury required is banned under EU law – mad hatters for Brexit etc). This means that they’re all antique and expensive. Especially as men 50 years ago had, in general, smaller heads. So a large size black silk top hat will likely set you back around £2,000. If you’re buying, scour flea markets, eBay and so on with a view to picking up a bargain and getting it done up. Your alternative to investing (and they’ll only get more valuable, providing you don’t lose it, bash it or barf into it), is to rent one.

If black’s out, personally I feel that the hairy modern sort just look like you shrunk a busbie in the laundry, so you’re onto grey. It’s always going to be second best (even though aficionados will tell you that it’s correct because it’s day time and black should only be worn at night), get a really nice, clean hat. With all these hats, you want something tall, if it’s stumpy then you’ll look like a failed magician.

Also, unless you’re in a box, you’ll have this thing on the whole time, so make sure that it’s comfy, too small and you’ll be balancing it like a circus entertainer, too big and it’ll ride down over your eyes every time you move. If it’s marginally too small you can normally pad the leather band inside with newspaper, which should fix any issues.

Finally, a crisp white pocket hanky and a wooden handled smart brolly (it goes without saying, no golf umbrellas, wandering round with a bright red PING umbrella looks a bit naff) go down very well. If you’ve a pair of nice, leather-cased racing binos over your shoulder, you’ll look like you know what’s what even if you choose your horses based on how pretty the jockey’s ‘pyjamas’ are.

And there you go, you’re ready to head to Royal Ascot. With the exception of the top hat and binoculars, all this can be recycled for wedding season too, so the expense can be offset somewhat, but this guide should keep you looking dapper as you go to the races. All you need now is your name badge, or someone else’s if you’re interloping on a cancellation. You’re good to go…