When I picture a food arcade, I imagine screaming kids running around and sticky, faded canteen tables flooded with scrunched up napkins splattered with tommy K, trampled fries looking like dolled up cigarette butts, and half eaten micro-ed jacket spuds sprawled everywhere. In my mind, it’s chaos. So when we heard about the Arcade Food Theatre, we pushed it aside thinking it’d end up being just another crowded food court. But oh boy were we wrong.

Arcade Food Theatre, located on the ground floor of the Centre Point building, is a new swanky dining experience featuring six of London’s finest independent kitchens, a coffee and bakery counter, three conceptualised bars, an outdoor terrace and ‘the loft’. So you can forget the trashy chains that make up your local shopping mall, this new dining concept celebrates independent eateries to the fullest, championing their specialities. Yes I’m talking to you katsu sando.

Of course, it’s no food arcade without food vendors coming for you left, right and centre. And these seven chic vendors are next level.

Move over Wagamamas, our new favourite katsu is from TŌU by TĀ TĀ Eatery. You’ve probably seen their famous katsu sando (sarnie to you and I) popping up over your Insta feed thinking what the f*ck. The trick to perfecting the sarnie is with enough sauce (or spread), and these guys have got the sauce to bread ratio down. And there’s certainly no skimping on the filling either! Forget the rice baby, it’s all about the dough. It’s springy, flavourful and fricking delish! 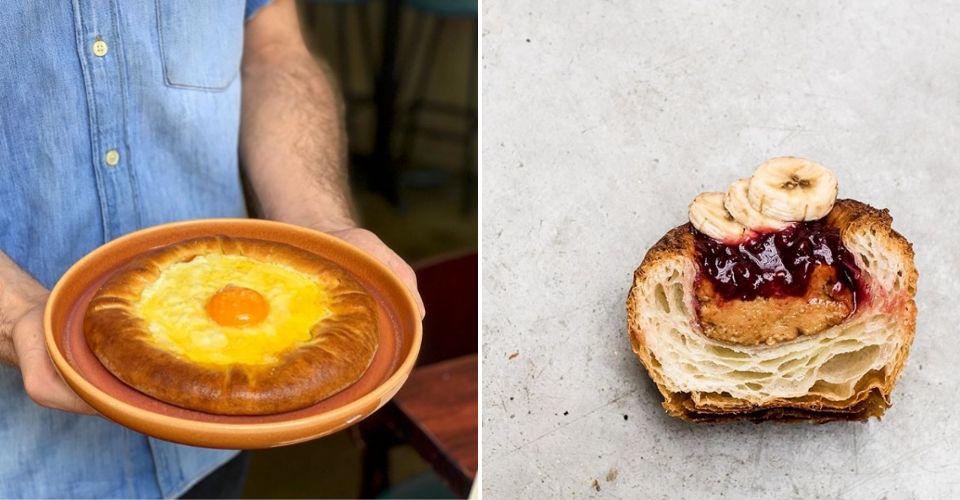 If you’re after a cheesy hit, you’ve gotta try the Black Sea cheese and butter pide from Turkish-Cypriot resto Oklava. It’s basically a giant cheesy flatbread with a giant ol’ egg yolk splattered in the middle but it sounds blooming delish!

Clearly we’ve got bread on the mind, as another one of the hits is Pophams Bakery, and they sure know a thing or two about a baked good! They’ve got pastries filled with fresh fruits, jams, and cream. We’re dying to try their fresh raspberry and coconut custard danish – apparently it’s an Arcade exclusive.

Amongst these eateries you’ll also find a new Mexican resto, Pastorcito, from the Harts Group; Lina Stores, an 75-year old London-born Italian joint; Casita Do Frango will transport you to the Algarve with their Portuguese staples; and Chotto by Chotto Matte will be serving up a Japanese-Peruvian feast.

You can thank Arcade Food Theatre as you won’t be finding a dodgy looking ‘Spoons knocking around here. Nope, there’s three conceptual bars awaiting you with some delectable cocktails to fill your boots with! Over in the loft cocktails will be mad with individual tastes in mind, inviting guests to choose their own flavour profiles and garnishes.

So if this sounds up your street, you’ll be glad to know Arcade Food Theatre is open for business! Find it at Centre Point, 103-105 New Oxford Street, WC1A 1DD, www.arcade-london.com