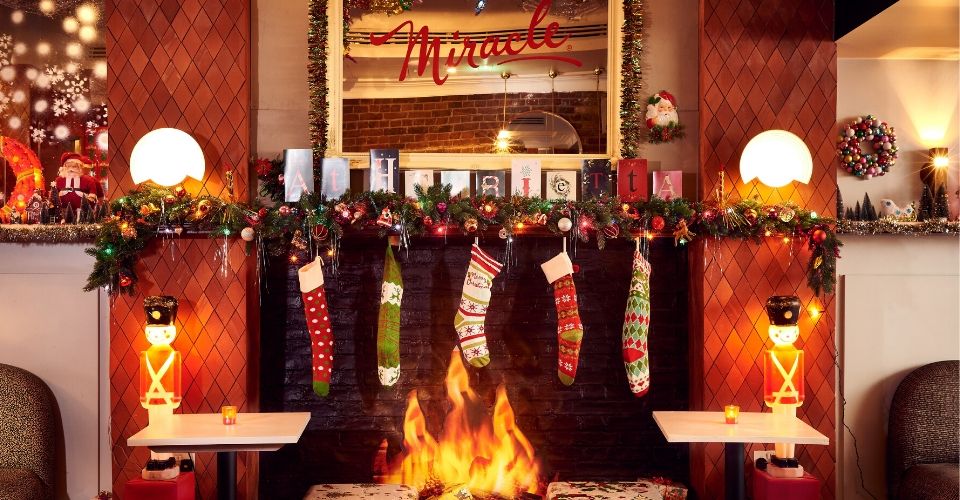 Somewhere between Guy Fawkes and New Year’s Eve the term ‘festive’ is pretty much applied to anything in order to flog it – and yes, we’re aware we’re part of the problem. From festive doughnuts to igloos and everything in-between, we’ve gone a little festive crazy in light of the big C word, until now. If there is one ‘festive’ pop-up this season that’s going to out-festive them all it’s this. And it’s guaranteed to make you feel, well, festive?

Covent Garden based hotel, the Henrietta have launched a Miracle Bar pop-up and, I mean, could it be any cuter? If you’ve not heard of a Miracle bar (don’t worry, neither had we) it turns out they’re pretty popular with our friends across the pond, and are HUGE in New York.

The vibe is kitsch, borderline distasteful, 70s flare – think creepy Christmas ornaments, tinsel, those weird shiny decorations that used to hang from your nan’s ceiling and plenty of fairy lights in Quality Street hues. Basically the complete opposite of anything you’d find in The White Company’s Christmas section. It’s like Christmas just threw up on itself. Kitsch and quirky the bars may be, but we’re into it.  And so it seems are lots of us all over the world – the bar started with just one standalone outpost in 2014 and now have over 90 throughout the U.S. Asia and Central America. That’s a lot of Christmas lights.

Drinks are designed by the talented lot at the Experimental Cocktail Club so you know they’ll be good, even if they’re served in something gloriously ghastly from the 70s.

And if you really want to push the boundaries of taste, crack out last year’s Christmas jumper and head to Miracle on 2nd December for what the global team are pushing as the ‘world’s largest combined ugly sweater gathering.’

If you’re not feeling festive after a trip to the Miracle bar, who even are you, The Grinch?