Move over fashion influencers, it is now the foodies and fitness influencers that are gaining all the followers and likes on social media from around the world. To be up to date with all the latest food trends or hottest workouts, these are the people to follow.

London is at the heart of the food scene of the world. Therefore, it comes as no shock that it is home to some of the best foodie influencers. Gone are the days where you would have to rely on a catch up with your foodie friends to learn about these quirky pop-ups or the latest trend in food, it is now a world played out on the digital waves, especially Instagram through ever so perfect snaps. Maybe its Clerkenwell Boy exploring London attempting to find London’s best eats and teaming up with SUITCASE magazine for the Cook For Syria initiative tickling your fancy, or it is sugar and gluten free superstars, Hemsley and Hemsley, showcasing their mouthwatering bakes and salads. You have just got to ask yourself, what do you eat next? 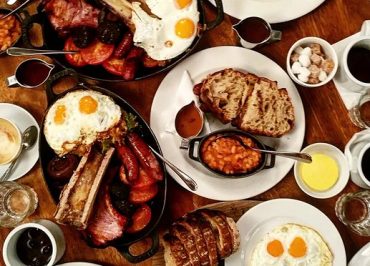 With over 150K followers, it is fair to say Clerkenwell Boy is one of the most top followed Instagram foodies. He now uses his influencer status for good cause, for example, teaming up with SUITCASE magazine for the Cook For Syria initiative. The initiative invites top London restaurants and top chefs to put a Syrian inspired dish on their menu, with £2 from every dish sold being donated to UNICEF UK’s Children of Syria Fund. Other than that, Clerkenwell Boy’s feed is full of tempting pictures of food, inspiring you where to eat next.

Known for her dairy free and gluten free recipes, Deliciously Ella was inspired herself to cut out sugar and gluten due to chronic illness, which left her sleeping almost 16 hours a day. Her recipes all champion fruit and vegetables and they’ve attracted to her Instagram feed and blog over 1m followers. She has also gone on to release a recipe book and manages a recipe app.

Hemsley and Hemsley are Jasmine and Melissa Hemsley, two sisters who create gluten and sugar free recipes, advocating the old ‘meat and two veg’ idea. They’ve garnered over 270k followers on Instagram, and also have a strong following on their blog. It’s led them to catering to top clients such as Chanel and Vivienne Westwood, they’ve released a number of books and also contribute to Vogue and The Guardian, and they’ve a programme on Channel 4.

London Cheap Eats, founded by Leyla Kezim, centres around finding the most fresh and filling food in London for under £8. They highlight hidden gems and foodie places off the beaten track, all while not breaking the bank balance! Their Instagram attracts over 28k followers and Leyla’s personal account attracts 89k.

Protégé of Jamie Oliver, Anna Jones, is behind this Instagram/blog which attracts 112k followers. As well as keeping up her own blog, she writes for The Guardian and The Pool with recipes that all put vegetables at the centre. She’s also worked with Antonio Carluccio, Yotam Ottolenghi, Sophie Dahl and the Fabulous Baker Brothers, as well as working for brands such as Innocent with whom she wrote a book titled Hungry?

Followed by over 34.6k people, London Food, is the go to Instagram account for any foodie visiting the big city. Showcasing the best food London has to offer from the mouthwatering brunches to the sweetest of desserts to the never ending street food stalls. Head to this Instagram to plan your perfect foodie day, week or month.

With over 36.8k, Vegans of Ldn is the go-to place to find the best vegan food that London has to offer. The account is run by yoga teacher by Serena Lee, who has worked her way through London to find the best vegan treats. From picture perfect cupcakes to the most refreshing juice bars to showcasing the best new and upcoming vegan-friendly brands.

It is no surprise that brunch lover Mondomulia has gained over 56k followers on Instagram. With a feed fulfilled with homemade bakes and reviews of London’s hottest restaurants and coffee shops, it is certainly a go-to Instagram for when you’re looking for that impressive brunch to wow your friends when they are visiting in London.

Australian born but now living the London life is James Thompson, the face behind Food Feels, with over 85k followers. An Instagram purely focused on all aspects of food from street markets, cafes, bars, restaurants and hotels. James, has recently launched his own online marketplace (Sweet P Social) for brands and social influencers to search and collaborate with each other.

The Cutlery Chronicles, founded by Leyla Kezim, that’s also the foodie genius behind London Cheap Eats. Follow Leyla Kezim on her non-budget food adventures around London and beyond. From bottomless brunches to the most Instagrammable doughnuts, this account will give you complete food envy and it may just make your tummy rumble.

As we all become more and more health and fitness obsessed, fitness influencers are taking the world by storm. Say goodbye to your short lived fad diets and hello to the hottest influencers to transform your body. From Kayla Itsines, helping you get your dream bikini body or maybe, Joe Wicks, is for you with his SSS plan. Who is going to inspire your next sweat session?

Australian blogger Kayla Itsines has catapulted to fame through Instagram, now with 6.2m followers. She is creator of e-book series Bikini Body Guides, often abbreviated to BBG and owns a meal planning and exercise app called Sweat with Kayla. She has been named by Times as 1 of the 30 most influential people on the internet.

The Body Coach, otherwise known as Joe Wicks, has amassed 1.7m followers, landed a television show and released a cookbook. He is primarily a fitness coach, and creator of the 90 day SSS plan. He passionate about inspiring others to exercise and eat well and is an advocate of long term plans rather than short fad diets.

Alice Liveing is behind the moniker Clean Eating Alice, and as her name suggests is an advocate of clean eating. This involves limiting sugar, salt and processed foods. Alice also encourages engaging in intensive workouts and often posts videos of herself in the middle of a workout. She has an Instagram following of 500k.

Yoga Girl, a.k.a. Rachel Brethen is of course passionate about yoga, and with 2m followers, it’s clear she inspires people with her passion. She undertook yoga teacher training in Central America and in 2010 found permanent residence in Aruba, where she teaches yoga full time. She is also founder of www.oneOeight.com, an online platform for yoga, meditation, and healing and is the most successful crowdfunded yoga project of all time.

UK personal trainer and fitness blogger has gained herself 101k followers. Her Instagram feed is full of pictures and videos of her during workouts and every so often she posts her meals. She has won blogging awards and through the support she’s gained is due to release an e-book.

London-based fitness addict and face of Nike and JD sport women, Chessie King has gained herself over 74.2k followers over on her Instagram. Chessie’s feed is full of pictures and videos of her workouts and the occasional post on her delicious nutritious food and some of London’s best places to head to for that naughty treat.

You've successfully registered for our newsletter!
Click to hide this message
5 Igloos You Need To Know About This Summer No spam, just great London inspiration into your inbox every day
Thanks! Your submission was successful!
By entering you are accepting The Handbook's terms & conditions and allowing The Handbook to contact you. I'm okay without this in my life