The UK’s first floating lido has been earmarked for Canary Wharf, with planning permission sought to turn a 180-foot Dutch barge into an open-air swimming pool, replete with sauna, plunge pool and spa as well as space for well being and cultural events. 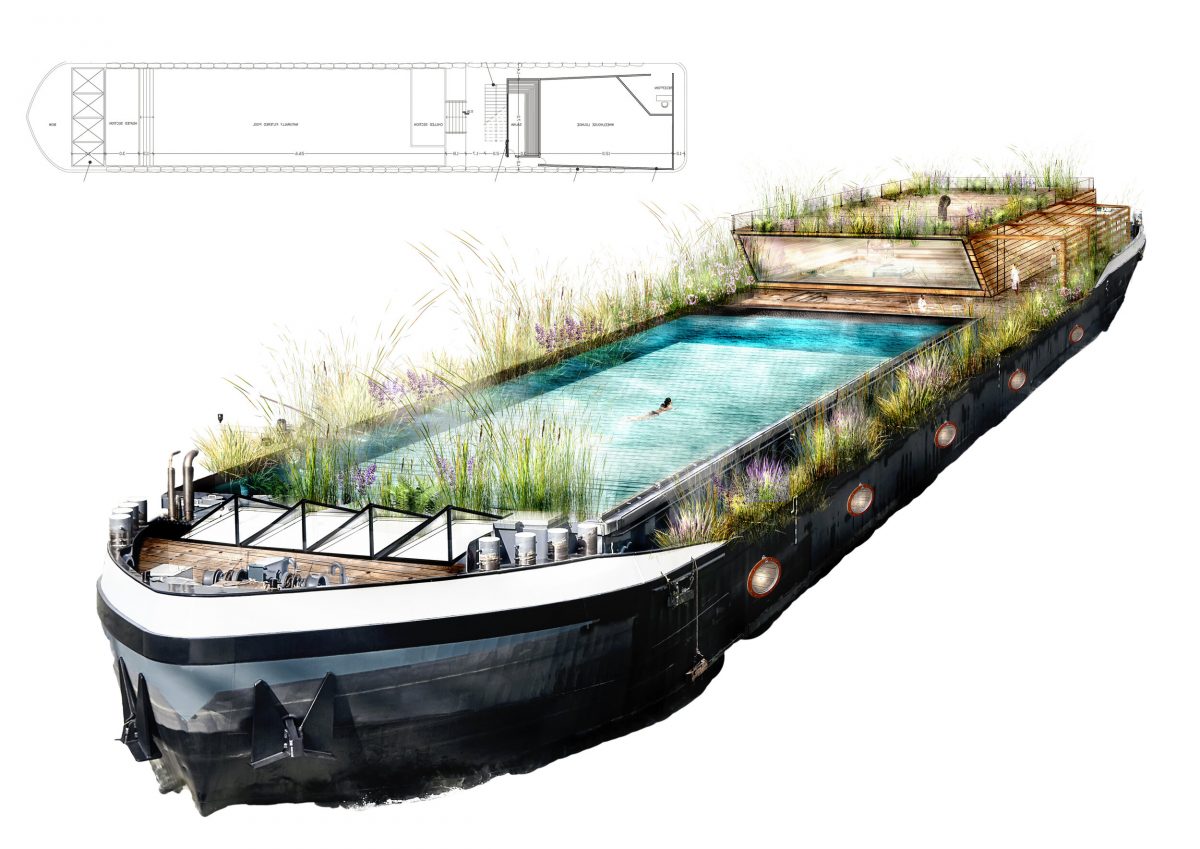 The project, known as Water Cures, is the brainchild of bodywork therapist, Nico Thoemmes. To spare you the time of Googling ‘bodywork therapist’, it’s a bit like massage. But more than massage. Thoemmes says ‘ I wish to create a new spa culture in the UK doing away with ‘luxury’ and ‘pampering’ and instead share the mental well being, physical recovery and social benefits of the spa’. Personally I think I’d miss the pampering, but the scheme has caught imaginations.

His vision includes a pool filled with water that isn’t chlorinated but rather is drawn from the dock and then  “naturally filtered and heated” (mmm, dock water) and don’t expect lanes, whistles and ‘no bombing’ signs, instead swimmers will have to push through “floating reed beds” and vegetation.

Facilities include pay-as-you-go swimming and spa passes across same sex and mixed swimming sessions, a lounge serving ‘on trend drinks & snacks’ (don’t give me any of that unfashionable matcha), natural therapies and treatments as well as a Finnish sauna and a hammam steam bath. There is even a spurious plan afoot to conduct research into the medical benefits of saunas and plunge pools.

The outlandish plan, which will moor in West India Quay, is a little more rooted in reality than it may at first sound, floating lidos are already a thing in Paris, Berlin and New York. But it sounds like London’s may be the whackiest of the lot.

You've successfully registered for our newsletter!
Click to hide this message
15 Tips To Help You Sleep Better In A Heatwave No spam, just great lifestyle inspiration
Thanks! Your submission was successful!
By entering you are accepting The Handbook's terms & conditions and allowing The Handbook to contact you. I'm okay without this in my life