You’ll always remember where you were for the world’s biggest news events, from the opening of the 2012 Olympics to the morning of the Brexit result. And now there’s another iconic moment, up there with the JFK shooting: where were you when IKEA released the recipe for meatballs? At home, probably.

The Monday afternoon IKEA release dropped like a Beyoncé album, with no fanfare but to maximum effect. Whatsapp groups lit up as the recipe did the rounds, the internet broke and sales of pig and cow shot through the roof. It was the meatball equivalent of that Kim Kardashian ‘booty’ picture.

Missing your IKEA meatball fix? We’ve created a recipe for you to recreate this delicious dish in the comfort of your own home #IKEAmeatballs pic.twitter.com/d89lRsJxH7

So what’s actually in an IKEA meatball? A question you probably never really wanted to know the answer to turns out to reveal a surprisingly acceptable answer, and it doesn’t include a shopping list of E-numbers.

Firstly you’ve got the curious bedfellows pork and beef (do you think they ever met on the farm?), and you need 500g of beef mince to 250g pork mince. Add to this a finely chopped onion, a clove of garlic (crushed or ‘minced’, you choose), 100g of breadcrumbs, an egg, ‘5 tablespoons of milk’ (presumably not heaped) and ‘generous helpings’ of salt and pepper.

We assume at the end of this process you should be left with at least five screws and an importantly looking hinge by your cooking bowl for literally no apparent reason in accordance with IKEA tradition.

The actual cookery bit is relatively simple and because it’s IKEA style they skim across it in a few unclear instructions that are relatively scant on detail (like, what’s medium heat?). To be fair, though, how hard can it be (the nation will decide at around dinner time tonight)? 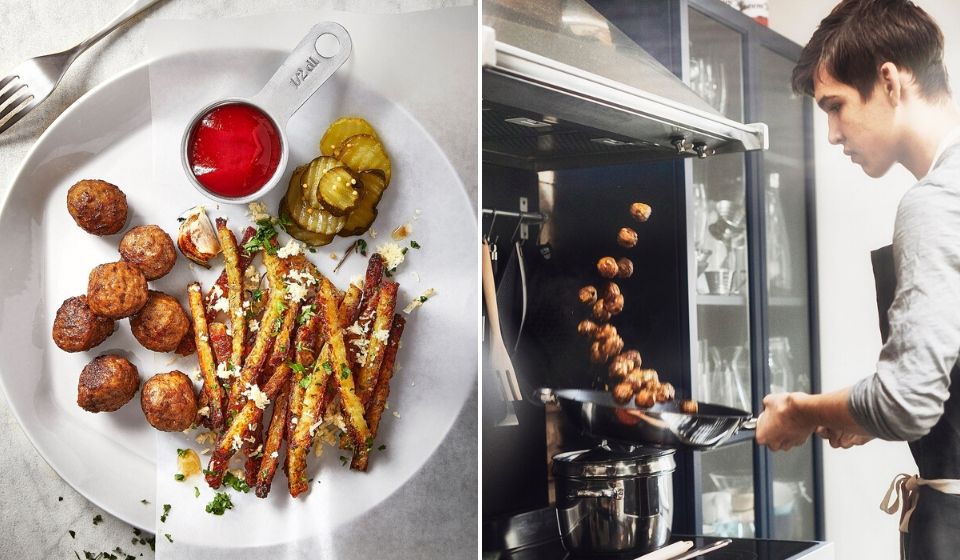 And hey presto! You’re nearly there. Now you just need that brown sauce they douse it in. I’ve never even questioned what it is, but we learn it’s ‘Iconic Swedish cream sauce’. The ingredients are actually more varied than the meatballs themselves, with ‘a dash’ of oil, 40g butter, 40g plain flour, 150ml veg stock and the same of beef stock and thick double cream. Add in two teaspoons of soy sauce and a teaspoon of Dijon mustard.

Cranberry sauce is totally optional and won’t be darkening my plate any time soon. Add in chips and you’re ready to go. Enjoy!

But, of course, while it’s very giving of IKEA to share their top-secret recipe, the chances of you creating anything similar to the classic IKEA meal are slim. And that’s because you’re missing the key ingredient. Desperation.

Firstly you’re not exhausted after a morning getting thoroughly lost in the shop’s one way system, you haven’t tried to unsuccessfully fit 12 Billy bookcases in the back of your hatchback, you’ve not got three screaming kids in tow or battled a scrum of Croydonites to get to the front of the restaurant queue, only to realise there’s no seating left.

IKEA’s famous meatballs aren’t just about various meats squashed together and fried, they’re the reward for four hours of complete misery. And that’s a recipe that only an IKEA cafeteria can replicate perfectly.