The whole last weekend of October, sexy ‘dead’ nurses and terrifying clowns will be a regular feature on tubes across London. But where is everyone headed? We have rounded up 14 of the best Halloween happenings taking place across the weekend, everything from medieval banquets to sky high parties, black cocktails and a themed afternoon tea so that everyone can embrace the year’s spookiest celebration.

Aqua nueva are adding a touch of gothic glamour to the festivities this year, with their first ever Halloween party. Collaborating with Veuve Clicquot, the event will mark 150 years since the death of ‘The Grand Dame of Champagne’ herself, Madame Clicquot. Skulls, lace and glittering beetles will adorn the venue whilst entertainment comes in the form of a Tarot reader, magician, silhouette artist and Black Swan dancers, with a DJ until 3am.
Saturday 29th October

One of London’s most stylish new restaurants, Bronte, has created some spooky dishes for Halloween. First up, a suitably orange brunch dish; pumpkin and tumeric pancakes and topped with a dollop of pumpkin puree, crispy chilli and a cloud of fairy floss – why not get a Bloody Mary to wash it down?! The Ashes To Ashes cocktail is black thanks to activated charcoal powder, Irish whiskey, Falernum (clove, almond and ginger liqueur), spiced pumpkin puree and tonka bean bitters. Tumeric and charcoal; who’d have thought Halloween could be so healthy?

Halloween at the Top

Witches will be circling the city this Halloween, as Sky Pod Bar at Sky Garden hosts a night complete with creepy cocktails and scarily good live music. 9 piece band The Soul Jets will be taking to the stage as will Juke Joints with DJs taking control later on in the night. Costume is of course encouraged and if you want to go VIP, dining packages are available in the Darwin Brasserie.
Saturday 29th October

Veuve Clicquot are a busy lot this Halloween as they take their Meet the Widow concept to the Booking Office bar in St Pancras Renaissance Hotel too. Guests are encouraged to don their finest Victorian gothic dress (think Queen Victoria in mourning), cape or mask as they indulge in Champagne and canapes. Live jazz performances and a DJ until late complete the evening.
Friday 28th October

There’s few places more appropriate for a Halloween party than the Grade II listed vaulted cellars beneath St Katharine Docks, not far from the Tower of London. The Ivory Vaults will be hosting a medieval banquet with a 4-course menu made up of pumpkin soup to start and apple pie to finish. Dress up, head down and get spooky.
Wednesday 26th to Sunday 30th October

Indulge in a frightfully good treat at London Hilton on Park Lane as they’ve given a ghoulish make-over to a favourite afternoon staple. Available from 24th to 31st October the Spooktacular Afternoon Tea will consist of a selection of sandwiches and scones plus sweets like chocolate parfait with praline feuilletine, elderflower jelly on chocolate sponge and green apple gel with white chocolate.

Internationally famed cabaret star Dusty Limits will take over Scarfes Bar at Rosewood London for one night only on the 29th October to treat guests to a macabre burlesque performance. The venue will undergo a ghostly transformation to become the haunted library of a spectral manor house while the bar will be serving up the specially concocted “Eye Spy” cocktail in addition to their other popular favourites.

If guts, gore and spooky happenings aren’t your sort of thing but beer, cider and ale is then you need to head to Le Gothique for their 8th annual Halloween beer festival. Taking place in the suitably eerie Grade II listed building on Wandsworth Common between 26th and 29th October they’ll have over 100 cask ales, 25 ciders, 25 beers as well as an international keg bar, live music and street food. Our tip, go as early as you can, so you can have your pick of any of the beers, by the weekend the list tends to shrink.

Leave the kids at home for this circus

The rooftop bar at Mondrian London will be transformed into a hellish Big Top on the 29th October as it hosts Twisted Circus. Guests will be treated to specially created Halloween cocktails, music from DJ Henry Relph and a Halloween Makeup Artist will on hand to aid guests’ terrible transformations for the event. Grab your Early bird tickets now as they include Champagne on arrival.

All 8 Dirty Martini venues will be the perfect location for a night of mischief on the 29th October as they each transform themselves into bewitching watering holes. Adding the devilishly good Spiced Pumpkin Flip to their stellar line-up of cocktails, the sumptuous serve combines Goslings Dark Seal rum, gingerbread syrup, cinnamon syrup and pimento dram, with Apple, Orange and Lemon juice, garnished by a light dusting of the fiery espelette pepper.

MeatUp in Wandsworth are serving up a truly creepy halloween feast on the 28th and 29th, the three course corpse menu. If you get squeamish then just remember it’s all a trick. Their human brain burger isn’t actually it’s human, it’s lamb. Jellied witch head terrine with pickled eggs and tombstone toast is in reality pork terrine and a bone marrow brulee with severed fingers is….well actually we don’t know. You’ll have to find that one out, but we haven’t seen anyone walking around Wandsworth with no fingers – yet.

This Halloween, Bodo’s are presenting Dead Famous Halloween. Starting on the 26th they’ll be showing the creepiest horror movies at their scary movie chalet cinema, along with a feast of Halloween treats – you’re going to need something sweet for those sugar levels. Then from Thursday they are turning into Drop Dead Donnerstag Halloween special an evening of Horror’wood Glamour then throughout the weekend you can dine with the dead. Dressing up is compulsorily and anything Halloween goes, so no excuses, you don’t want to be the odd one out.

If you know all the words to Rocky Horror Show or have the Thriller dance down to a tee then step right into Lucky Voice. Except it isn’t Lucky Voice, it’s a den of darkness. Gone are the brightly coloured wigs and giant sunglasses you’re used to donning when you get there, instead you’ll find limbs, fake blood and plenty of gore. To drink will be cocktails like the Dark and Stormy and Trick or Treat – four shots, two are tricks and two are treats. The Halloween playlist will include tracks like I Put a Spell on You, Monster Mash and Bat Out of Hell – now if you sound like a dying cat when your sing you can just say it’s all part of the Halloween act…
At both Soho and Islington Lucky Voice

Thirteen, unlucky for some. And it certainly was for Woolf Joel, who hosted a dinner at The Savoy in 1898. His fourteenth guest dropped out at the last minute, but the dinner party continued with just thirteen guests, despite being told by a superstitious diner that the first person to leave the table would die, Joel took that risk. He was shot dead a few weeks later…. After that The Savoy would have a member of staff sit with tables of thirteen to make it fourteen, but diners felt like they couldn’t discuss their private matters, so in 1926 Kaspar was created, a three foot high cat who sits at the table. This Halloween you can host a private dinner at The Savoy for thirteen guests, the five course menu will include the likes of bloody beef and pumpkin pie. The question is, are you brave enough to sit without Kaspar at your table?

If you want a taste of Halloween but don’t want to go all out, head to MARC Patisserie in Selfridges and try their pumpkin choux buns, filled with chocolate cream and chunks of pear. Scarily good. Available until Tuesday 1st November. 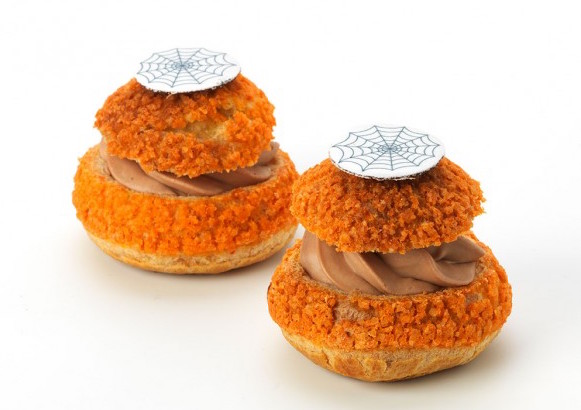