What? Six years after Barbecoa St Paul’s opened, Jamie Oliver’s ‘home of smoke and fire’ has come to Piccadilly, albeit a more formal/less corporate version that’s as popular for afternoon tea come the weekend as it is a midweek dose of meat.

New? Barbecoa Piccadilly opened its doors in February with a star-studded launch party for Jamie and friends. 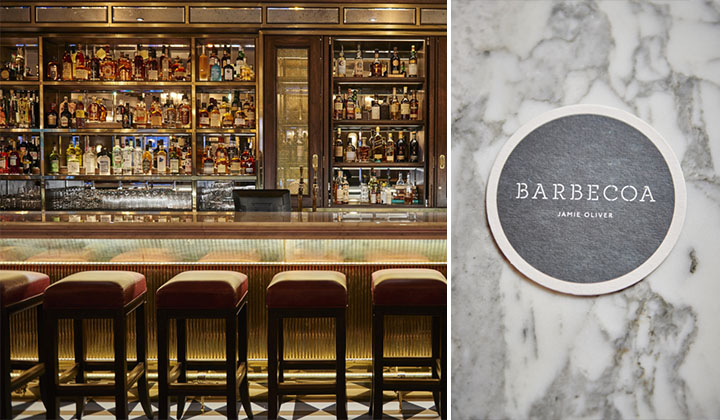 On the Menu: The Piccadilly site is in-keeping with the primitive fire and smoke concept of St Paul’s, although a spruced up menu offers even more choice with a huge range of cooking equipment (Japanese robata, Spanish Mibrasa charcoal oven, Argentinian grill, Tandoor oven and a Texan smoker) and a cold bar serving up fruits de mer platters, oysters, lobster and dressed crab so you can have a bit of surf with your turf. Breakfast, afternoon tea, bar snacks and Sunday lunch are also served, and children are catered to with their own menu – a good Jamie touch. The overall menu is sophisticated but with a few Jamie-esque twists; be it seaweed on the fruits de mer (he wants to encourage seaweed consumption that isn’t deep fried) or the Croque Barbie on his breakfast menu (worthy of a page in ‘Jamie’s Comfort Food’).

First Impressions: It was quiet for a Wednesday. Then again, the ground floor bar is vast and still had a nice atmosphere. The restaurant is downstairs and although not packed either it was clear that this is the epicentre of the venue, with smoke and flames rising from the semi-open kitchen at the far end. Other guests are dining in mainly groups, be it for business or for pleasure – the location attracts both. 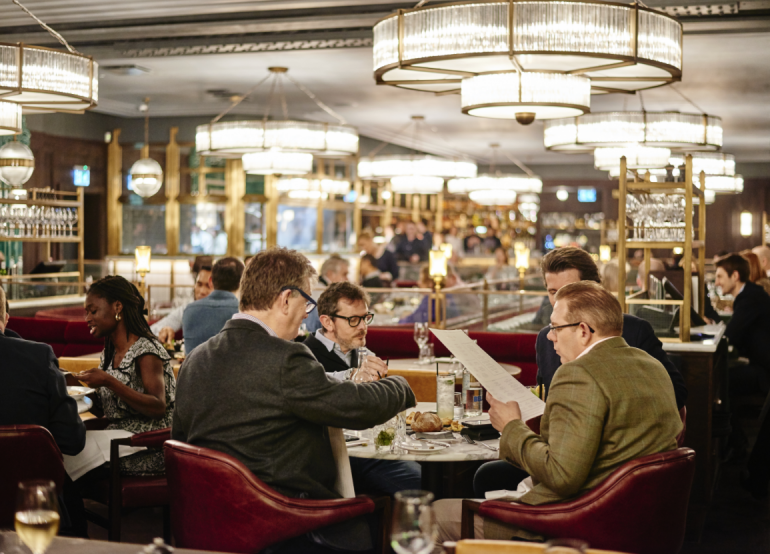 The Look: Heritage has been key in the design, which is heavily inspired by the Art Deco era thanks to a chance discovery of a 1920s restaurant reservation card when renovations were underway. The geometric border pattern from the card has found its way into the green wall tiles (which could be mistaken for an original feature) and the actual card was imbedded in the surface of our table, whilst contents of the unearthed time capsule hang framed on the wall by the cold bar. A nice story. Huge crystal chandeliers and soft deep red velvet banquettes make the space more feminine than the St Pauls site, whilst clever lighting and dark wood make it sophisticated and disguise the fact it’s a whopping 250-covers – there’s not a bad seat in the house. The bar is worth a mention too; bronze and mirror shelves showcase an extensive array of spirits and, if you glance over to the right, you’ll find the display of ageing meat; after two weeks in St Paul’s, the meat is transported here for six more weeks of dry ageing.

What We Ate: It’s probably more a case of what did we not eat but here goes… A classic fruits de mer platter was a real head turner and had the people on the next table asking what it was even though they’d just settled their bill. Huge smoked prawns and delicate clams and mussels are left to do the talking, whilst half the oysters are left naked and half are given the Barbecoa treatment, with jalapeños and a house Tabasco sauce. A pot of seaweed trailed over the edge of the plate; crunchy and salty yes, but your standard takeaway seaweed absolutely not. A smoked duck starter – one of Jamie’s specialities – was really very good, served with sweet yet tangy Champagne rhubarb sauce, crunchy hazelnuts and bitter leaves. Pork scratchings were a little on the thin side, though the portion itself was generous, and the apple ketchup deliciously tart. Short rib croquettes were another favourite, with a mildly spiced Gochujang mayo for wiping up. 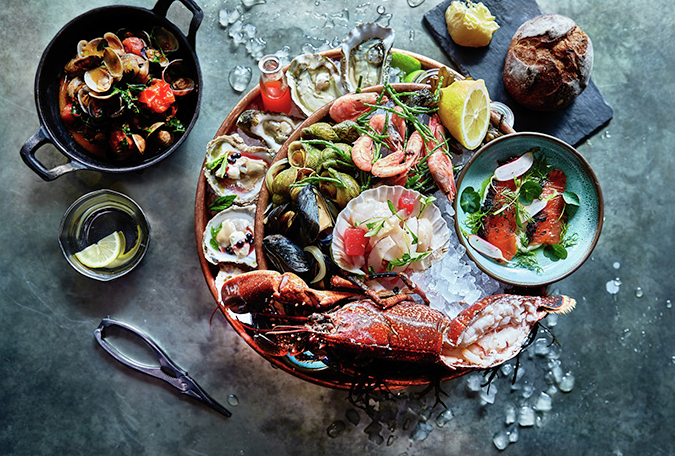 It’s hard to avoid steak here (and you shouldn’t want to) and a huge bone-in rib eye was even harder to avoid when it was brought to the table. Cue inquisitive looks from the next table (a different table to the fruits de mer enquiry) who could clearly see the hunk of meat was cooked to perfection, thickly sliced and sprinkled with rock salt. You don’t get the slice-at-the-table service that you get at many steakhouses but we didn’t miss it; the steady flow of sides and condiments unloaded from trays meant there was plenty to take in. The steak was absolutely the star of the show here, and of the three sauces it came with the Bordelaise was my favourite. Miso broccoli was a little light on the miso front and a simple garden salad perhaps a little bland but the Devil’s cornbread was far from it. One of the many American touches on the menu, I was introduced to the wonderful world of cornbread in (what I can only imagine) the best way. Strings of Cheddar trailed from the dish as you transferred it to your plate, whilst chunks of ‘Nduja stopped it being too rich. Please order this if you’re hungry.

Barbecoa do a pretty epic selection of desserts, and it’s something Jamie and his pastry team take a lot of pride in, with wine pairing a thoughtful addition. Surprisingly, the Barbecoa Brownie wasn’t quite worthy of its namesake – I found it a little too soft – and the PB.J was basically a pile of cream so save your calories for the Snickersphere. It’s every bit as good as it sounds, and more. A dome of creamy, salty, caramelly goodness, with chunky peanuts tastes exactly as you’d hope. Peanut praline, chocolate and vanilla parfait and liquid caramel are revealed when you break through the chocolate dome and a buttermilk sorbet breaks through the sweetness so that you can Carry. On. Eating. No surprises then that it’s their bestselling dessert… 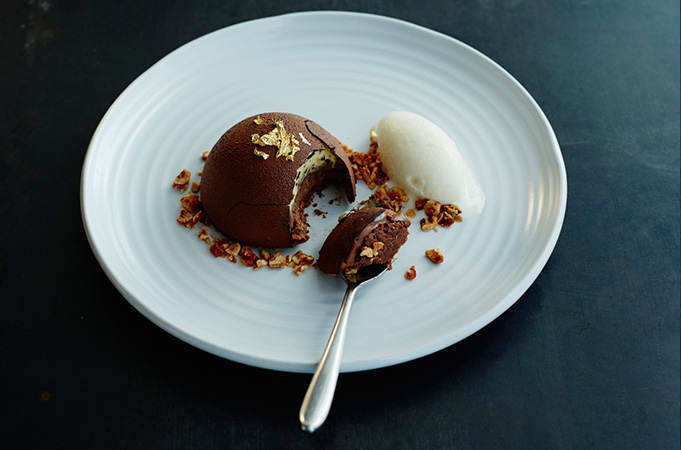 What We Drank: The bar hints at the calibre of cocktails available, which we saw for ourselves when we rounded off our meal with perfectly made espresso martinis. The glass-fronted wine cellar is a feature in itself, containing over 2,500 bottles, and an extensive wine list resulted in us drinking a popular English sparkling wine, NYtimber Classic Cuvee, a fairly sweet golden yellow Pieropan ‘La Rocca’ Soave with our seafood and a glass of crisp Colume ‘Autentico’ Malbec, chosen by our waitress and extracted by Coravin from a magnum.

Go With: If you can wangle a business meeting then do. If not then take your other half, or your mother for afternoon tea on Mothering Sunday.

Final Word: Barbecoa is a great addition to Piccadilly and whilst it doesn’t come cheap, a meal here is one to remember. Playful touches remind you it’s got Jamie’s name on it but the food is sophisticated and service polished (our waitress, Charlotte, was wonderful) which separates it from associations of his high street chains.

A 16-cover private dining room is named The Rose Gray Room in honour of Jamie’s former mentor at The River Café and is great for presentations, whilst a marble counter by the wine cellar can host informal tastings at no extra cost. A sure-fire way to impress potential clients.

Like This? Try These: The Kitty Hawk, The Wolseley, Hawksmoor Air Street