New? Brand spanking new, Blanchette’s Eastern venture opened its doors earlier this month, following on from the success of the original Soho site by brothers Maxime, Malik and Yannis.

First Impressions: Brick Lane is a long lane. Past the seemingly endless kebab shops and curry houses but not as far as the infamous Beigel Bake, Blanchette East sits unassumingly but confident near Bethnal Green Road, the soft sage green frontage and hungry lingering people the only clue of what’s inside. We were greeted like friends (a standard of service that was maintained all evening) and taken up to our table at the back of the restaurant, past a scattering of candlelit tables which gave the restaurant a civilised, laid back feel on a Friday night.

On the Menu: Blanchette is known for its French take on tapas. Small plates of classic French dishes include the signature crispy frogs legs with some Southern French/North African-inspired dishes making the cut on the new menu – a Moroccan lamb tagine and saffron cous cous in particular have set tongues wagging. 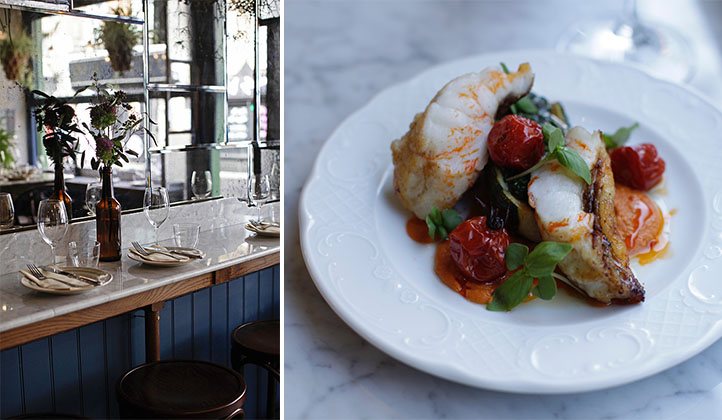 The Look: French bistro in style and in essence, Blanchette East is slightly bigger than its Soho sibling but no less cosy thanks to rich, heavy velvet curtains, dark wooden bistro chairs and soft lighting. Slightly more polished than Soho but still with an urban East London feel, the furniture here is all uniform and the walls not exposed brick. By no means a negative, on close inspection it is clear every detail has been considered, from the quirky illustrated nude printed wallpaper in the loo (which is actually fabric) to the artfully undone paint effect on the walls of the restaurant. The look matches the food perfectly; rustic, heartfelt and a little bit playful.

What We Ate: The menu, although made up of small plates, is split into snacks, charcuterie, cheese, fish, meat and vegetable. Ordering a handful of dishes we expected them to come as and when they were ready but they came in two lots, like a starter then the main course. Not a problem at all, it meant we could leisurely pick at wooden boards of truffle saucisson, wedges of comte with chutney and a bowl of mixed olives. All were impeccable although in future I could forgo the cheese to save room for what’s to come, or just have a platter of meat and cheese with a glass of wine for a light dinner. Bigger than expected and in a fine crispy batter, the four frogs legs came with a lovely smoky, tomatoey sauce for dipping and converted both me and my guest into fans.

The mains were the highlight for us. Lamb tagine at first appeared a smallish portion but apricots and huge chunks of slow roasted lamb were hidden under the smoky sauce with flaked almonds, lebna (yogurt) and chopped mint to garnish. Saffron cous cous was equally well garnished and equally as flavoursome, tossed with tabbouleh and dolloped with pomegranate seeds and yogurt. Garnishes are often overlooked but here they were what made the meal. Monkfish was impeccable too, with roasted baby tomatoes, courgette and puree making the plate as good visually as it was to eat. In hindsight, we would probably have only had one starter to keep enough room for the mains, of which we found three to be plenty. The balance of spices and depth of flavour in each dish meant that less is more.

We were almost too full for dessert but basil sorbet with fresh mango was intriguing enough to go for. Luckily we did; it was refreshing, not too sweet, and the perfect end to our meal with pots of fresh mint tea to end on a Moroccan note.

What We Drank: The brothers clearly know what’s good and so the wine list, although concise, doesn’t restrict itself to French labels. Italian and Spanish wines compliment the dishes and staff are knowledgable in recommending should you need help. The wines are mostly (not all) available by the glass (175ml), carafe (500ml) and bottle, which I love for those times when a glass is too little and a bottle too much. The two of us shared a carafe of 2013 Grenache/Syrah, Cote du Rhone Domaine la Mirandole which was lovely with our food. There is also a cocktail menu although we didn’t try any but if you find yourself without a reservation and needing to kill time before your table is ready, pull up a seat at the bar and have a look through.

Go With: As suited to a romantic date as it is a fun birthday dinner with close friends, Blanchette East would pretty much fit the bill for any occasion. There is a private area at the back of the restaurant which was being used when we were there, as well as a long table down the middle celebrating a birthday. Elsewhere, pairs of diners – both friends and daters – seemed equally impressed with things as we were and a queue when we left confirmed that.

Final Word: Still a little bit undiscovered, it won’t be long before Blanchette East is enjoying the same success as the original Soho site. The introduction of new dishes cleverly gives diners a reason to head East and the vibrant flavours and urban feel of the restaurant fit right in to the neighbourhood. If you’ve ever wanted to impress friends by saying “I know this great little place…” then this is that place. A new favourite.

Go if you like: Blanchette Soho, Ember Yard and Copita.