Slough, friendly bomb magnet and home to Europe’s largest trading estate; the place where Princess Margaret was cremated and David Brent was created, and exactly where you need to head for your next weekend getaway. Trust me.

Because if you take a short drive away from Slough itself you land yourself in the midst of a corner of England’s green and pleasant land so desirable that one street in Ascot records an average house price of £3m. Meghan Markle and Prince Harry live here, close to HM The Granny. And it’s in this leafy corner, beneath the Heathrow flightpath and within 45 minutes of central London that Dorchester Collection’s Coworth Park sits. 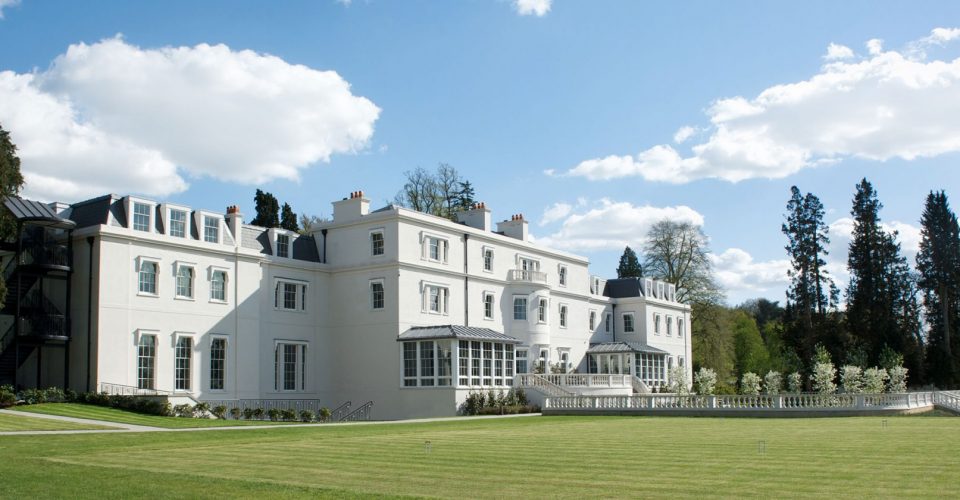 The main mansion at Coworth Park

Coworth Park is undeniably grand, best viewed as you traverse the long drive. Flanked by manicured lawns and hedges, the white mansion house looms, an iceberg bobbing on a sea of luscious green lawns, meticulously mown and rolled with the same diligence since the house was built in 1776. And the standard continues inside.

I’m sure you’ll spare your sympathy, but this job takes me to some of the best hotels across the globe, and yet Coworth Park has to be one of my all-time favourites, ranking damn-close to perfect. On arrival you’re greeted personally and warmly, not, thank goodness, in a fake American way but as though they actually are glad to see you. It may be an act, albeit one due a BAFTA nomination, but either way it’s a welcome departure from the aloof greeting indifference afforded by most five star establishments in the nearby capital. 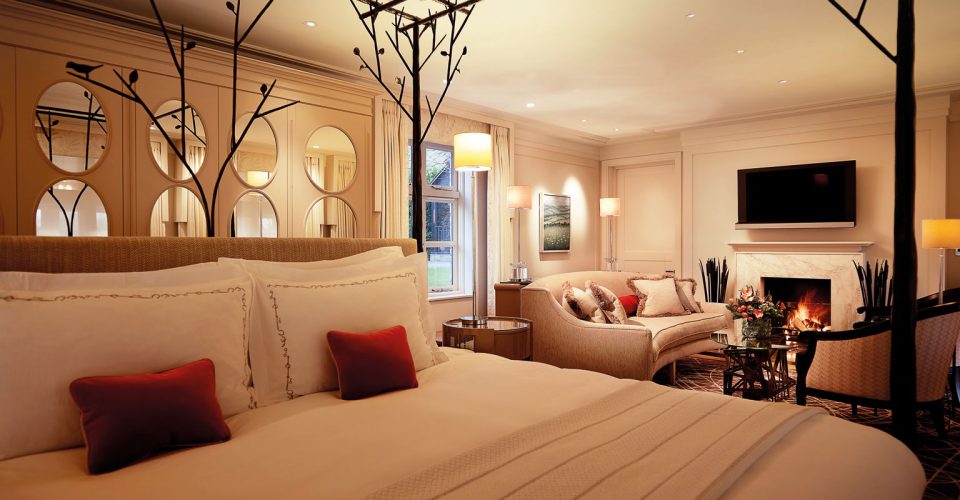 My room was on the second floor of the main mansion house (there are also rooms in the nearby stable-block), and by no means the smartest they have. And yet to say it was eminently comfortable would be to do a disservice. The ‘welcome’ bottle of Veuve Cliquot was more than welcome, as were the chocolate delicacies that were quickly demolished. The room was large, and not only was a requested cot provided, but along with various kiddie freebies including my daughter’s now-favourite toy,  an orange Coworth Park rubber duck.

As for the grownups, the junior suite is surprisingly spacious, with a marble-clad ensuite at least half the size of the bedroom itself, and a shower plus copper bathtub big enough to launch a fleet of rubber ducks. 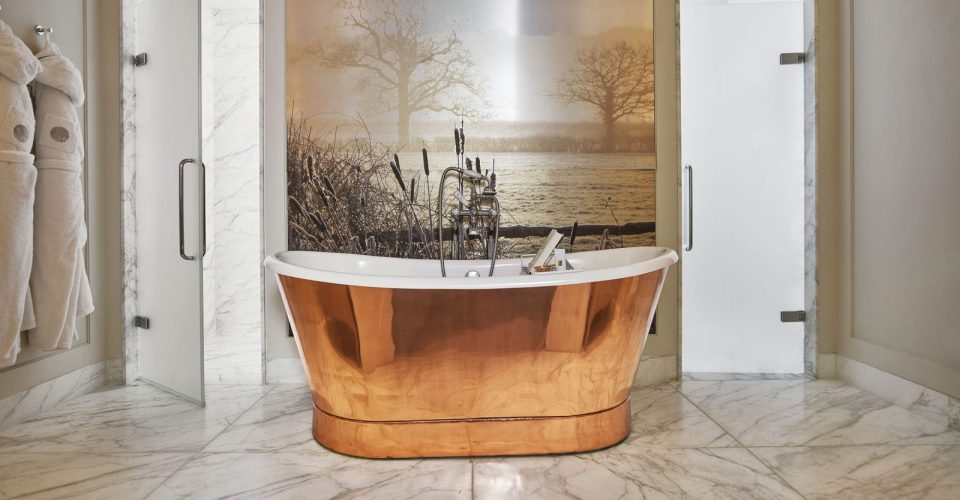 A copper bottomed reason to visit

It’s the little things that make you feel immediately at home, the handwritten note from the manager, freshly cut flowers, thoughtfully selected reading material. And it’s the hints of luxury that ensure you feel suitably treated, the Bang and Olufsen telly, carefully selected furniture, even the design of the modern four-poster bed, all leave you in no doubt that you’re being treated.

Of course, none of this comes cheap, a simple room in the stable block (a short walk or shorter golf-buggy ride from the main house) starts at £327 per night, while a mansion house junior suite starts at £590. But whether your pockets are deep enough for this to be loose change, or if you’re planning to save up the pennies to go, it’ll be worth it.

After a stroll through the extensive grounds, which take in a polo field, kitchen gardens, and a swim in an indoor pool set within the beautifully designed stylish spa (my nine-month-old daughter’s first ever swim, let’s hope she’s not got a taste for this style of living), it was time to enjoy the thing that Coworth Park’s particularly noted for, the food. 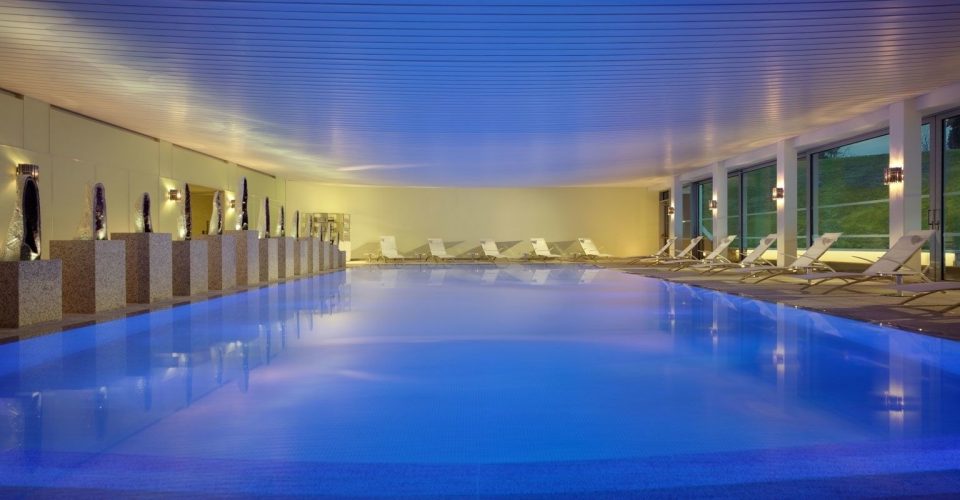 It turns out that being in the very lap of luxury isn’t enough to quell the screams of a nine-month-old intent on not observing bedtime, but as our dinner reservation slipped from 8pm to 9pm staff were entirely unfazed. While my wife worked her magic, part hypnosis, part pleading, I sat on the terrace sipping rosé and people watching as the sun set. The crowd at Coworth Park on a Friday night was eclectic.

On one table sat a gaggle of Middle Eastern dignitaries. a fleet of black Range Rovers waiting outside, deep in conversation, while on another a couple who were clearly here for a special anniversary, dressed to the nines and, judging from the battered Ford they arrived in, relative strangers to this milieu. The staff were equally courteous toward both tables, treating them as equals. 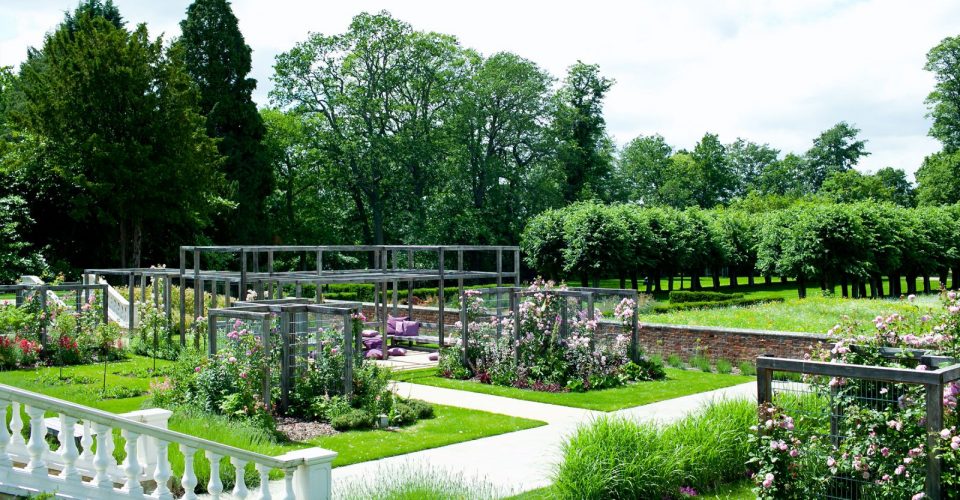 Decorative and yet functional gardens

Indeed, as I observed between sips of wine, waiters who in any number of London restaurants might have been incredibly snobby, went out of their way to make newcomers feel as though they belonged here as much as the selection of businessmen, the sweetly clueless Instagrammers and a twinset-and-pearls woman who could quite easily have been a royal Lady-in-Waiting, and me.

Parking my decidedly uncool Audi daddy-wagon a few hours earlier between an Aston Martin and Ferrari, a perilous reverse park with well over £300,000 of potential automotive damage at stake, I had wondered how easy it would be to fit in here. Thanks entirely to one of the best hotel staffs I’ve encountered, I needn’t have been concerned.

Baby finally induced to sleep and monitor set up we headed into dinner. Restaurant Coworth Park wears its Michelin Star and 4 AA Rosettes lightly, with simple decor completed by a curious hanging burnished metal rendering of a crown of oak leaves, a metaphor if you’re a journalist searching for one, for the way the restaurant crowns the hotel. 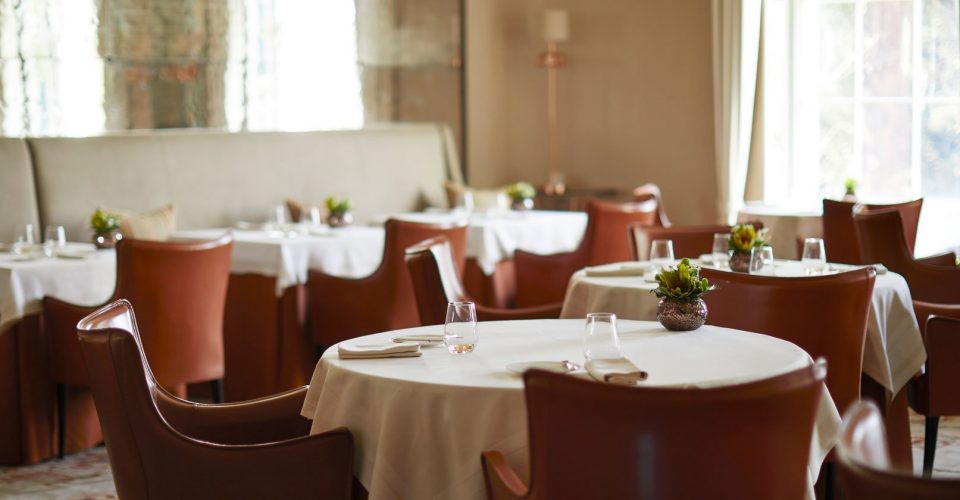 Chef Adam Smith (not the economist) has created a decided buzz around his cooking, it’s the last thing Prince Harry enjoyed the night before his wedding, and the modern British menu is decidedly delicious. Opting for the seven course tasting menu, with paired wines, was one of the best decisions I made all year (in a year my wife and I decided to have a second child, I cashed out a share portfolio at the very peak of the market and I got into motchi balls).

The tasting menu includes highlights like the caviar tart, butter-poached sole and Yorkshire grouse, all paired perfectly with a whistle-stop global vineyard tour thanks to friendly sommelier. It would be entirely understandable to make the trip to Coworth Park for the restaurant alone, indeed many do, but the surprising reality is that the restaurant forms only one of many parts, from the stunning grounds, the spa facilities and the gorgeous accommodation. 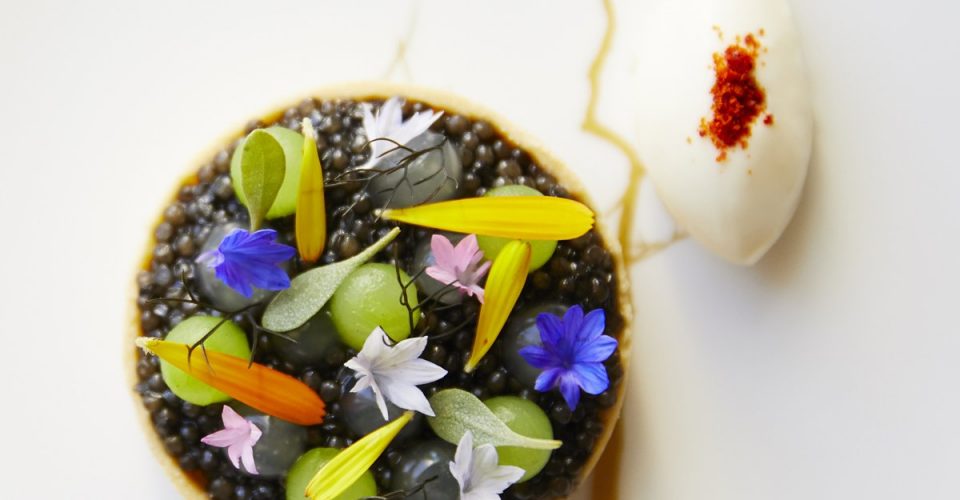 Food, just one reason I’ll be back

But what made Coworth Park special is what puts it beyond reach of its competitors. There are no shortage of hotels with great Michelin star restaurants, we feature them all the time on these pages; spas are two-a-penny and you only need to venture a mile or two out of the front gates to find a hotel as attractive or luxurious (give Cliveden a go, it’s prettier). But you’d be hard pressed to show me a hotel of its calibre where the staff are as welcoming, friendly and unprejudiced as they are at Coworth Park. And that’s why I’ll certainly be back. That and the bathtub.