Remember when we told you about the opening of Homeslice in Fitzrovia? Well finding ourselves in need of a cure to a miserable Wednesday we decided to head over to Wells Street to gorge ourselves on 20” pizzas and prosecco…as you do.

Walking up from Oxford Street I thought I had missed Homeslice it’s quite a long way down Wells Street, but there it was, the awning and neon pizza sign welcoming Londoners in from the rain. With Neal’s Yard being as successful as it is, they’ve kept the formula pretty much the same, great music, drinks on tap and a simple menu, but  as is often the way with younger siblings, this Homeslice is edgier than the original. Walls are decorated in chalk scribbles from guests and downstairs features a cocktail bar which is serving up seasonal cocktails. A cucumber margarita was delicious, whereas the Raspberry Fizz which had all the promise of a great a cocktail: combination of vodka (from East London Liquor Company), lemon juice and campari shaken with fresh raspberries and topped with frizzante prosecco, unfortunately was so pungent that it made it rather undrinkable. My friend commented that the bar is rather like  a cross between a cellar and an underground bunker and I have to agree, it’s dark,  windowless, with concrete floors and bare stone grey walls, with flickering candles, it’s minimalistic to the extreme. 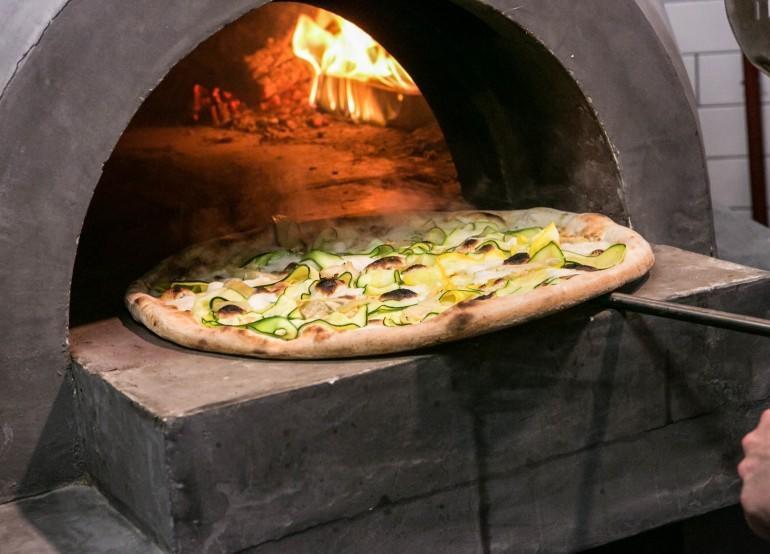 We proceeded upstairs to the restaurant, it’s all exposed brick wall, chalk boards and wooden tables and  it was packed with people eating pizza and working through bottles of wine. The menu is kept simple with crisp -based pizzas available either by slice or in whole 20” pizzas which you can go for the old half and half trick which is just what we did. Half sweet caramelised onion, anchovy, and olive mix and the other half a more exotic, goat shoulder, cabbage and sumac yoghurt topping. When they bring the pizzas over to you, you think, how, how will I finish this all? And then the two of you get stuck in and the pizzas are so crisp and so light that with good conversation and a steady flow of prosecco you forget how much you are eating and then bam you’ve eaten it all. 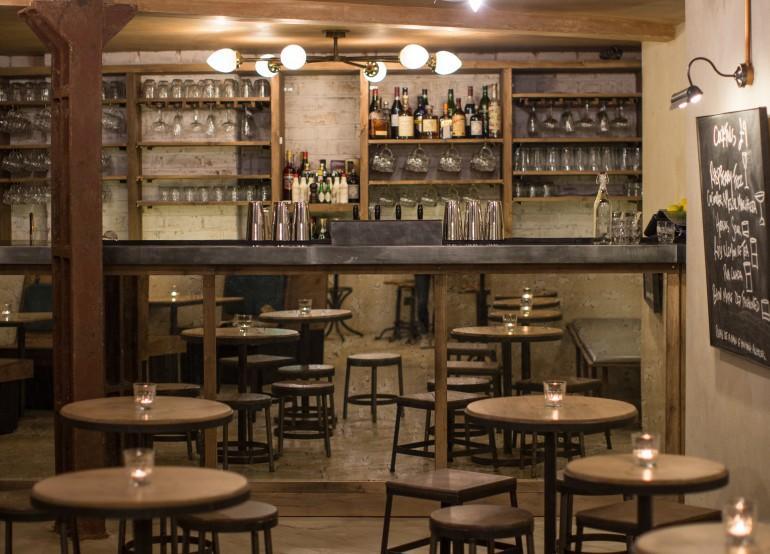 However you also forget how much you’re drinking, if you ask for a glass of wine you aren’t just given a glass, you’re given a bottle which is the equivalent of three normal bottles and then you’re charged for the number of glasses you pour yourself. It’s a real test of self-control.

The staff were charming, the waiting time despite the number of customers was quick and their soundtrack needs to be mentioned, Biggie Small, Dr Dre and Blackstreet – we couldn’t get enough of it.

Would I recommend Homeslice as one of my favourite pizza places in London? Yes. Yes I would.