New? As is the case with many successful restaurants that have opened in recent years, Homeslice began life back in 2011 at street food markets in east London. Fast forward a few years and the humble hand-built wood fired oven has moved on to three sites, the original in Neal’s Yard being the cosiest (and therefore often having the longest queues).

Where? There are currently 3 in central London; Shoreditch, Covent Garden, and Fitzrovia, where we went; 52 Wells Street, Fitzrovia, W1T 3PR, www.homeslicepizza.co.uk

On the Menu: Homeslice is known for its vast 20” pizzas, all the same price and recommended for 2-3 people to share. A concise list of flavours includes the classic margherita as well as more creative flavours like the new autumnal wild venison with kale, onions and dukkah and, the best bit, each base can be split 50/50 so when 20 inches of salami seems a little much, you can break it up. 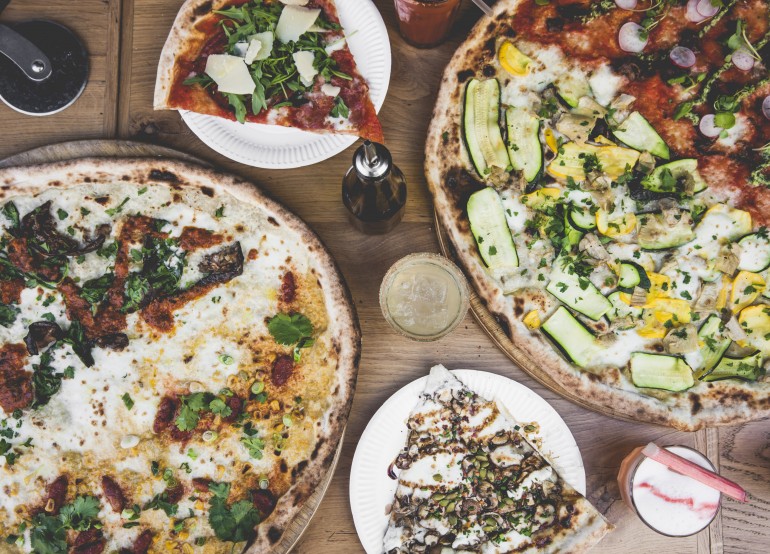 First Impressions: I’m quite possibly the only Londoner who has never been to Homeslice, but arriving with my friend who is its biggest fan, I was quickly shown the ropes – and there’s not much to learn. Two entrances split those taking away from those dining in but once inside, the open kitchen and huge pizza oven (well, the pizzas are pretty big) occupy a large section of the room. The restaurant has a casual feel to it and was occupied by a few arty looking Fitzrovia types, presumably from nearby offices, although it wasn’t nearly as busy as I had anticipated – but it was a Tuesday.

The Look: The space is very ‘urban’; exposed white-washed brick and large blackboard menus make up the dining area and authentic patterned tiles occupy the walls in the kitchen, with wooden booths around the edge solving the seating dilemma; booths are always a winner. A long table down the middle was occupied by a large group of friends, perched on low stools and high seats at the bar hint at how busy it gets; no area is wasted. 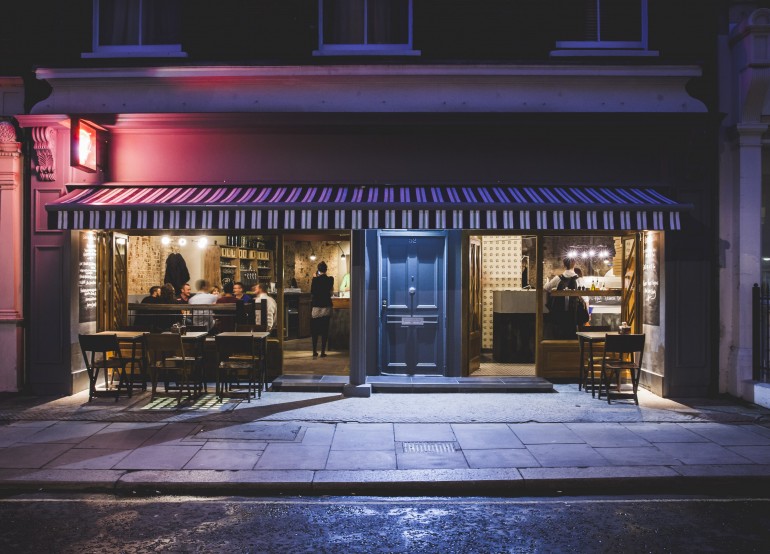 What We Ate: Half and half seems the obvious choice so we went for half mushoom, ricotta, pumpkin seed and chilli and half oxtail, watercress and horseradish and sorrel cream. With a giant pizza comes giant slices so the main question after slicing it up is do you roll it, fold it, slice it or just tackle it head on? We saw versions of everything. Sunflower seeds and ricotta on one half proved a winning combination – the seeds added crunch and the chive gave a herby kick. The toppings were rustic and hearty – instead of tirelessly positioned slices of mushroom, each slice contained decent amounts of everything so you get what you signed up for with every bite. The oxtail was a braver choice, but a good one. Slightly sparser toppings meant the tomato base stood out, dotted with chunks of meat, slices of radish, handfuls of watercress and drizzles of the sorrel and punchy horseradish cream. Forget what you’re eating and every so often the horseradish will remind you. The back of my nose was humming so much at one point I had to turn back to the trusty ricotta to calm me down.

The dough was perfectly chewy and although not sourdough like most of the ‘trendy’ pizza places out there at the moment, it somehow felt light – extra marks to the guy kneading the giant balls and spinning the discs of dough, it can’t be easy.

The only thing I would say is that paper plates seemed slightly odd, as did the tiny napkins – supposedly environmentally friendly, the recycled squares of paper practically dissolved the minute you wiped your hands. After getting through close to ten, surely it would be better to replace them with something a little more functional?

What We Drank: We stuck with individual glasses to avoid temptation (it was only a Tuesday) but the waitress was more than happy to bring us over another when we did in fact decide that two glasses would be better than one. As well as the glass tumblers, wine can also be ordered in 500ml or 1litre carafes – gone are the days of the 1.5l pay-for-what-you-drink bottles. Like the pizza, drinks are kept simple here with a choice of red, white, rose or Frizzante (Prosecco) on tap. The wines are from a small supplier with a focus on minimal environmental impact and maximum taste – the red and white are both biodynamic and organic, and the Tempranillo certainly very drinkable.

Go With: Anyone who loves pizza will love Homeslice – if they’re a Londoner they have probably already been and if they’re not, it will be a London dining experience they probably won’t stop talking about.

Final Word: I’m normally someone who leaves the crusts but here I had every bite – I think that says it all. Oh, and the playlist was amazing; disco, funk and soul classics that had us wishing it wasn’t only Tuesday.

Like this? Try these? Pizza Pilgrims, Pizza East, Joe Public

Homeslice Fitzrovia Review- What We Thought

Homeslice Fitzrovia Review- What We Thought