When I was younger, searching for hearty vegan junk-food that was going to leave me satisfied was hard to come by. If even possible. Fast-forward to 2019, where veganism is at its height and continues to skyrocket each and every day, with new options cropping up around every corner. Yes, I’m talking to you veggie bean burger – move out of the way, your days are well and truly over. An independent company making its own dent in the revolution is Biff’s Jack Shack. They’re on their own mission to create totally filthy yet entirely indulgent vegan junk food.

Armed with one of the world’s most peculiar fruits (and arguably smelliest!) – the jackfruit – Biff’s has totally elevated London’s vegan culture thanks to this little (big) fruit. Although it’s commonly used in South and Southeast Asian cuisines, we’ve seen a rise in its use in vegan cooking thanks to its meat-like texture. That being said, Biff’s Jack Shack’s signature crispy fried jackfruit has redefined the vegan scene even further. 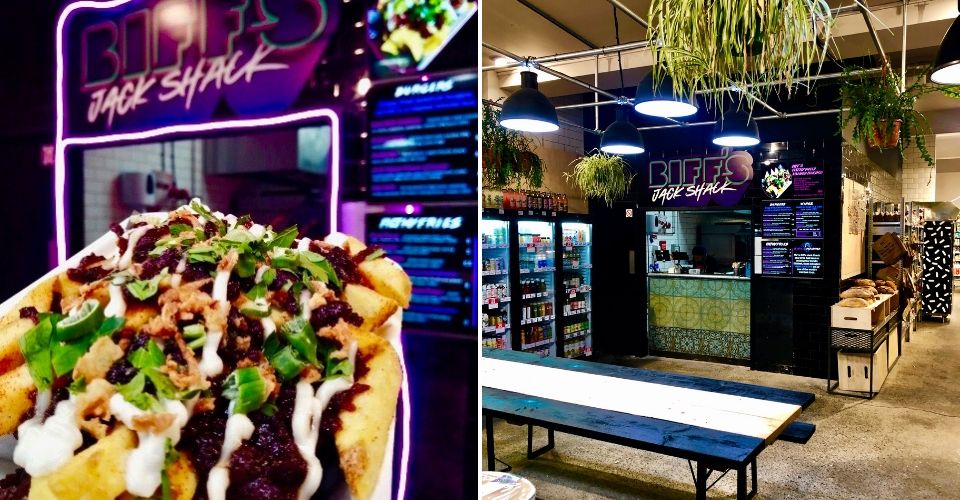 Despite only setting up their first shack in May 2017, co-founders Biff Burrows and Christa Bloom’s journey has gone from strength to strength. And it seems to just keep continuing as they’ve recently opened their third location at East 17 Homerton. When I arrived at the new location in Homerton, I was slightly taken aback having never visited Eat 17 before. The shack is located within the Eat 17 Spar store – yes, it’s literally in a Spar! Before heading over the stand, I wandered around in awe of my surroundings. It’s certainly not just your average convenience store though, working in partnership with Spar and some of the finest local food companies around. It felt like a community hub and a health food store rolled into one. Towards the left you’ll find Biff’s waiting with all its devilish food to offer.

After rocking up slightly befuddled from the nearly hour tube journey in rush hour from the office, we were greeted with warm welcomes and wide smiles by our lovely servers. Despite being a little bewildered and definitely spoilt for choice, my companion and I opted for a share a bunch so we could really revel in all the glorious flavours. I have to say, before trying Biff’s I’ve always been slightly dubious about jackfruit. I’ve steered clear after a questionable experience in a chain restaurant a few months back. That being said, I was eager to give it one last shot and my, oh my, am I glad I did.

First up, we opted for ‘The Samuel Hell Jackson’, partly because of the fillings and partly for the name… But first we need to talk about the burger. Hands down it was one of the best burgers I have ever had the pleasure of eating. The burger itself was so crisp thanks to the good ol’ panko crumb and although it was fried, it certainly wasn’t dripping in grease, winner! When you bite into it, the jackfruit rips apart like you’re biting into actual chicken. Topped with chipotle slaw, maple chipotle 7.5 hot sauce, crunchy jalapeños, American style cheeze and punchy BBQ sauce, all inside a toasted brioche bun. Again, I’m not one to moan but I’m 110% over the brioche craze already. However, this one changed my mind – maybe because it was vegan but it wasn’t overpoweringly sweet and stayed near enough intact through the whole procession! Always an added bonus when a bun can manage the brunt of your bite.

Having never tried poutine before I was eager to try their take on a vegan version. The spiced fries with topped with cheeze curbs, seitan bacon, toasted seeds and lashings of porcini mushroom gravy. At first, it was confusing but as the cheese began to melt into the gravy, it oozed out real comfort food – perfect if you’re craving your mums Sunday roast and the ultimate upgrade for your average cheesy chip!

Last but certainly not least are the wings. Seriously eat your heart out KFC, these guys are onto a winner here. Being greedy, we opted to share one of each between us. Favourites were the burb and the bang. My companion deems himself a bit of a BBQ sauce hater but the burb definitely converted him into a full blown lover. Maybe because it’s infused with bourbon but I’ll take the win. The bang, on the other hand, has a mix of sweet and spicy from chilli and unusually cinnamon. The chilli punch was balanced out by the miso mayo. Be careful upon biting though because you’ll find a sugarcane ‘bone’ inside, creating the real chicken experience.

20K TODAY 🙌⁣ ⁣ Guysss. We’re feeling hashtag blessed rn 🥰 Thank you for all your continued love and support of our journey to make the world a tastier place, one jackfruit at a time.⁣ ⁣ Keep being #veganAF 👊

Our only advice is to bring a pack of wet wipes because you’ll be covered in all the flavours, sauces and goodness.