Oh Berlin, how you’ve stolen the heart of so many. A city once known for turmoil has since become a vibrant cultural artistic hub full of glitz and glamour. Today, you will find cosmopolitan streets filled with hipster cafés, a whole lotta’ vegan eateries and it’s endless nightlife – literally, there are clubs that stay open 24 hours. Trust me. It’s also home to the worlds largest theatre stage, the Friedrichsradt-Palast. Yep, pretty impressive right? Well, to celebrate the theatres 100th anniversary, I jetted off for a whirlwind unforgettable 24 hour adventure to check it all out.

Waking up every morning at 6am for work, you’d think I’d be pretty used to early mornings by now, but when my alarm screeched at 3am, it was a whole other story. And yet, before I knew it, I was high amongst the clouds, coffee in tow.

For those who’ve never graced Berlin’s city streets before, you’ve probably been flooded with history tutors reeling off facts about its Holocaust memorials and the now graffitied Berlin Wall. Both of which are definitely worth visiting for city dwellers but it’s the nightlife awaiting to be unveiled I want to steer your mind towards. No, I’m not suggesting you hit up Berghain or KitKatClub. I’m talking about its elaborate theatre-land, more specifically the Friedrichstadt-Palast (you’ll be glad to know the curfew is before 11pm so you can still have an early night… or meet Disco Stu on the techno dance-floor afterwards, whichever you fancy!). 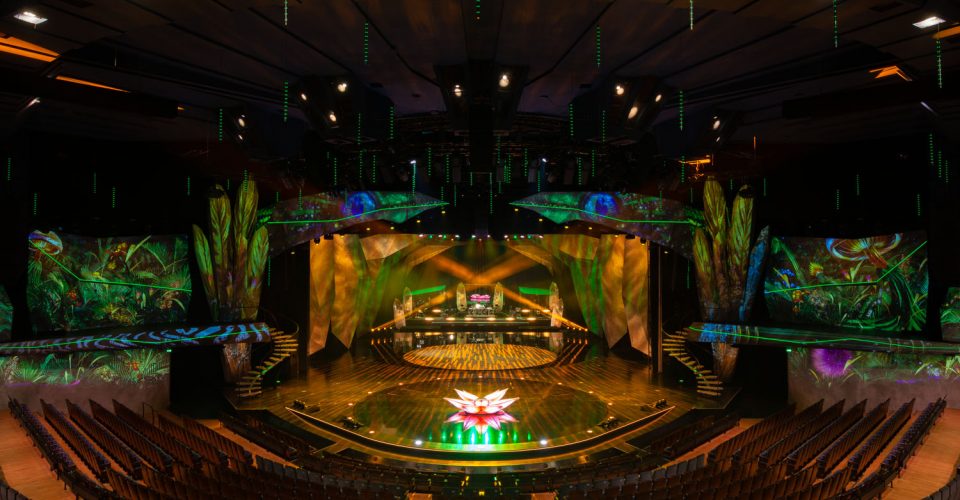 Unless you’re a theatre-head, you probably didn’t know Berlin was home to the worlds biggest theatre stage, Friedrichstadt-Palast, commonly known as the Palast (or the palace to us English). More than 700,000 guests flood through the doors each year, marking itself as the most visited theatre in Berlin. Aside from the epic theatre stage, it’s the eccentric theatre productions which pave the way for its popularity. The General Director and Producer, Dr. Berndt Schmidt, was said to have taken the theatre from an spiralling economic crisis, back to its heyday – the wild, elaborate, roaring 1920s.

I’m going to be honest here and say I only did a little research on the show, VIVID Grand Show, before arriving there. Yes, I’d watched the trailer but it didn’t really give much away (or blow me away). But boy, was I wrong! VIVID Grand Show left me breathless, astonished, shocked, even in hysterics at times – and not for the reasons I expected. This isn’t just some pantomime or knock off musical – it’s a work of art down to every last detail. 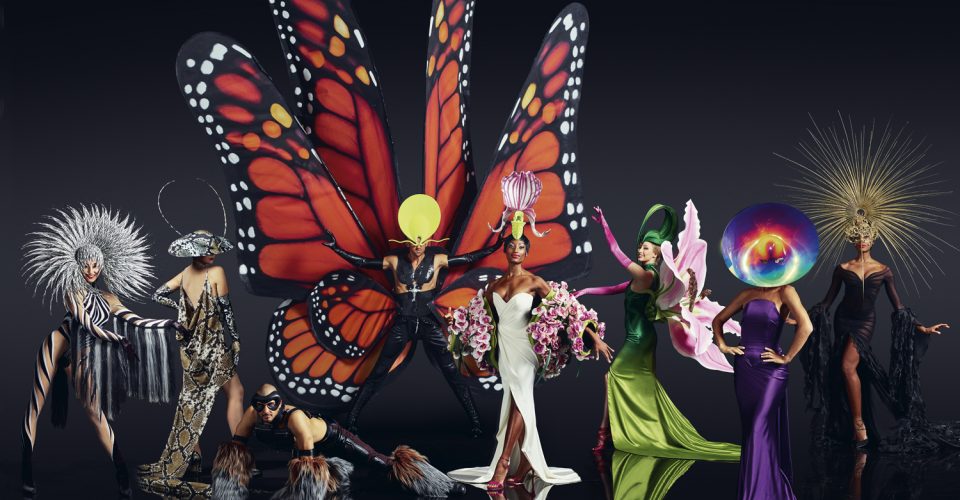 To set the scene, the young protagonist R’eye becomes separated from her father and is transformed into an android – half human, half machine. Now living under external control, her yearning for freedom overpowers her and she sets out in search of her true identity. With her childhood heart still beaming inside of her, she begins seeing the world with new eyes and finds beauty in things we often neglect in everyday life.

VIVID Grand Show is extraordinary and groundbreaking in many ways, one being how it’s the first production of theirs to be helmed by a female director. Krista Monson, known for her work with Cirque de Soleil, carved her own path in the production, drawing on the Cirque formation, modernising it along the way – although I’m sure the £12 million budget helped too. 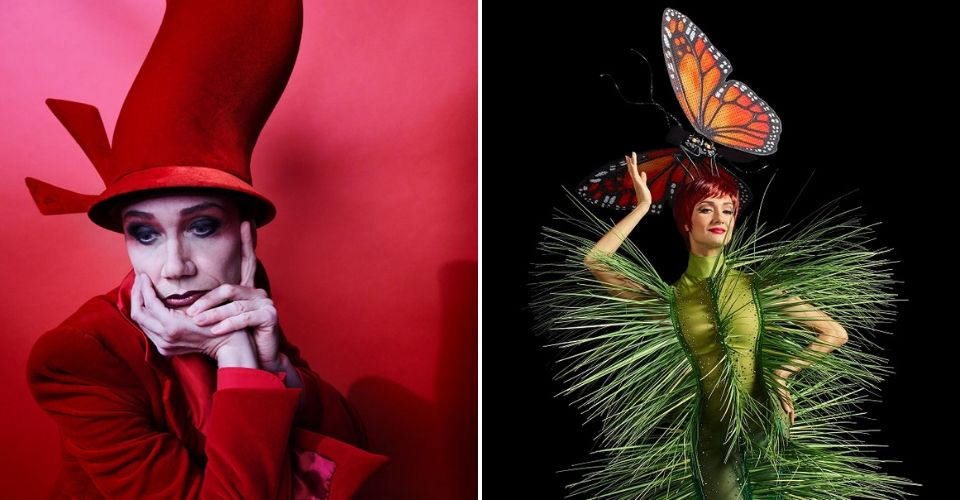 Despite following a fairly normal narrative (minus the android part obvs), each scene itself was beautifully crafted thanks to both the choreography and the costume design. With over 100 performers to cater for, Italian costume designer Stefano Canulli certainly had his hands full but pulled off each costume effortlessly. We were lucky enough to go backstage before the performance to explore the rehearsal spaces and make-up rooms, and it was clear to everyone just how much time and effort had gone into crafting each piece. From the sequinned gowns to the ten foot butterfly outfit. Everything had to be perfect.

Now, we can’t continue without mentioning the extravagant, one of a kind headpieces designed by world famous hat designer, Philip Treacy. His work has graced the domes of pop royalty such as Lady Gaga, Madonna and even the royals themselves; Duchesses Kate, Meghan and old Lizzie herself. You name the hat, it was likely designed by Treacy. He deserves a knighthood (or a knighthat) just for his VIVID Grand Show creations alone. With over 100 dancers and performers, his craft was put to the test and he fulfilled with each delicate piece. They’re bizarre, they’re beautiful and left me yearning for more. Just going to see them all in action is enough to visit the show itself.

All of the performers were trained classically before showcasing their skills at the show, so there’s definitely underlying classic ballet elements lingering in the pipeline, whilst being contrasted with modern dance too. While the story itself was slightly hard to follow, each scene had clearly been crafted into its own with stunning choreography, dance and theatrics. From the wild jungle animals roaring across the stage to the raunchy funhouse (set in maybe the worlds largest sequinned hats!), the taunting android scenes to roaring wheel of steel act which left the audience breathless from the fearless acrobatics. All of the music was conducted live by the on-stage orchestra, and many scenes had them running across the stage, trombones and drums in tow. Each element was choreographed in time with each beat, note and lyric – running effortlessly smooth. 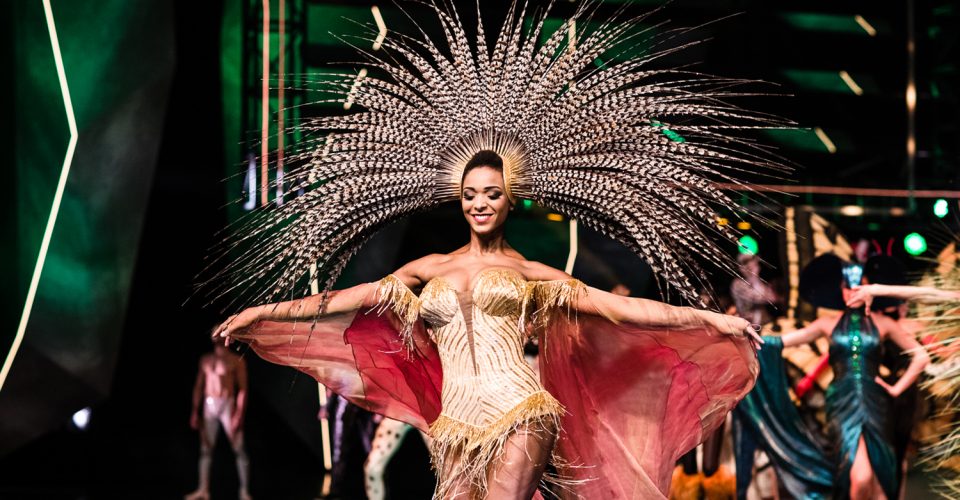 To sum up the performance, the show was bizarrely beautiful. While at times the narrative felt as though it went off topic, each scene was crafted so stunningly it made up for it. If you’re left unsure because of the language barrier, there’s a whole mixture of English, German and Arabic songs throughout, and any speech is said in both German and English, in hope of creating inclusivity. The underlying message of finding your inner identity is a message of so many great novels, films and theatrics, but after all, aren’t we all trying to find ourselves in this confusing world?