Fancy Crab. It calls to mind a nineties dance move – think ‘big fish little fish’ meets cocktail soiree. It could be a pilates position favoured by Hermes-toting ‘soccer moms’. But this time, Fancy Crab is the Marylebone restaurant offering that jewel of the sea, the red king crab.

Fancy Crab has received mixed reviews since it opened. Lesser mortals seem perfectly satisfied, delighted even, while big shot reviewers turn and run like they’re fleeing the zombie apocalypse. I was prepared to be swung either way, so long as I was presented with a significant quantity of said crustacean and a healthy portion of its under the sea pals. I am nothing if not open-minded (and open-mouthed). 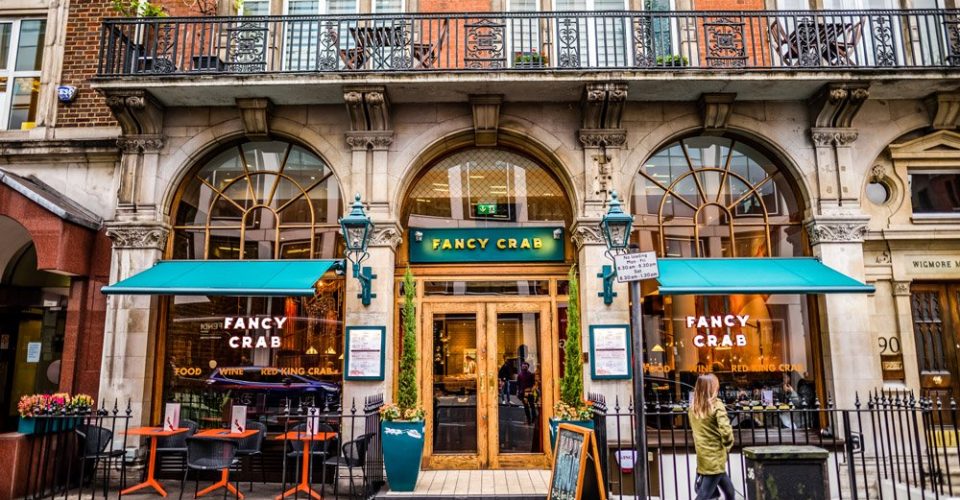 Things got off to a decent start. It’s a cool space – lots of exposed brick, glass and fancy lights. They’ve put real effort into the decor – hanging lamps are designed to look like crab nets, and the eponymous creature is subtly worked into the art on the wall. It certainly looked nice, the place you’d enjoy a good (though clearly expensive) dinner. Wine ain’t cheap here, we soon realised as we opened the food menu. In fact, nothing is cheap here. Nevertheless, we decided to live a little and opted for the ‘Premium Platter’ – a generous stand of mussels, crab claws, clams, oysters, tiger prawns, Atlantic prawns, scallop ceviche, octopus carpaccio and squid ink crackers. Overkill? Maybe, but I really had to get a thorough understanding of the menu, I wouldn’t be doing my job properly if I didn’t. What a hard life!

The platter is a head-turning performance of dry ice and a massive two-foot stand. The whole restaurant turns and stares. It certainly makes for an impressive entrance and bar a few wedges of lemon on the side, there’s no fancy cooking methods and consequently not a huge amount that could go wrong. It tastes fresh, the seafood is of a decent quality – it’s a perfectly serviceable platter of dead stuff from the sea, and I like it all. The ‘house condiments’ are packed with flavour and really make the taste buds dance. The scallop carpaccio was particularly tasty.

We were busy ripping the heads off of fist sized tiger prawns when our second dish, the grilled octopus, arrived.  Compared to the plate, this was way more exciting – a tender, flame grilled tentacle, subtly smoky and smothered in a glossy balsamic glaze (though at £14, it is perhaps worth pointing out that this was a single tentacle!) I wondered absent-mindedly what had happened to the other seven?

Tables around us housed an interesting mix. There was clearly a ‘meet the parents’ scenario going on in one corner, mum and dad tearing the limbs from a crab with excessive gusto. There were a number of shoppers who had wound their way here after a hard day pounding Bond Street, and a mother with a young son who proceeded to devour a 2kg red king crab entirely unaided. Everyone (bar the parents) seemed to be having a thoroughly good time. There was a lot of finger-licking and slurping going on. Table tops resembled scenes from Alien. Fancy Crab wasn’t so fancy that guests weren’t getting stuck in, despite being both monied and mannered, and I quite liked that. So far, not too fishy.

We decided to sample Fancy Crab’s ‘signature dish’ – the Singapore Chilli Crab. This is tricky to do well. When crafted authentically by street hawkers on Far Eastern pavements it has none of the ketchup-laden gravy thickened with egg found in many restaurants. At Fancy Crab, the sauce is thankfully concocted of chopped herbs and spices that feel thoughtful – there’s no slippery sweetness here- with just enough chilli to give it a kick without scorching the tongue. My one observation would be that it misses the must-have companion of mantous, or fried Chinese buns. It could also potentially be hotter, but this was pretty quickly forgotten once we got stuck in ripping out the meat from the cracked crab legs piled into the bowl. It’s a messy business, eating crab. Take it from me, don’t drop it down your dress, or your clothes will recall your dinner for as long as you do.

We discussed our Fancy Crab experience as we meandered back to Oxford Circus, scanning for any supermarkets that may sell Vanish. The restaurant’s definitely an ‘experience’ – if you’ve never had the joy of smashing a crab and feeling victorious as you gaze at a pile of hard-won meat, it’s a good place to cut your teeth. In fact, if you’re a seafood fan it’s pretty hard to go wrong – they do all the basics and then some. And it’s pricey, but for the novelty of crab and in comparison to it’s crustacea competitors, not overly so. It’s also the only restaurant in London where nobody raises an eyebrow if you shout out ‘I’ve got crabs!’