What? The latest from The Ivy Collection’s empire, The Ivy Soho Brasserie is an impressive 200-cover restaurant.

New? Yes, brand spanking new, having only opened at the start of February.

On the Menu: Executive Chef Sean Burbidge has created a British menu, which is nothing if not extensive – you’ve got 14 starters alone to choose from. Expect to find the likes of tuna carpaccio, crispy duck salad, lobster thermidor, steak tartare and The Ivy’s classic shepherd’s pie. For pudding, there is flourless cappuccino cakes and apple tarts, but you know you’ll be going for the chocolate bombe.

First Impressions: It’s big – as you’d expect for a 200-cover restaurant. The terrace was full, with diners wrapped in blankets fighting the February chill and, inside, every table was busy – it might be a cliché to stay it was buzzing, but it was. It had the sort of atmosphere that made you want to sit straight down and order a cocktail, to heck with what you have to do tomorrow.

The Look: The interior is the work of critically-acclaimed Martin Brudnizki Design Studio. It’s divided into a café area, dining bar, restaurant and a private dining room. An onyx bar dominates the room, sit at the bar for cocktails first if you can. Burnt orange leather banquettes and blue velvet chairs fill the space, the floors are marble tiles and the walls are covered in art, everywhere you look there is art. It’s busy, but with low lighting it works.

What We Ate: To start we ordered tempura prawns – fat, juicy prawns with just the right amount of crunch to the batter and freshened with green papaya, cucumber, edamame and a matcha tea sauce.

If you want something light then we recommend the swordfish, which arrived with sweet red peppers, cherry tomatoes, toasted fregola and pesto, lemon and baby basil. Steak tartare with Laphroaig, was good, but if there was Laphroaig in it then you couldn’t tell, the beed was said to be barrel-smoked but didn’t have that smoky, earthiness we were hoping for. Thick cut chips, however were chunky, with the skins left on, no flimsy fries thankfully.

For pudding, we had to go for the chocolate bombe, a chocolate globe filled with milk foam, vanilla ice cream and honeycomb, which is only revealed when they pour hot salted caramel sauce over it. The chocolate shell cracks and melts so satisfyingly in front of you. You can see why it is so popular. 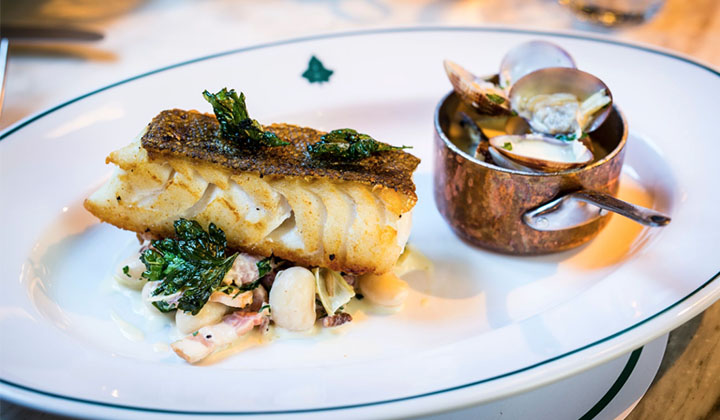 What We Drank: Cocktails are created by Bar Manager Kevin Knee, you’ll find both classic drinks and modern variants of favourites. Of course, being a Thursday, we weren’t messing around and went straight for the strong stuff – a barrel-aged Old Fashioned made with Bulleit bourbon and finished with orange oils and the Social Smokers. Made from rare breed fat washed Bulleit bourbon, The Ivy Soho Brasserie sweet vermouth blend, Angostura bitters and liquid hickory smoke which they pour from a cherry wood smoked carafe for a touch of the theatrics. If you’re looking for something akin to an Old Fashioned then go for this. To finish the evening, we ordered Dick’s Drink, their take on the late legendary Soho bartender, Dick Bradsell’s creation, the Espresso Martini. Made, using vanilla vodka, it’s much sweeter than usual – if you’re too full for pudding then go straight to these.

Go With: Take a date or a group of friends for a raucous birthday.

Final Word: They Ivy Collection is still growing, next month sees the opening of The Ivy Café, Richmond.

Check Out All More Reviews Here