What? The work of sister and brother, Harry and Leah Lobek, London Shell Co is a permanent floating restaurant on the Regent’s Canal which specialises in seafood.

New? Yes, it opened at the end of last year.

Where?  The boat is moored at Sheldon Square, Paddington – if you visit in the evening then you’ll cruise up to Camden. wwww.londonshellco.com 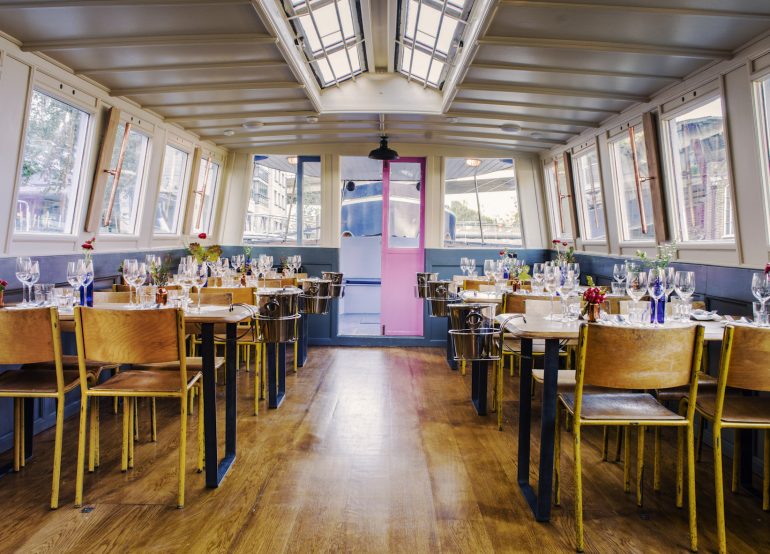 On the Menu: The menu is a celebration of seasonal produce and Harry and Leah’s love of seafood. On the lunch menu, you’ll find the likes of charred gem lettuce with potted brown shrimps and butter poached skate wing with Anya potatoes and greens; whilst in the evening they’ll be serving dishes including cod fillet with braised haricot bean stew and paprika sausage.

First Impressions: If there is one thing that the London Shell Co is not, it’s pretentious. As soon as we stepped inside it was like we were all part of a little club, that for two hours was going to forget about the outside world and just eat great food. Harry was there telling anecdotes, talking guests through the wines and dishes and everyone just seemed friendlier, perhaps it was because given the space and being on a boat everyone had to get along (there is nowhere to go if you do have an argument), or perhaps it was the novelty of being on a boat that had everyone rather excited. Either way, the atmosphere was friendly and cosy.

The Look: With a cheery blue exterior, the Prince Regent stands out against the grey canal and other long boats. Inside it’s light, bright and modest, with polished wooden floors, blue walls, a splash of pink on the door and wooden tables and chairs. Tables are rather close, you won’t be able to lean back at the end – but despite it being on a boat, it feels rather roomy. Flickering candles and flowers finish the look, it’s charming in a homely, simple way. At one end is a tiny bar and a little kitchen, the fact they managed to cook everything so swiftly means that you’ll never be able to use the ‘my kitchen is too small for me to cook in’ excuse again. At the other end is the bow, head out there for your Insta #ImOnABoat photos.

Go With: If they don’t have a fear or water/boats and eat seafood then we can’t think of anyone we wouldn’t want to take.

Final Word: We loved London Shell Co. it’s intimate, charming, with the feel of a supper club and the food is wonderful – we highly recommend it.

Like This? Try These: Tamesis Dock, Wright Brothers, The Manor