Alice in Wonderland is one of the most well-known tales and while other venues have tried their hand at creating a themed afternoon tea, nowhere else quite has the quirk factor that the Sanderson London does. As soon as I walk through the door I am greeted by a hot red lips sofa and I wonder how my flatmate would feel if I inconspicuously added it to our living room. The foyer smells like a Jo Malone candle and although none of the décor has any kind of consistency, it still has an air of glamour of being high-end. We checked in briefly at the bar where the iconic bar stools are lined, each emblazoned with an individual eye on the back, before making our way to the courtyard. 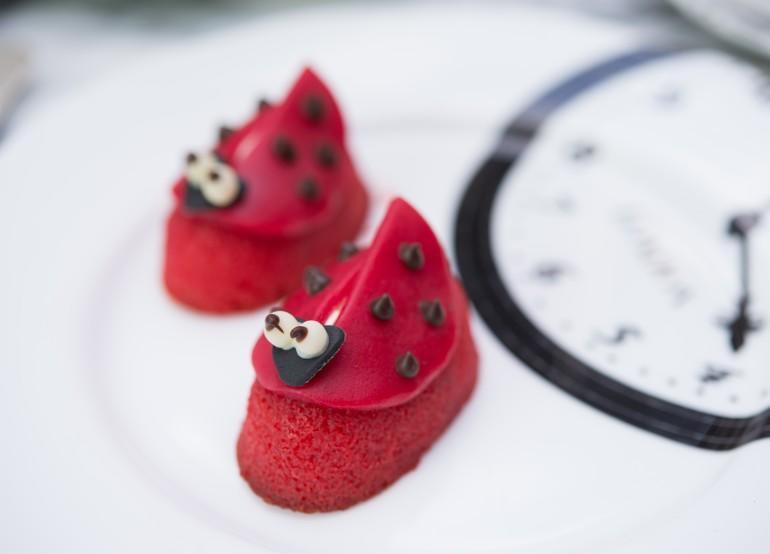 The courtyard is surrounded by the 4 walls of the hotel preventing any howling winds but vast cotton umbrellas with heat lamps make certain that no one gets the chills anyway even in November. Already set out for us on the table is a selection of teas in vials with a label around them describing their contents which reminded me of the ‘drink me’ bottles that Alice takes to make her shrink. The teas are named after various characters so I went for Alice (China Black Tea infused with hints of blackcurrant, vanilla, caramel, citrus, bergamot, blue cornflowers and blue mallow flowers) – now I’m no tea drinker but after tentatively sniffing all the bottles’ contents I decided that Alice was the safest bet and it turned out to be delicious with a slightly cake-like flavour! 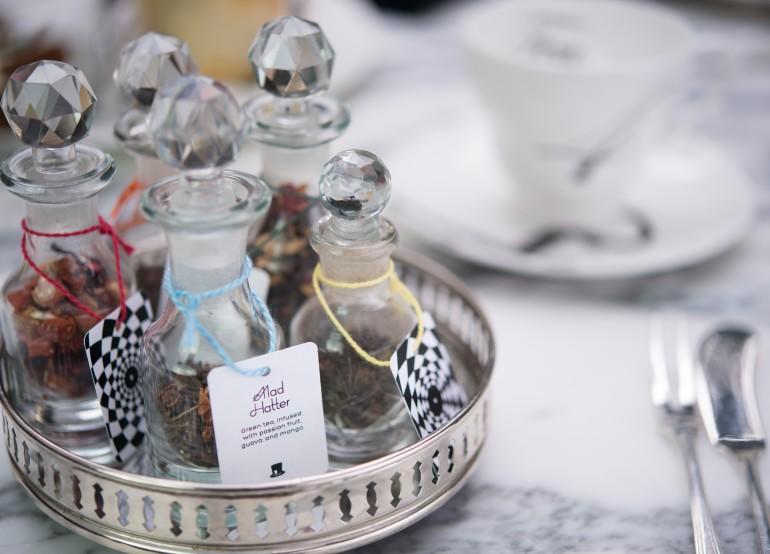 Swiftly after, the savouries were brought out with items like a cucumber and cream cheese sandwich on fresh lime bread (which managed to keep its moisture where most afternoon tea breads fail), a Cornish crab and herb éclair and a Scottish smoked salmon, quail egg and caviar scotch egg. Vegetarians are not forgotten with a sun dried tomato paste in the éclair and a savoury cone filled with avocado mousse. Attention to detail has not been lost anywhere along the line as even the crockery is in theme with melted looking clocks and numbers printed on them, the teapot sports the Queen of Hearts’ face with a paper crowned on top. At this point we have been given the golden news that everything is unlimited and if we want more of anything, we have but to ask. 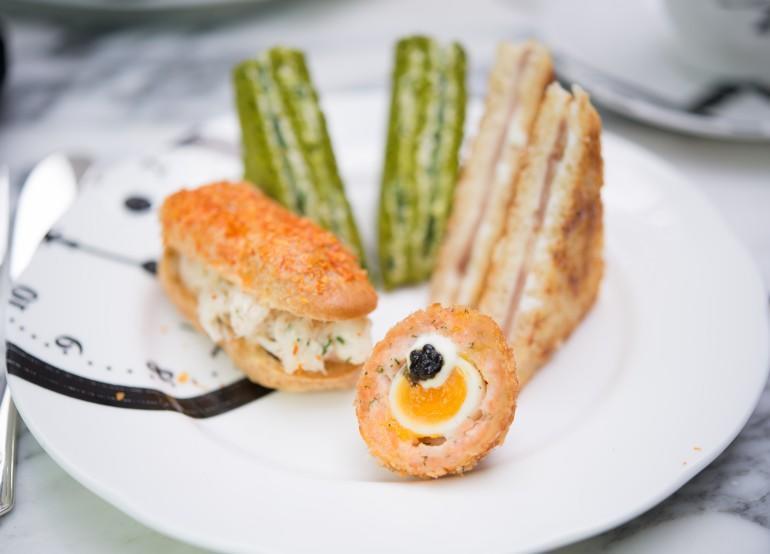 For the sweet section an enviable Smörgåsbord of treats was delivered to us on a cake stand topped with a teacup featuring (real) grass to hide the carrot meringues. On the level underneath were wonderful handcrafted truffles styled to look like caterpillars that lay in between (strawberry flavoured) magic marshmallow mushrooms. Down a level again and you get the busiest plate with red velvet ladybirds filled with a small blob of jam and cream, the White Rabbit’s pocket watch macaroon topped with a coffee bean to look like the stopper, mini banana bread-and-butterly cakes and The Queen of Hearts Oreo cookie soldiers filled with strawberry ganache. The final level hosted the vanilla flavoured scones with classic condiments and Alice’s drink me potion which was a small bottle filled with layers of drinkable cream and jelly with a straw to suck out the goodness. 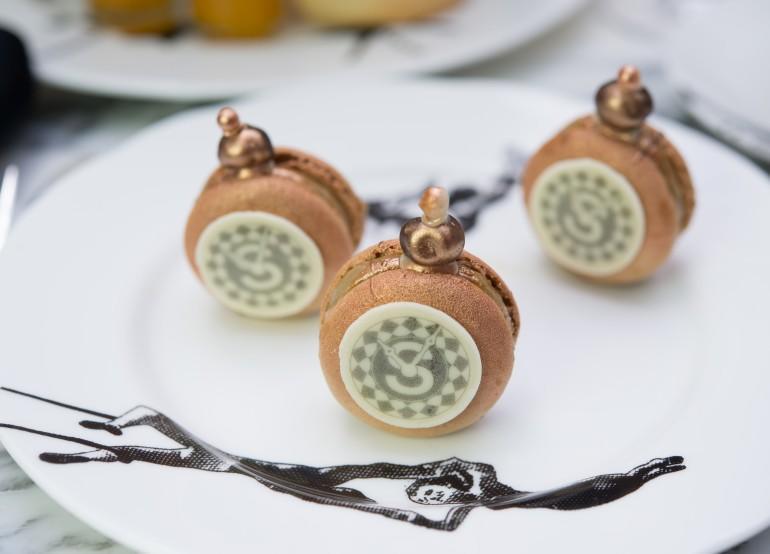 All the sweets were nice enough with my favourite being the chocolate caterpillars as they were so creamy and indulgent, closely followed by the red velvet ladybirds although a more generous filling of cream would have been even better. Least favourite were the mini banana bread-and-butterly cakes as the flavour was too mild or the scones which were nice but I prefer the non-flavoured ones over the vanilla. The afternoon tea like any good tea comes with the option to add a glass of Champagne as well as special cocktails at extra cost to accompany, named chapters 1-4 including a mocktail. The best was Chapter 1 – Down the Rabbit Hole with vanilla liqueur, raspberry liqueur, gomme syrup, cranberry juice and chocolate bitter finished with double cream! 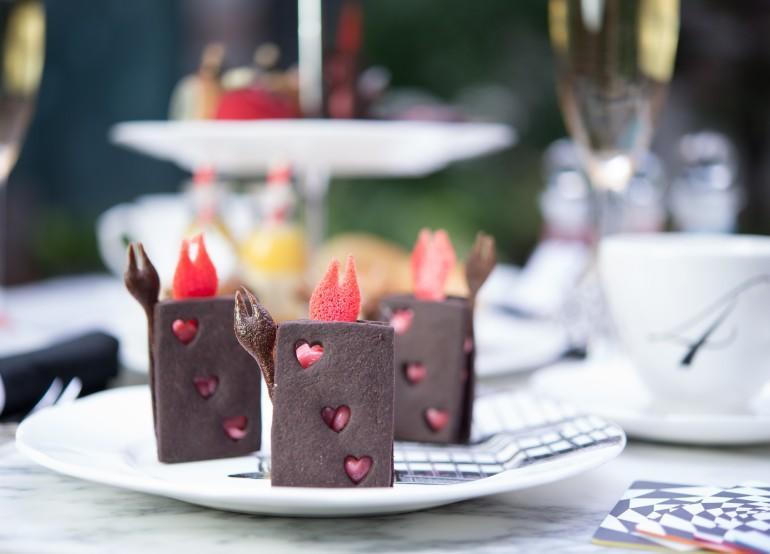 The tea party itself was an afternoon delight which sent me down nostalgia lane and dropped me into one of my favourite films. Although given the option of unlimited, it was actually a slight struggle to get through the first serving provided and I felt stuffed by the time I left. The spread had such charm and tasted delicious while the staff were friendly and helpful throughout, I cannot recommend enough.