New? Part of the Gordon Ramsay empire, maze turns 10 this year but has recently added Sunday Sushi Sessions to its offerings to entice customers in and away from the standard Sunday brunch.

First Impressions: In a prime position on Grosvenor Square, the grand staired entrance lets you know this isn’t your standard sushi joint. Maze sits round to the left whilst, to the right, Maze Grill serves up a mean steak – Gordon is his own competition.

On the Menu: European dining with ‘an Asian flourish’ is how maze describes itself. Sushi makes up a substantial selection of the menu and the Sunday Sushi Menu is what we were reviewing – bottomless bubbles and sushi from 12pm-4pm every Sunday. 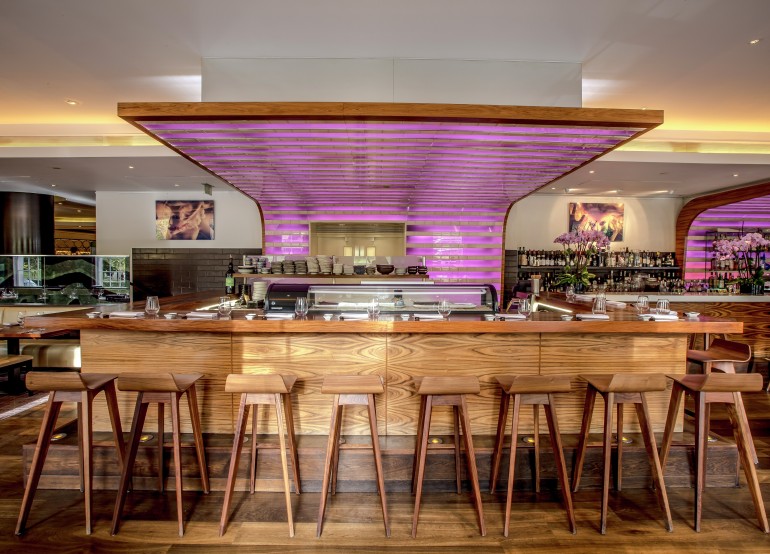 The Look: Splashes of hot pink made the space feel quite girly – a lit (and very well stocked) bar with fuchsia velvet armchairs welcoming for a pre-meal cocktail whilst high wooden stools up against the sushi bar make for the best seats in the house, enabling you to watch the chefs in action. Some of the chairs did look a little tired – one was missing a wheel, several had quite worn fabric and a couple of the low mahogany tables had scuff marks on the surface but an upcoming refurbishment in the Autumn means the restaurant has clocked these too. 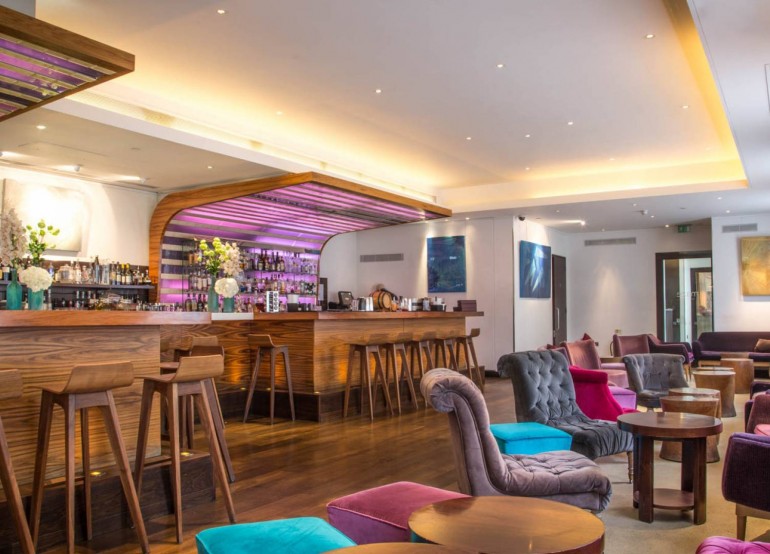 What We Ate: Sushi and lots of it. But before the sushi we had miso soup, prepared from a special vat with tofu, sesame seeds and plenty of spring onion. A rich flavour, almost creamy, it was an authentic start to the meal if a little salty for my taste buds. The sushi that followed was gorgeously presented on a turquoise sharing platter, dotted with edible flowers. Five types of sushi and two of each made sharing easy although I loved the salmon nigiri so much I traded my second California roll for my guest’s salmon. Sitting at the counter we could chat to the sushi chef who told us they use farmed Scottish salmon and a lot of it.

The California roll, tuna tartare roll and salmon tartare roll were generously garnished and my guest loved the California rolls with their crispy topping so much he would have ordered more had we not been so full. At this point you can order more sushi (even another whole platter if you really want) but we moved on to pudding – bear in mind this isn’t included in the Sushi Sunday deal. A former Heston Blumenthal chef heads up the sweet section of the kitchen and looking at the creative, Asian-inspired selection you can tell. Passion fruit pavlova came highly recommended and on a bed of tart yuzu to offset the sweet meringue. My hazelnut chocolate parfait was a work of art with chocolate crumbs, a chocolate stick and the most refreshing and minty mint ice cream I’ve ever tasted. 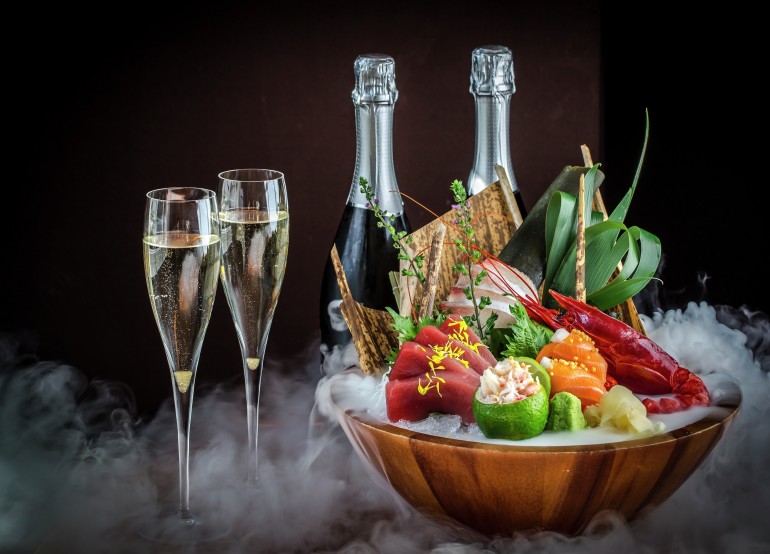 What We Drank: A refreshing Grey Goose Le Fizz and mixologist-recommended Mexican Blossom (tequila, coriander, elderflower liqueur and homemade passion fruit puree) for my guest meant we could ‘test out’ the bar area before climbing up onto our stools at the sushi bar. Prosecco poured from magnums flowed throughout the meal and we were lucky enough to try a glass of Gordon’s house Champagne, Ayala Brut Majeur.

Go With: A sushi-loving date. Wait till the refurb is complete if you really want to impress (late Autumn).

Final Word: Despite being the only people sat at the sushi bar, the restaurant itself was deceptively full. It meant we could chat freely to the sushi chef (greatly encouraged in Japanese tradition) and be completely mesmerised by his knife skills. Service was attentive but not intrusive and our Prosecco was kept topped up to a healthy level. I’ll definitely return post-makeover.

You may also like: MOMMI, Aqua Kyoto and Sexy Fish.

No spam, just a chance to win

You've successfully entered the competition!
Click to hide this message
6 Secret Underground Bars You Never Knew Existed No spam, just great bar inspiration
Thanks! Your submission was successful!
By entering you are accepting The Handbook's terms & conditions and allowing The Handbook to contact you. I'm okay without this in my life