What? The Omorovicza Midnight Menu is a new series of treatments at The Spa at Four Seasons Hotel London at Park Lane which makes use of the new Omorovicza Midnight Radiance Mask and is designed to help prepare the skin and body for a natural restorative sleep. Which, as a Londoner who is guilty of too much coffee and aimlessly Instagram-scrolling my way to insomnia is much needed. If you haven’t heard of Omorovicza, they’re a Hungarian beauty company that make the most of the curative properties of the Hungarian thermal waters.

New? Yes, the treatments launched last month with a pop-up but after its success it is now a permanent fixture at the spa.

Where? Panoramic views and rooftops aren’t just for bars, the Four Seasons spa is on the 10th floor giving it wonderful views out across Hyde Park, so you can sit and gain a bit of reflection on life before you’re pampered. Four Seasons Hotel London at Park Lane, Hamilton Place, Park Lane Mayfair, W1J 7DR, www.fourseasons.com 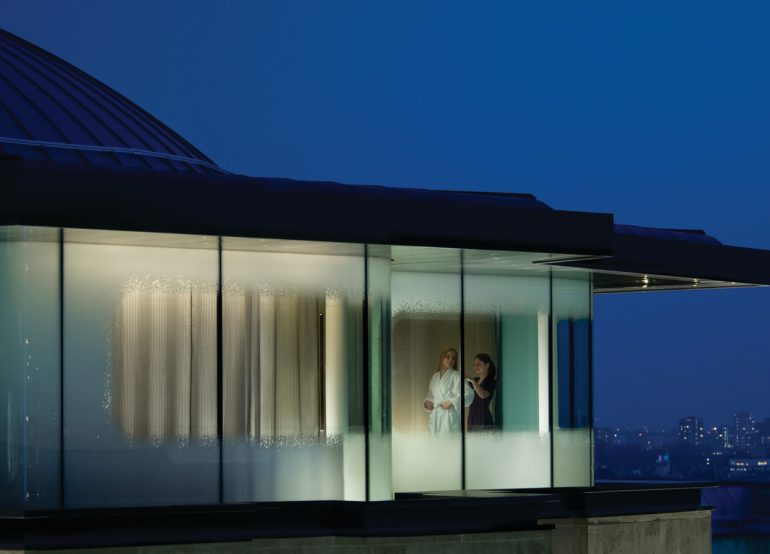 On the Menu: The experience is made up of four parts, a back and shoulder massage, a facial and then a choice of two enhancers from a list of five. From the facials, there are five to choose from including The Revitaliser which improves your skin fitness using blue diamond peptides; The Hydrator which restores your moisture level and The Brightener which uses a gentle lactic acid copper peel to give you the glow. After the facial, you can go for an eye cooler, neck lift, scalp retreat, foot relaxer or face soother. It all adds up to a very relaxing hour.

The Look: Besides the treatments the draw of The Spa is its location, the rooftop sanctuary has floor to ceiling windows in each one of its nine treatment rooms, allowing you to soak in the views and make the most of the natural light – you can have them darkened during treatments if you wish. The sauna too lets you look out at London, it gives you that surreal, ‘I’ve just had a massage in a rooftop spa and now I’m looking out over the vast city’s twinkling lights’ moment…or maybe that was just me. The relaxation room in comparison has no natural light, in dark, earthy colours there are fires to sit by or if you want privacy then the individual pods let you rest and regather your thoughts.

What We Had: Having had a strenuous weekend of rowing fuelled by carbs, I felt like a needed a detox, so after a ten- minute back massage I chose The Detoxifier facial. It began with a thermal cleansing balm and cleansing milk to remove make up and the inevitable layer of grime and pollution we pick up whilst pounding the London streets. A deep cleansing mask was then applied which gave a warming tingling sensation, whilst that did its magic, my therapist started on my foot treatment. Working to relieve the tension a thick, nourishing body cream was massaged into each foot before they were spritzed with a refreshing mist. It was then onto the scalp retreat, warm oils were first used to condition my hair before moor mud was rubbed in to exfoliate my scalp and release stress from my head to my shoulders.

It was then back to facial, after hot towels were used to remove the mask, Instant Perfection Serum, Rejuvenating Night Cream, Miracle Facial Oil and an Elemental Emulsion were all used – it sounds like a lot of products, but the result wasn’t clogging or heavy on my skin. The facial finishes with the Midnight Radiance Mask – a brightening overnight mask, made with Sand Lily and salicylic acid which instantly melts into your skin. The only downside, after the scalp retreat you have to wash your hair and so I feel like I probably lost some of its benefits this way

Go With: No one, this is one for you. The treatments only take place 4pm – 9pm to coincide with the body’s Circadian Rhythm, so set your alarm for the morning then turn off your phone and let yourself be looked after for an evening away from the stress of everyday life.

Final Word: Did I sleep better that night? I did in fact. I left feeling a little lighter on my feet, more relaxed and wrapped up in a warm cocoon of products. My face did indeed feel clearer, it had glow to it, which I shamelessly made use of for a selfie. By the morning it had gone but as with all treatments for a lasting effect you’d need to get them regularly.

Like This? Try These: Mindful Sleep – ESPA Life at Corinthia   Advanced Facials with SkinCeuticals – Cowshed at Shoreditch House

Win £400 To Spend At LuisaViaRoma