What: Patisserie Party
Where: Le Meridien, Piccadilly
Why you should go there: If you want to gorge yourself silly on cake
Favourite thing we ate: Red velvet cake

Imagine a place where you could escape to on a Sunday afternoon and feast on unlimited cake for three hours, with a table that just kept filling up with cakes no matter how many you ate? It’s the thing our cake dreams are made of. Well there is such a place, Le Meridien’s Patisserie Party held every Sunday between 3 and 6pm in The Oak Room Lounge, a beautiful French Renaissance style room – it’s pink, it’s gold, there are chandeliers and a table absolutely drowning in cake.

We escaped Regent Street and headed there this weekend to see what it was all about. Things start with a glass of Champagne, naturally and a pot of tea – we were asked what sort of tea we would like, but there was no tea list, it’s rather like when you use to go your friend’s house and they would say what do you want and then you would say apple juice and then they didn’t have it– so a small point, they need a tea menu.

Service was good, perhaps almost too attentive, we were constantly asked if we wanted more of everything, they almost seemed too eager trying to press more sandwiches and scones on us despite our protests. 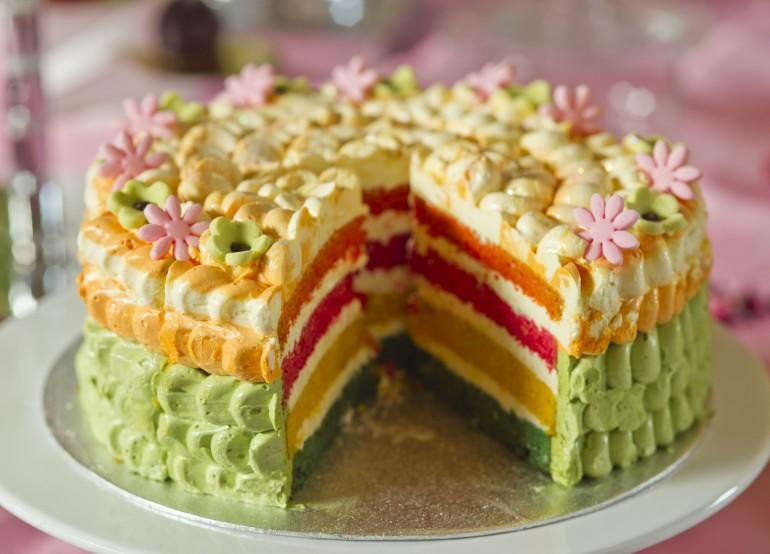 After sandwiches and scones – which were wonderfully light, the real magic happened and we were allowed access to the cake table.  Unlike normal afternoon tea which sees miniature cakes being served on a tray these bad boys were full size. There were macaroons, cupcakes topped 3 inches high with icing, rainbow cakes, pots of panna cotta, carrot cakes, cake pops, Chantilly sponges and it just kept coming and coming, it’s lavish and it’s a real sugar overload.

As you can imagine the room was predominantly filled with girls, and two dutiful boyfriends, so it’s the ideal way to spend a hen party, birthday or baby shower as some were doing. Just maybe go after an intense workout you’ll definitely need to work up an appetite – don’t try it the other way round as we did. No one needs to be running 6 miles with a stomach full of cake.