Have you ever made the mistake of visiting somewhere you normal frequent for drinks at night, during the day? You’re suddenly very aware of the smell, the slightly sticky floor and there is no way you’d used those loos when you’re sober.

Luckily none of that happened when we decided to head to Radio Rooftop Bar one Saturday morning. Normally the place we’d choose to go to for drinks after work, soaking up the alcohol and London skyline in equal measures, to a  soundtrack of Ibiza beats.  They’ve recently launch their new brunch menu and finding ourselves in need of something to start the weekend, we rose to the rooftop of the ME hotel and sat down to bask in the early morning sun.

Start things off with a sweet ice coffee or elderflower spritz, because if you’re feeling fragile or going out later the remedy for both is of course alcohol. At £12 it’s not going to be the cheapest coffee you’ve had but 1) it’s actually a cocktail and 2)  when do you normally drink coffee looking down into Somerset House and out across London? 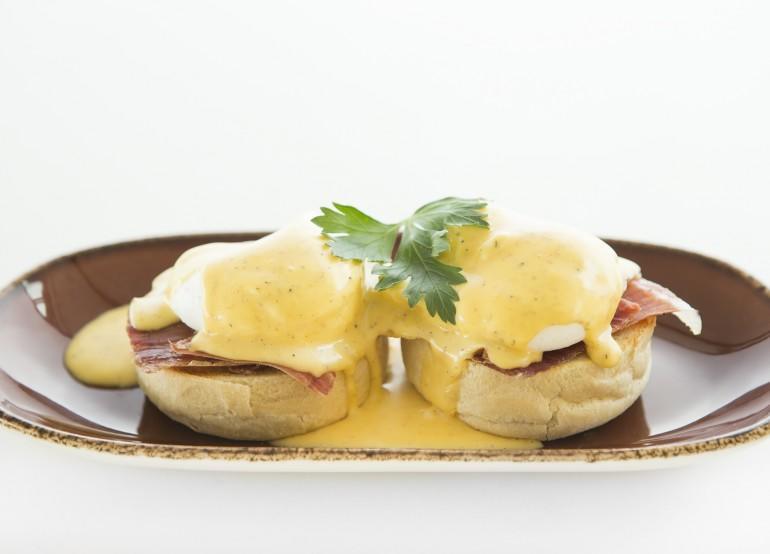 Starters include roast peach on goats cheese, smoked salmon and quail’s scotch eggs. You’ll want to order all three between two, or if you’re particularly hungry one of each, since they’re only bite sized mouthfuls each.

Huevos Benedict, whilst slightly on the small side, gave a Spanish twist to a brunch classic. A pulled pork burger was everything you could hope for when hungover, mountains of pork, a good dollop of spicy sauce, salty gherkins and just the right amount of grease to aid the headache. The roll was rather soggy and fell apart in my hands though, so prepare yourself to get messy and the accompanying sweet potato fries were undercooked. We forgave them because we were caught up in the view, but otherwise, I would have  been disappointed with the hard chips.

We finished with a helping of chilled vanilla rice which was like a cold rice pudding with chunks of fruit, a surprisingly generous portion it finished us off, well, not before a plate of sugary doughnuts which we dipped in hot chocolate sauce.

The service was impeccable throughout, we recommend heading to Radio Rooftop Bar when you’ve got a friend from outside of London visiting, they’ll think London really is this glamourous and you can show off your landmark pointing out skills.

We didn’t even make it to the DIY Bloody Mary station – I guess that just means we have to go back?

No spam, just great view-spiration into your inbox

You've successfully registered for our newsletter!
Click to hide this message
5 Igloos You Need To Know About This Winter No spam, just great London inspiration into your inbox every day
Thanks! Your submission was successful!
By entering you are accepting The Handbook's terms & conditions and allowing The Handbook to contact you. I'm okay without this in my life