The problem with such a talked-about restaurant and a very successful launch party is that, once the celebrities fizzle out, a restaurant has to live up to the hype. We’ve heard mixed things about the food at Restaurant Ours so headed along to South Kensington to check it out.

New? Restaurant Ours opened with a bang (and the flash of paparazzi bulbs) with a glitzy launch party back in April. Welcoming everyone from Paris Hilton to Daisy Lowe with Rudimental DJing, the chatter surrounding Ours has barely slowed down. Since the April opening there has been no end to the high profile faces making an appearance; Pippa Middleton, Kourtney Kardashian and Naomi Campbell have all disappeared down the illuminated catwalk, emerging full-tummied a couple of hours later. 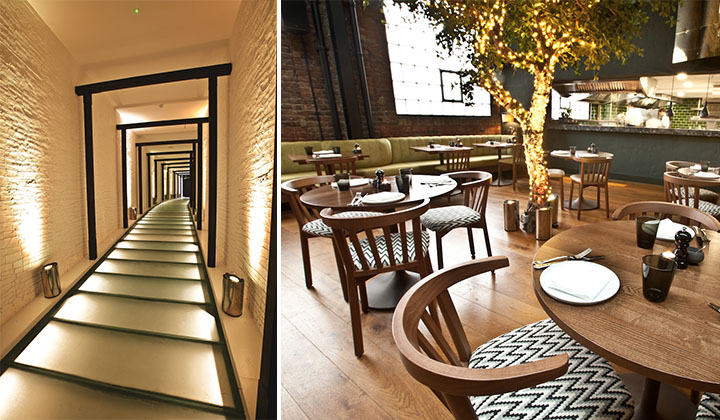 On the Menu: The second venture for renowned chef Tom Sellers (his other, Restaurant Story earned a Michelin star in its first year), Ours promises to be ‘simple yet stand-out, radical yet refined’ modern European cuisine and whilst we’ve heard mixed things about the dinner menu (“everything was drowned in balsamic”) we were trying out the new Sunday lunch menu, known as Ourday. The three course menu includes a few of the dinner time options including the scallop gremolata starter, John Dory main and honey glazed carrots on the side but really the roasts are what Ourday is all about.

First Impressions: There’s no denying Restaurant Ours has the wow factor and having seen so many photos it’s good to finally see that Norman Foster-designed catwalk and fairy lit trees in person. Visiting in broad daylight felt slightly odd – as if you were entering a nightclub during the day – but inside, the vast space was occupied by low-key chatter, a couple of birthday groups and a duo on high stools playing live music. It was much quieter than we’d anticipated, especially given the trouble you’d have trying to get a table in the evening but maybe word hasn’t spread about the Sunday offerings just yet.

The Look: The vast split level space is made up of a dining area on the ground floor and slightly raised area at the back, next to the open kitchen, as well as a more private mezzanine overlooking everything. Huge industrial warehouse-style windows flood the room with light, whilst dark inky walls covered with live greenery and a central marble bar make it seriously dramatic. There’s a lot going on but it all works together and avoids that slightly monotonous table set up of when all the seats are the same, set out in neat rows. We settled in to the pistachio coloured banquette up by the kitchen; a good spot to watch over the room whilst having privacy and since the place wasn’t particularly busy they were filling it from the top down so we weren’t too far from the other diners. Highlights of the design for us were the gold pineapple lamps and the ladies loo, which with its baby pink mosaic tiles, palm print wallpaper and hammered brass sinks is impossible not to photograph. 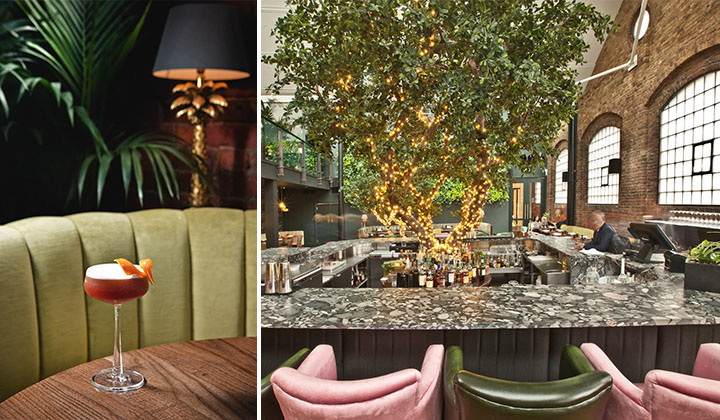 What We Ate: Roast chicken and roast lamb. But let’s not get ahead of ourselves; we started with the scallop gremolata and the ham hock terrine. Both solid (and really visual) choices, the terrine was made up of big chunks of ham with piccalilli and flower petals whilst the single scallop came in its shell sitting in a pool of garlicky butter. It was delicious – as you’d expect when one is all you get.

On to the main event and as they food was brought over I was glad the starters had been the size that they were. Two thick slices of a leg of lamb and a Yorkshire pudding sat on my plate whilst two huge legs of chicken and a Yorkshire sat on the other. A selection of sides to share came in individual dishes, of which the chunky honey glazed carrots and satisfyingly crisp roast potatoes were firm favourites but the cheesy cauliflower and fairly crunchy green beans were welcome additions. A vital part of any roast, the gravy came in a little jug, poured instantly by the waitress. I don’t mind this but my guest saw what was about to happen and said she’d prefer to just pour her own. Some people like it in the Yorkshires, some on the meat so I think it would have been better to just put the jugs down next to us. Equally, the option of accompanying sauces would have been nice – mint jelly would have been a great addition. Whilst the roasts were what you’d expect – classic and hearty – some elements were better than others. My lamb was nice and pink in the middle and cut thickly (how I like it) but it certainly wasn’t hot. Equally, you can’t argue that the chicken wasn’t generous (it was more like two quarters of chicken than just two legs) but the skin could definitely have been crisper. 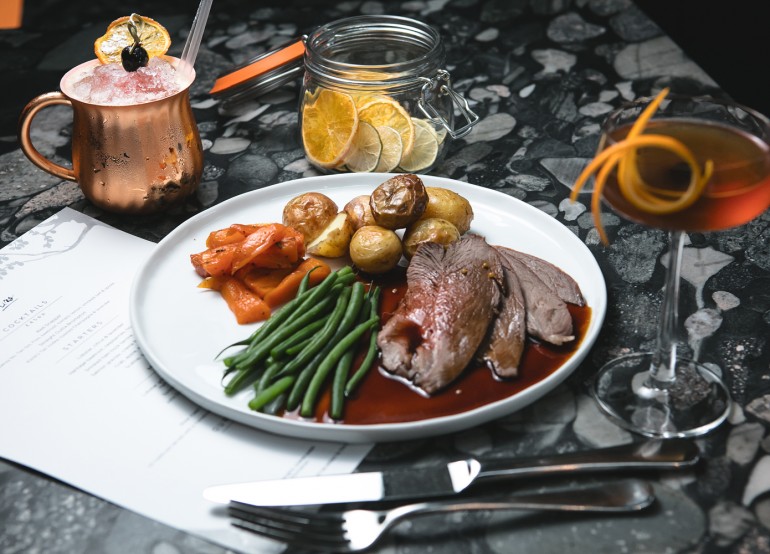 A retro dessert trolley was wheeled over the right amount of time after the plates were cleared and, because it was sat near us for the duration of the meal, I had already decided what I wanted. A large shallow bowl of creme brûlée passed the vital ‘crack’ test but unfortunately was a little runny in the middle. The salted caramel cheesecake was good as cheesecakes go but not if you wanted it to really taste of salted caramel. Other options included an almond frangipane tart, an appealing looking strawberry trifle and a classic lemon tart. Affogato is on the menu (and is my go-to) but the menus were whisked away after ordering starters and mains so I’d forgotten it was an option. It’s worth pointing out here that the staff were polished and professional, uniformly dressed in suits and navy dresses with red bows at the back – if a little air hostessy – and a swipe of red lipstick but wouldn’t engage in conversation. Perhaps discretion is key here but we did think a slightly more personable interaction would have been a good thing.

What We Drank: The Ourday menu comes with a cocktail so we started with the ‘Straight Outta Brompton’; Konik’s Tail vodka and toasted Champagne garnished with a sprig of lavender. Not the usual start to a roast but it was an unusual and well-balanced drink although the bright pink decorative drizzle on top was unnecessary. The other cocktail is slightly more conventional – their take on the Bloody Mary, aka ‘The Red Snapper’, it’s made with Tanqueray No.Ten for a bit of a twist.

Go With: Restaurant Ours is definitely one for a special occasion, and for those with deep pockets. Remember to dress up, you never know if you might be photographed…

Final Word: Whether or not they were aiming for it, Restaurant Ours is undeniably a place to be seen (just posting a picture of the palm print wallpaper and pink tiles in the ladies will guarantee you a hefty number of Instagram likes) and the food has the tough job of living up to the hype. Does it deliver? Kind of. My advice? Do your research and plan what you want to eat before you get there. There’s nothing worse than being let down by a meal you were looking forward to. That said, you can’t go too far wrong with a roast and had we been presented with the exact same plates of food in the pub over the road (which by the way is really good) we would have been pleased. There’s just something about high expectations and high price points that can hinder a venue but you get the impression Restaurant Ours isn’t all about the food – there’s no denying that you go for much more than that.

Like this? Try these: Chiltern Firehouse, Restaurant Story, The Ivy