What? Cub is the highly anticipated restaurant from Ryan Chetiyawardana (aka Mr Lyan), his team and Doug McMaster of Brighton’s pioneering zero-waste restaurant Silo. Here, as with Silo, the focus is on sustainability both in the dishes and in the interiors. Its other quest is to blur the boundaries between food and drink. Whilst blurring food and drink might sound (dare I say it) pretentious, in reality what it means is that drinks aren’t just there to accompany or elevate dishes, they are served in their own right, sometimes without food.

Where? Taking over the space which use to belong to White Lyan (Mr Lyan’s first London bar and also the first bar ever to not use perishables), you’ll find Cub sitting above his basement bar, Super Lyan on Hoxton Street: 153 Hoxton Street, London, N1 6PJ, www.lyancub.com

On the Menu: The team have had input from Dr. Arielle Johnson, former resident scientist at Noma and current flavour scientist and Director’s Fellow at the MIT Media Lab, because at the heart of the Cub menu will be experimentation. Menus are set and don’t give much away – they’re just clusters of ingredients dotted across the page, highlighting that the meal is fluid. So, for example you might see green tomato, fig leaf and white peach or violet carrots, blackberries and fennel tips. There is also no definition between which are dishes and which are drinks, an example of how they are blurring the lines between the two.

The Look: There are three striking things about Cub: 1) the bright, canary-yellow banquettes which will cheer even the hardest of London hearts; 2) the table tops, they might look like marble but in fact they’re made from yoghurt pots, the silvery flecks are bits of foil from the lids and 3) the teeny, tiny open kitchen there’s no chance for angry kitchen drama. How they create such impressive, delicate dishes in such a small space is a marvel. Proof that however small our London kitchens might be, we cannot use the lack of space as the reason that we are always eating out.

What We Ate: On the menu five of the courses are dishes. There’s an excellent bone broth with seaweed and served with hunks of bread and butter, the buttermilk left over from the butter is then taken and used to make ice cream for the pudding. The experience starts with a whole, skinned yellow tomato with rich, Muscat grapes and lemon verbena. Then there’s a pretty dish of chervil root and sliced pirouette apple, with a touch of miso and turbo whey. The whey comes from the cheese making and is then reduced over four hours and emulsified with butter and salt. Shrooms on Shrooms should really be Shrooms on Shrooms on Shrooms on Shrooms as the humble mushroom is served four ways: raw, roasted, duxelles and as a broth – but that would be rather a mouthful. As our waitress said a lot of restaurants use many ingredients in one dish, but Cub prefer to use one ingredient many ways. We finished with fig, apple, the buttermilk ice cream and chocolats filled with leftover fruit. Dishes were light and adventurous and besides the bone broth, vegetarian, normally something we would notice but it wasn’t until the end that we realised we had had no meat or fish.

What We Drank: From the drinks that were served, there were two that really grabbed our attention, the first a little coupette of Krug Champagne with water jelly and spiked herbs and a bright pink glass of Mr Lyan Scotch with banana, fermented carrot and sumac. Ignore the word fermented, the sweetness of the carrot and the banana work together with the Scotch beautifully, if you aren’t a fan of Scotch, try this, you’ll be surprised. We finished with a punchy drink of Square Mile Coffee, Cognac, H.M.S and peach – it had quite the kick. 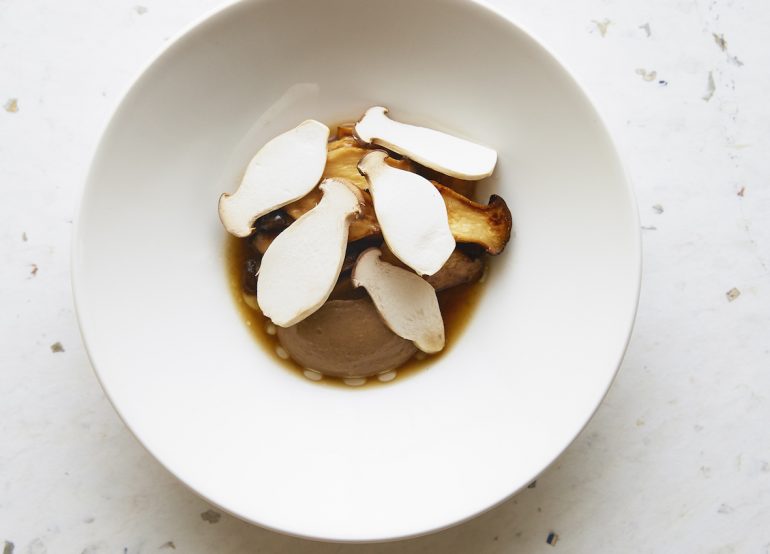 Go With: This one is for your more adventurous foodie friends, if your idea of eating out is steak, chips and sticky toffee pudding this isn’t for you; but if you’re keen to try out different flavour combinations then book now. If you’re going as a two, you might have to share a table, so prepare to get cosy.

Final Word: People might be drawn to Cub because of Mr Lyan and whilst they might want the food, drink and ethos of the place to be the selling point, if his name gets people through the door and learning about sustainability then that’s a good thing. That said, they don’t bombard you with it, unless you ask they won’t tell you, they don’t want you to leave feeling guilty, just more aware. We do need to start cutting down the amount of waste in the restaurant industry and if it that means turning unused lemon slices into free lemon sorbet and charging 20p for bamboo straws that you take home, then we’re on board.