What? Interestingly, there’s one guest who’ll never be visiting Galvin At Windows: The Queen. That’s because it’s the only building that The Queen refuses to ever enter. Stringfellows and Spearmint Rhino – she’s not come off the fence, but London Hilton Park Lane (on top of which Galvin is balanced) is where she draws the regal line.

The hotel was put up in the ‘60s and against the express wishes of the monarch, given that it soars above Buckingham Palace and offers guests untrammelled views into her garden.

The hotel itself has a real corporate feel, you can guarantee that you’ll have to push past throngs of delegates arriving for a conference, which gives it a weird feel. But upstairs, in the restaurant, it’s a different story altogether, the restaurant is beautiful. Galvin At Windows is the incredibly successful haute cuisine restaurant on the 28th floor of the London Hilton on Park Lane. It’s won Chef Patron Chris Galvin a Michelin star and one mouthful in it’s pretty obvious why.

Where? At the top of London Hilton Park Lane 22 Park Lane, Mayfair, W1K 1BE, www.galvinatwindows.com 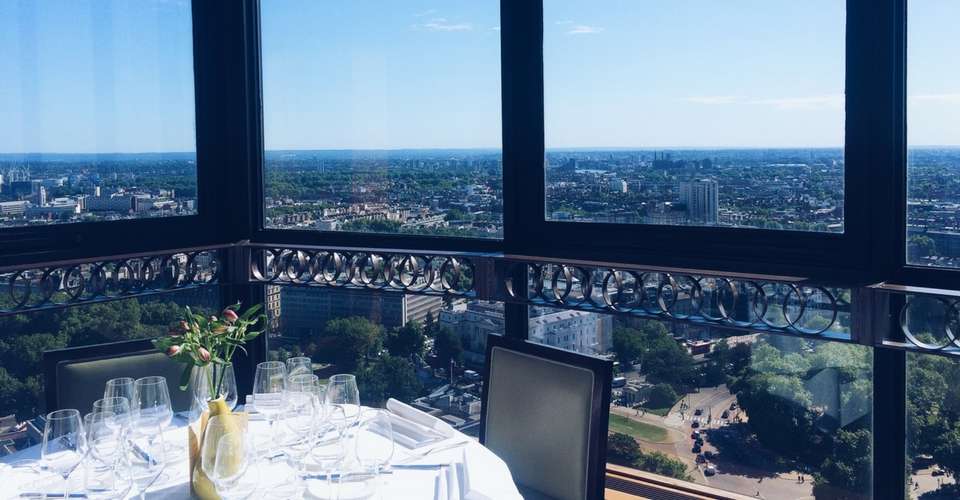 The Look: The design harks back to an earlier era, predating the entire building by about 40 years with its art deco fittings and styling and its crisp linen tablecloths. Not that you’ll really notice, of course, they could have themed it on a hen night in Blackpool and you’d still only be looking at one thing, the gorgeous view across Hyde Park and out toward the sunset.

What We Ate: I started with the terrine de campagne, foie gras with quince purée, pickles and served with sour dough which was, as you’d expect, impeccable. My husband happily tucked into his marinated Iberico pork, mooli and fermented chilli purée with enough gusto to tell me that it was more than half decent and moved onto his baked fillet of hake, Beaufort crust, pork belly, chilli along with hispi cabbage. Meanwhile I got involved with a main of fillet of Scotch beef, braised shallot, foie gras toast and red wine jus. Everything was cooked to perfection, I know this is meant to be a critical review, but it was just so splendid!

Food aside, the service was extremely attentive and friendly as, in fact, were our neighbours. So much so I was convinced that they (the couple on the table next door, not the waiters!) were swingers and actively hitting on my husband and me! Suffice-it-to-say my other half was definitely not of the opinion that anything keys-in-the-bowl-ish was on the cards but nevertheless made an excuse for us both to take in the view and we went out-the-back onto the balcony and admired the yawning expanse of London that started at our feet. It’s difficult to get out in words how beautiful London really is, I’d swing with the London Eye in a second! It’s just so desperately pretty. But so was the fillet of Scotch beef so it was straight back inside to finish a divine meal courtesy of Monsieur Galvin.

Go With: Everything, it’s all amazing. Make sure you ask for a window seat, most of them are but there are some sad souls who end up placed in the middle, forever straining for skyline glimpses.

Final Word: The Queen doesn’t know what she’s missing. The steak was fantastic, and did I mention the view?

Like This? Try These: Duck and Waffle, Hutong, Aqua Shard