What: You know the OXO Tower, you might recognise it from its glowing red ‘OXO’ sign that illuminates the London skyline? Well it turns out they have a restaurant at the top, the ingeniously named OXO Tower Restaurant, and the food is actually pretty good.

New? They have just launched their spring menus while the restaurant, alongside the bar and brasserie, has been around since it opened in September 1996 making it Harvey Nichols’ very first restaurant.

On the menu: As the menu has changed with the weather, so the dishes have reflected the adjustment in seasonal produce with options like creamy smoked ricotta with butternut squash granola and heritage beetroot as a starter, followed by hand-dived scallops with spiced lentils, sweet potato gel and crisp lotus root, and desserts such as rhubarb and yoghurt panna cotta with gin sorbet. 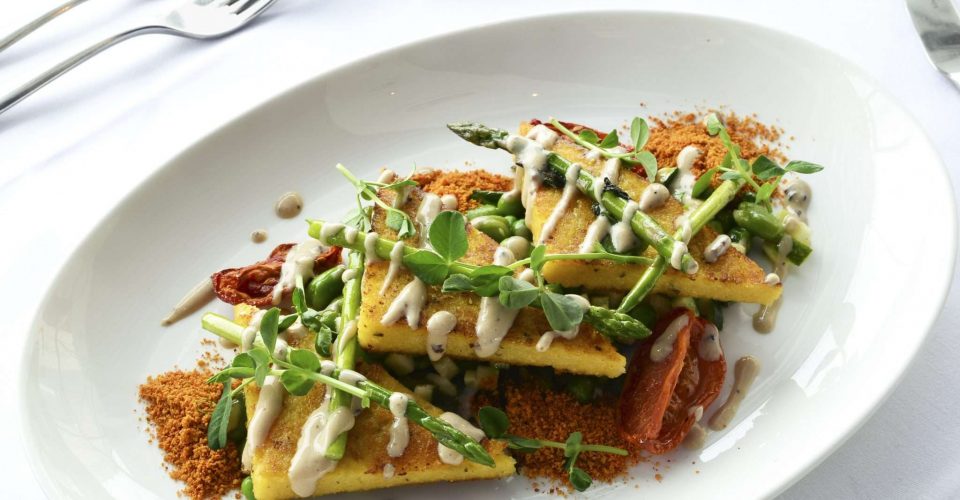 The Look: It has a clean almost sterile feel to the restaurant, there’s a lot of white and navy, but it seems as though the interior is set up in this way so as to not take away from the view (albeit it wasn’t much to look at it on the soggy spring day when we went). Staff is very diligent and the service is polished, everyone seems to know what they’re doing and made the experience seamless from the moment we walked in.

What We Ate: The smoked ricotta with butternut granola and heritage beetroot is a looker when it arrives, the golden and red beetroot providing vibrant pops of colour. Smoked cheese isn’t my favourite but it’s only subtle on the ricotta and combines well when you load up your fork with a little from each of the ingredients on the plate. The Marinda tomato tart with goat curd, honey, garlic, almonds and maple was more enjoyable than I thought it was be even though I obviously chose it because it sounded tempting; buttery pastry is topped with various vegetables as well as a tube of pasta and melting goats curd and spinach. Broccoli is one of my favourite vegetables so when OXO Tower Restaurant upped the ante on it for their side dish by pouring melted brown butter and almonds on it I was all over it.

The pear tarte tatin with vanilla crème fraiche was out of this world, my blood sugar level spiked so severely I’m still recovering but it was worth it.

What We Drank: Keeping it civilised at lunch I opted for only one cocktail which was all that was needed as it was delicious. Fleur du Jour perfectly balances an alcoholic kick with a sweet and fruity flavour; it’s also topped with an amazing custard-like honey and apple foam.

Go With: The crowd here was a tad on the mature side, the minority of people that came in under 30 were accompanied by an adult – a proper adult with saving bonds and a set of fish knives in their kitchen. This seems like the kind of place that those with a lot of money come to for a casual meal even though it’s fairly easy to rack up the bill to something that will have millennials wincing.

Final Word: I was pleasantly surprised, OXO Tower has been on my hit list for a while and it didn’t disappoint. The glowing red OXO seems a lot higher up from the ground than when actually dining but London from too high up tends to look overpopulated and industrial anyway. 8 floors up at OXO Tower Restaurant you have idealistic, eye-level (ish) views of iconic landmarks like the Thames, St Pauls and Big Ben. As mentioned the service was impeccable and I really enjoyed the food, both in presentation and taste.

Like this? Try these: OXO Tower Brasserie, Searcys at the Gherkin, Aqua Shard