What? Pink palace, sketch, has put a French spin on their covetable afternoon tea.

New? The French-inspired afternoon tea was added to the menu earlier this year after an expedition across Britain by the restaurant’s French chefs saw them reinvent the traditional tea with a sprinkle of French flair.

On the Menu: Traditional afternoon tea is split into a more digestible affair, with a journey for the senses told through a storybook complete with quirky illustrations and poetic tales of the tea’s new ‘characters’; The Caviar Man and Tea Master. It’s a suitably chic affair but nothing is quite as it seems, so as you’re guided through sketch’s take on eggs and soldiers, finger sandwiches, pastries, scones and cakes, there is a surprise at every stage. As you’d expect, tea gets a lot of attention too, so make the most of the tea trolley as it is wheeled over and select your brew by smelling the leaves or trusting the ‘Tea Master’s’ advice.

First Impressions: You’d be forgiven for walking right past sketch and finding yourself further down the street. A relatively discreet entrance barely gives away what is inside but hopscotch drawn on the stone floor of the hallway leads the way through to The Glade and round to The Gallery. Afternoon tea was well underway when we arrived so we settled down into our pink corner and got started. 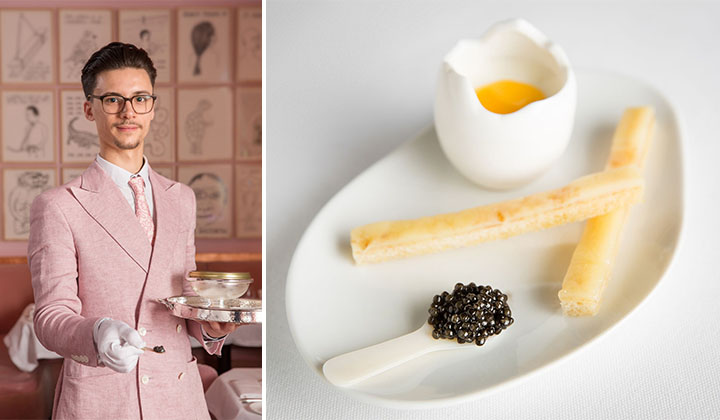 The Look: The ‘pinkness’ of sketch’s main Gallery room doesn’t really need describing. One of the most iconic restaurants in London, if not the world, walking into the room is special in itself. We sat at a corner booth on the cloud-like pink velvet banquettes, looking out over the bustle of afternoon tea service. Make sure you pay a visit to the loo as well – the famous white pods have to be seen to be believed.

What We Ate: Far from being sat with a menu and left to your own devices, the sketch experience involves you from the start, with each stage acting as the next part of the story. Drinks are sorted first, before the ‘Caviar Man’ appears at your table, clad in a pink linen suit, bowler hat and white gloves. What he has to offer is a mother of pearl spoonful of Oscietre caviar, delicately scooped from a huge silver bowl of the stuff. Creamy and nutty, this is considered one of the most refined caviars of all and is offered to everyone as part of the tea offering rather than being something you gaze at enviably from across the room. A sketch take on egg and soldiers means comte fingers ready to dip into a comte cheese mornay ‘egg’ complete with 63° yolk served in a china egg cup. You’ll want to scoop out every last spoonful – it’s delicious.

Tea in the Gallery effortlessly ebbs and flows. In a room as big as this it would be easy to forget a table in the corner but service was flawless throughout, with glasses topped up and a string trio playing familiar favourites. They didn’t rush things either so you felt that the table was yours and there wasn’t a queue waiting to jump in as soon as you swallowed the last scone. 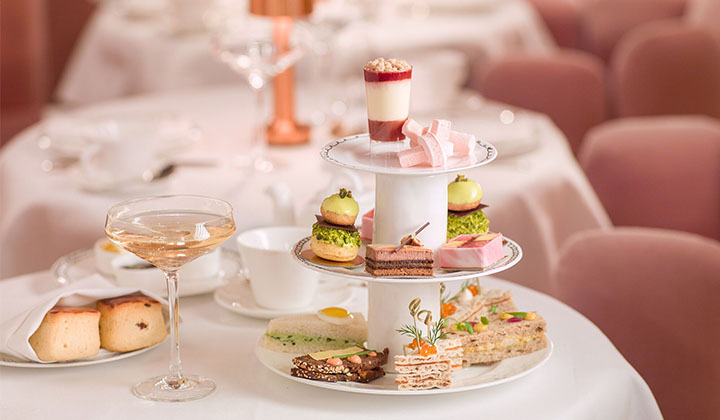 The highlight of any tea, the tiered cake stand was a colourful feast for the eyes. Impeccably garnished sandwiches and fine French pastries were each works of art in their own right. Coronation chicken on malted bread was by far my favourite and Norfolk goose egg and mayo on white was my guest’s, topped with a perfectly runny quails egg that oozed as you bit into it. We got seconds. Scottish smoked salmon and Jacob’s cream on Arctic bread was also good, but the pumpernickel wasn’t so popular.

Up a tier and the pastries were almost too pretty to eat. Chocolate and caramel gateau was a favourite; rich layers of mousse-like chocolate on a crisp base, while the pistachio petit choux were light and fluffy, stuffed full of pistachio cream. Lemon and strawberry Battenberg cake, French bubblegum marshmallow twists and Lincolnshire rhubarb ‘cheesecake’ were there for the sweet-toothed and once you’ve tackled the layers you can request more, though we stuck with the sandwiches. There was much more to come.

Sketch serve their scones warm, tucked up in a napkin and so wait until you’re ready till they bring them over. We requested ours with raisins in, then piled them high with organic strawberry jam and a dollop of clotted cream (the Debrett’s-approved, Cornish way), though they also came with a pot of organic fig jam, should you want to break with tradition. They make their scones square and if you’re wondering why, it’s a wastage-reducing method that came about during the war.

Our clothes were stretching by this point but the finishing touch to the sketch afternoon tea experience is cake. Served from the trolley, Victoria sponge was divine (not one for the calorie counters – hello, cream) whilst fudge and banana loaf was dense and sticky and had we not been as full, we would have devoured every mouthful.

What We Drank: First up: tea and Champagne. Tea-infused Champagne is a sketch invention, inspired by lazy days in St Tropez. A special blanc de blancs is made especially for the restaurant from a small family-run Champagne house. Sweeter than normal, you choose if you’d like it infused with chai, vanilla or Earl Grey. We opted for the Earl Grey and ended up with a really refreshing, cocktail-like drink, served over ice and fit for any summer’s day. Tea was next and far from a tea connoisseur I opted for a black Sri Lankan Ceylon breakfast tea. My guest started with Moroccan mint tea, before switching to a herbal infusion of whole rosebuds. The tea is brought over perfectly infused so you may wait a little while – no straining your own brew here. A special mention must go to the crockery. Teapots scribbled with ‘ghosts’, milk jugs with ‘dreams’ and tea cups revealing ‘forget about it’ compliment the quirky selection of David Shringley’s art on the wall and are actually available to buy on your way out should you want a taste of the sketch experience at home.

Go With: Go for a special occasion; this is one to be Instagrammed every step of the way.

Final Word: Forget generic teas in soulless hotel dining rooms, sketch’s tea is head and shoulders above the rest. It doesn’t come cheap but when you can describe your visit as an ‘experience’ that explains why. Book online a month or so in advance and countdown to a whimsical experience you won’t be forgetting in a hurry.