What? Inspired by both the Italian and French Rivieras, Rivea London serves vibrant food with a focus on local and authentic Mediterranean produce. The kitchen is headed up by Executive Chef Alexandre Nicolas, under the guidance of Alain Ducasse, and has just launched a Sunday feasting menu which we headed over to try.

New? Rivea London was established in 2014 but the Sunday feasting menu is brand new, launching in mid-February and sticking around until 16th April, aka Easter Sunday.

On the Menu: The Sunday feasting menu is exactly what you’d hope for, albeit a little more gourmet than your usual homemade standards. Designed for sharing with family and friends, the format is two starters per person, one main to share and individual puddings to end on. The starters are small (so you’d hope if you’re having two) and light – think stone bass carpaccio, Rivea’s signature salad and octopus salad and whilst the mains aren’t ‘heavy’ they are satisfyingly hearty, inspired by family feasts of Provence and Italy. A leg of lamb, whole roasted lemon and thyme chicken, côte de boeuf, dover sole and pork chop cover all bases. Puddings are the work of pastry chef Xavier Mertz, who cites chocolate one of his favourite ingredients to work with. Arranged at a central tables, guests can admire the selection before making a decision.

First Impressions: Hotel restaurants always divide me. Whilst you have the potential of impeccable hotel-standard service and the luxury of roaming around between bars, restaurants and lobby pretending you’re a guest you also run the risk of a soulless dining room occupied by a very mixed clientele who are either too jet-lagged or too unimaginative to visit a potentially better and most-likely cheaper restaurant nearby. Arriving at the Bulgari Hotel, tables in the lobby were mostly occupied and the bar was the same. We got a friendly welcome from the barman as we walked through, and were led to our table, down the impressive sweeping staircase. 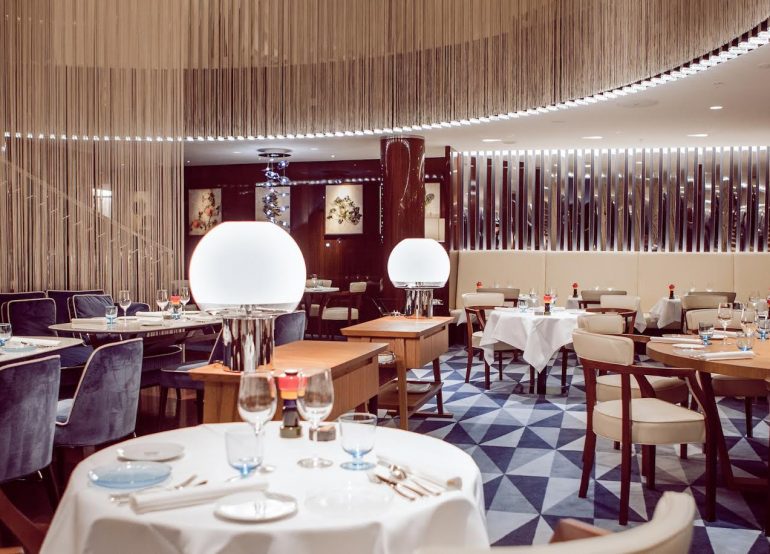 The Look: Situated as it is within a designer hotel, it’s only fitting that Rivea London is equally design-conscious. Kitted out by an Italian architect, the space is airy and glamorous, despite the lack of natural light. Fringing dangles along the edge of the stairs, separating the space from the restaurant, creating movement when people pass, whilst smaller touches were noted like the pearlescent purple cups and saucers and the chunky block colour pepper grinders. Splashes of sea blue and cream hint at the Riviera theme and rich varnished mahogany reminded me of being on a yacht. In fact, being in the basement, it’s actually easy to trick yourself into thinking you’re on a boat. If Rivea was a boat it would definitely be a superyacht.

What We Ate: The starters were definitely small enough to justify having the equivalent of two each and whilst I love the sharing concept, I think 3 between two would be a better suggestion, especially when you know what’s coming. Of the starters, stone bass carpaccio was delicate and fresh, sprinkled with sundried tomatoes, black olives, pine nuts and a drizzle of balsamic – a Mediterranean twist on a South American classic. Charred octopus was another winner, served with chunky confit potatoes, chickpeas and sundried tomatoes (we were seeing a theme). The Rivea salad came wrapped in the restaurant’s signature socca – a chickpea flour pancake – and was good but the seafood was still our favourite.

The mains were fantastic. Milk-fed leg of lamb was pink, sliced into shareable chunks as well as meat on the bone for those who like the knobbly bits (me…). The presentation was vibrant and colourful, proving that at Rivea London the vegetables aren’t an afterthought, they’re as important to the dish as the meat itself. When every individual component tastes this good you know you are eating seasonally – what’s more spring-like than roast lamb? The whole dover sole was just as good. Served on a platter (the crockery here makes you want to reevaluate your boring white plates at home) generously strewn with spring onion, capers, black olives and, surprise surprise, sundried tomatoes. Flaky yet meaty, the fish was cooked to perfection.

We tried most of the desserts, proving that our eyes were bigger than our stomachs and when they are so beautifully displayed it’s hard to pick just one. The cheesecake was, unexpectedly, our favourite even though it’s on the menu as ‘Our Favourite’ – we should have known. Slowly baked for 8 hours, it had a rich flavour unlike one I’d tried before – and not of lemon or vanilla. The piedmont hazelnut choux was the most visually impressive pudding and the Amalfi lemon and meringue tart the runner up. Chocolate tart proved the pastry chef’s chocolate skills – not for the faint-hearted, it was divine.

What We Drank: Our Sommelier proved us all wrong with a Chardonnay that wasn’t sickly sweet – in fact it was light and refreshing, and complimented our starters wonderfully. With the mains we got a Pinot Noir from the same winemaker. Once again it was lovely. Rivea London champion artisanal producers and iconic winemakers, reflecting the menu with wines from Provence, Corsica, the South of the Rhône Valley and the French and Italian Riviera. Fresh mint tea was needed after the feast and came served in giant teapots and covetable pearlescent purple cups and saucers.

Go With: At £48 per person for two starters, the sharing main and a pudding each it actually works out as very good value. Bring your friends or family for an Easter feast and save yourself the washing up of a DIY Sunday lunch.

Final Word: Rivea London’s Sunday feasting menu is everything you’d hope for. Seasonal and vibrant, the food was as beautifully presented as it was prepared and whilst you leave feeling full you know the food is nourishing. A very memorable meal out.

Like This? Try These: 11 Ultimate Sunday Feasts You Have to Try

11 Ultimate Sunday Feasts You Have to Try

10 of the Best Places for Sharing Plates

Holmes From Home, We Check Out This Sherlock Themed Hotel