New? Swan has held a decade-long partnership with Shakespeare’s Globe but March saw the appointment of Allan Pickett (of critically acclaimed Piquet) as Executive Chef and an extensive refurbishment to elevate the restaurant into a new era.

On the Menu: Allan has brought a taste of his classical French training and use of strong British ingredients south of the river, with traditional, hearty, seasonal dishes like Old Spot pork belly, Salt Marsh lamb chops and rhubarb crumble tart. Breakfast, Sunday roast, pre-theatre and afternoon tea menus are also available including a Shakespeare-inspired Midsummer Night’s Dream tea and ‘Gentleman’s’ afternoon tea.

First Impressions: An envious setting right on the Thames means first impressions are always going to be good, especially since we visited on an abnormally warm spring evening. Up a flight of stairs you’ll find the bar on the first floor and the restaurant up again on the second. Both spaces are big but the communal tables down the centre of the bar break it up, and a snug area to the left as you walk in looks inviting. The restaurant was busier than expected for a Tuesday night and had a nice buzz to it – perhaps the weather was to thank or maybe people were just happy to be in such a nice environment.

The Look: Somewhere in between industrial and gastropub, the word that sums up the look is inviting. Design-conscious touches like contemporary light fittings and chairs are offset by wooden flooring and old lead windows. The restaurant is more formal than the bar (as you’d expect) which sees a wooden-clad, marble-topped bar, exposed lightbulbs and little stools pushed up against two long tables. Upstairs, a neutral colour scheme with splashed of blue give a sophisticated feel, with a large variety of chairs making each table feel unique. The bar would be a good place to share a bottle of wine and graze over your food whilst the private dining room is a great bet for any event from birthday to business.

What We Ate: Having sat in the bar area with a cocktail we witnessed an impressive array of bar snacks float past. A giant pork pie was particularly memorable and so we hoped the starters in the restaurant followed suit. We started with pork crackling which, rather than the usual crunchy, salty husks, were more akin to prawn crackers – light, aerated and with a definite but more refined pork taste. Don’t think of them as pork crackling and you’ll like them, otherwise you’re in for disappointment. The apple sauce was wonderful though. 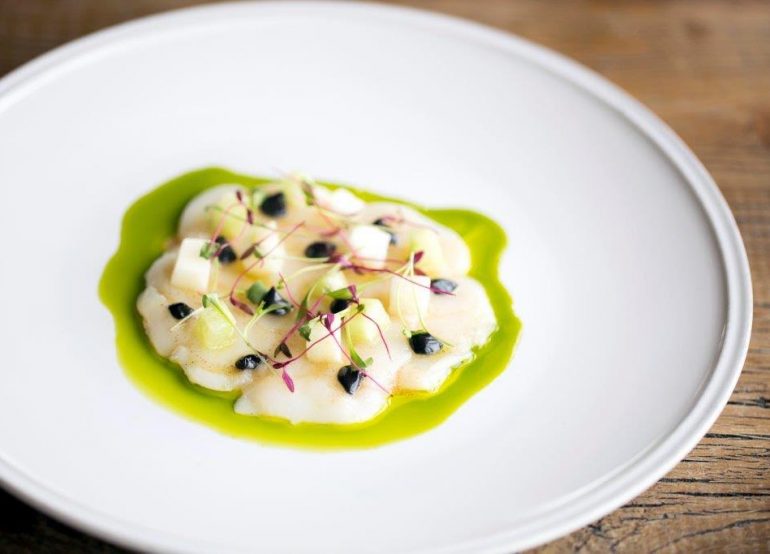 A starter of Old Spot pork belly was served with rich black pudding, creamed celeriac rather than apple sauce, and prunes soaked in Somerset cider brandy. For a starter it was sizeable, but rightly so – get it whilst the weather is still erring on the cold side, it’s proper comfort food. Another strong starter, the waiter was confident the scallops were very good – in fact, I’d go a step further and say they were the best scallops I’ve ever had. Served ceviched they were the definition of melt in the mouth, with tiny cubes of Granny Smith adding a tang and squid ink mayonnaise providing a richness and ensuring the dish was as delicately and beautifully presented as it tasted.

Venison was beautifully tender and was joined by braised red cabbage, a chunky, meaty faggot and brought together with a sharp, tart damson preserve. That said, we couldn’t help thinking the menu was a little on the autumnal side, especially when the evening we visited the window was flung open by our table and we had experienced one of the first warm spring days. The pasta reiterated this – handmade pumpkin tortellini came with chunks of roasted squash, chestnuts, crispy sage leaves and flakes of Fosseway Fleece cheese. Brilliantly homemade, generous in size and well garnished, the pasta was just slightly on the al dente side for my taste. 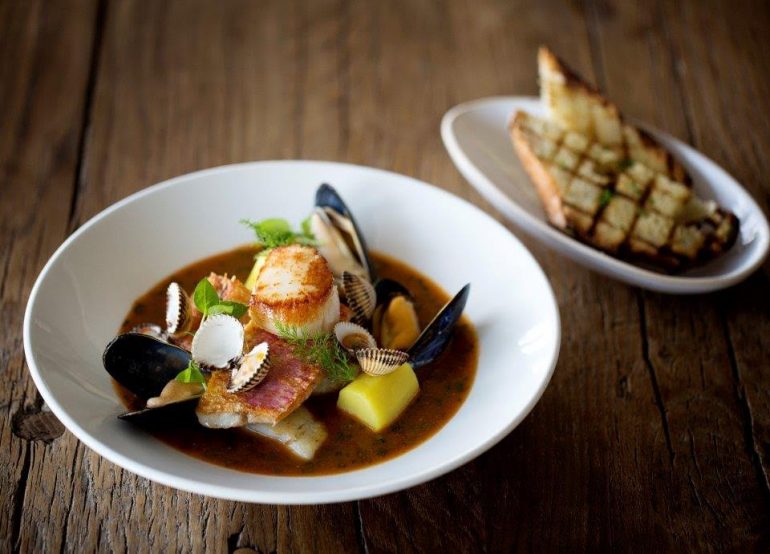 Puddings are satisfyingly hearty, in-keeping with the rest of the menu, and sum up pretty perfectly what ‘British cuisine’ means. Although, again, a little wintery, the rice pudding was rich and warming with plum compote adding tartness. Sticky toffee pudding with clotted cream was the special the day we visited. There were no frills, no variations on the classic recipe, just that burnt toffee, caramelly richness from the sauce, a dense, dark sponge and a satisfying scoop of clotted cream, melting over it. The puddings were huge and very well priced – don’t try and be healthy!

What We Drank: We started in the snug bar area with a Rosemary Collins (rosemary-infused ELLC gin, lemon, sugar, soda) and Lady Marmalade (Chase marmalade vodka, Cointreau, orange marmalade) before having a glass of Picpoul de Pinet with our meal.

Go With: We couldn’t think of anyone we wouldn’t want to take here, whether it’s a date, dinner with your parents or just a midweek supper with your friends, Swan is going to become your go-to restaurant.

Final Word: Swan ticks the boxes for location, interior and food and if you have yet to discover it then you’ll feel – like we did – that you’ve stumbled upon a hidden gem. Book the private dining room for a large party or drop by for a drink in the bar on a summers evening.

Like This? Try These: Dean Street Townhouse, The Alfred Tennyson, The Narrow