What: Loosely translated from Spanish as ‘wine cellar/bar’, Vinoteca is inspired by the characterful wine bars of Spain and Italy and boasts a vast list of 200 wines (25 by the glass) from 20 countries. Wine is also available to purchase to take home but an inviting atmosphere and daily changing food menu makes you want to stay.

New? Vinoteca opened in Farringdon back in 2005 and have since opened wine bars in Marylebone, Soho, Chiswick and King’s Cross. 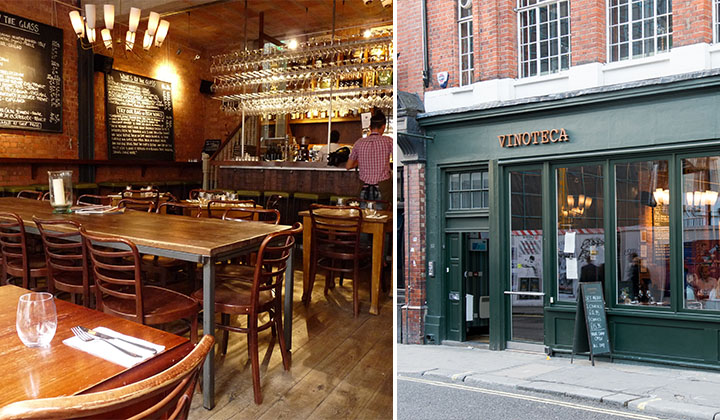 On the Menu: Wine takes precedence here, but far from being overwhelming the menu is split into easily digestible sections; think ‘staff picks’, ‘organic and biodynamic’, and more familiar flavour profiles/regions. Tasting notes from staff, customers and the three founders, Brett Woonton, Charlie Young and Elena Ares, give you confidence and encourage you to be a little more adventurous. Janka from Accounts recommends Cotes Du Roussillon ‘Le Grill’ 2015 (which we ended up having) and Gavin, Shop Manager at King’s Cross, suggests Wild Bay Chardonnay – Au Bon Climat, “This is awesome, give it a go”. The food is designed to compliment the wines and the menu has new dishes added daily, with a strong focus on seasonality, and recommended glasses to accompany each dish. Cured meats are imported from Spain and bread is baked in-house each morning. A fixed price lunch and pre-theatre menu is a steal, whilst Sunday lunch is a little more substantial but still great value.

First Impressions: A Soho regular and wine bar lover, how have I never stumbled upon Vinoteca? It’s not on the liveliest street but was already buzzy at 7pm on a Tuesday, with a couple of people waiting outside for their dates to arrive. Pushing the heavy curtain at the door to one side, the tables were candlelit and the clientele sophisticated, a little older in than many other Soho bars which gave a civilised, laid back atmosphere.

The Look: Rustic and cosy, Vinoteca Soho champions the exposed brick wall/worn wooden bar look. Hundreds of glasses hang above the bar, creating an (unintentional) focal point and blackboards artistically scribbled with the wines available by the glass sit opposite framed old French posters. Mahogany cafe-style chairs and tables are closely packed together but the space feels cosy not cramped, with a wall of wine accessed by a propped up ladder, and further seating upstairs. 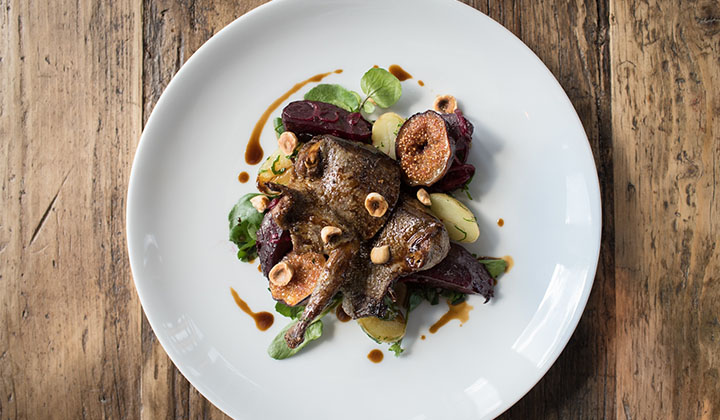 What We Ate: The food menu was concise and seriously appealing – when we walked in the room smelt of mussels so they were an easy choice, swimming in the bowl with a few cockles, in a really garlicky white wine sauce. Perhaps save these for a more advanced date… A simple salad of giant ox heart tomatoes, ripped mozzarella and rocket pesto was as I’d hoped – simply prepared with good quality ingredients, a slice of toasted ciabatta useful to mop up leftover olive oil.

The mains are creatively accompanied – smoked haddock comes with chorizo and lemon veloute and venison loin with parsnip puree and blackberry jus. My Cornish hake sat atop roasted vegetables and toasted pine nuts which added a little bit of earthiness. If you want a light main this would be sufficient but the romanesco, blue cheese, apple and hazelnut salad sounding appealing. A little too light on the cheese front, the romanesco bizarrely tasted frozen. Room temperature is one thing but it was actually icy as you bit through so we picked out the good bits and left the rest. A side of spring greens accompanied the pork belly although it was just a bowl of kale with slightly too subtle lemon butter – some zest would’ve lifted it hugely. The pork belly was delicious – the perfect combination of crispy, fatty and meaty, with haricot beans, red pepper ‘jam’ and a herby broth, whilst the bavette steak on our neighbour’s table looked to be a great choice.

The whole menu doesn’t change daily but there are new additions – on our day it was a classic creme brûlée’s turn to join the likes of sticky toffee pudding, lemon cheesecake and caramel pannacotta. The creme brûlée was good, with a satisfying crack as you tapped the surface although the accompanying shortbread was little on the stingy side. The bitter chocolate mousse was heavenly and a shining example of comfort food simply and appealingly presented. A huge dollop of mousse sat in the centre of the plate, scattered with chunks of honeycomb and a dusting of icing sugar. It was thick and decadent, and everything you’d hope a chocolate mousse to be. One for sharing!

What We Drank: We started with a seasonal rhubarb bellini which was, refreshingly, not too sweet and were then presented with two bottles to accompany our food; one red, one white. Both were appealingly described by our lovely waiter but we plumped for the red; a mid-priced Cotes du Roussillon ‘Le Grill’ 2015, described on the menu as ‘Young and vibrant, a fleshy and ripe spiced-berry cracker that leaps out of the glass, down your throat. Reassuringly untamed’ and recommend by Janka from Accounts for being ‘red wine with attitude: interesting and full of personality’. A good medium-bodied red from Southern France, so south it’s almost Spain. Whilst the wine list is extensive and approachably set out, choosing one is still a big decision so trust your waiter and get them to recommend something new and exciting. 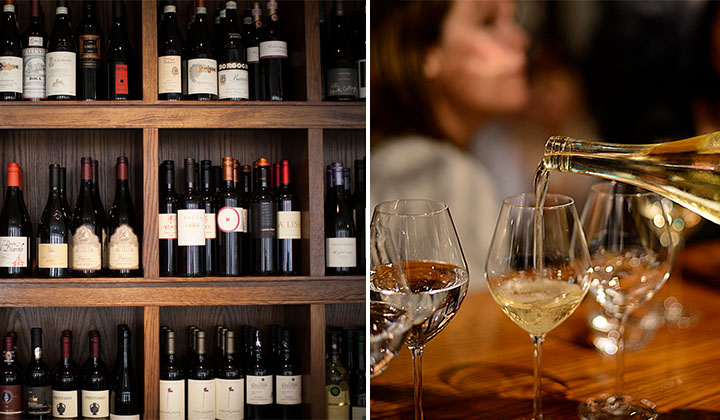 Go With: Vinoteca screams ‘date night’ so check your companion likes vino and you’re sorted. Failing that (it wasn’t meant to be anyway), arrange to see an old friend and settle in for a long, overdue catch up.

Final Word: Laid back and inviting, Vinoteca offers great food and specialist wines with really friendly service. They’ve managed to create a neighbourhood vibe and, unlike other spots in Soho, you don’t feel rushed although if you do have somewhere to head, the pre-theatre menu is a great bet. Oh, and one more thing that sets it apart from places nearby; you can book! Hallelujah.

Like This? Try These: Antidote, Terroirs, The Other Naughty Piglet