What: Based on the idea of market-fresh produce, The World’s End Market serves simple, fresh food made using local ingredients.

New? On the site of the former World’s End Pub, it opened as the restaurant it is now in December 2014.

On the Menu: Meat and fish take centre stage here, simply prepared by grill-searing to lock in the natural flavours, which comes from using natural fresh ingredients. It also boasts a section of ‘the best meat in the world’ – a selection of cuts from world-class Spanish meat connoisseur, José Gordon including carpaccio, flank steak and cured premium ox. 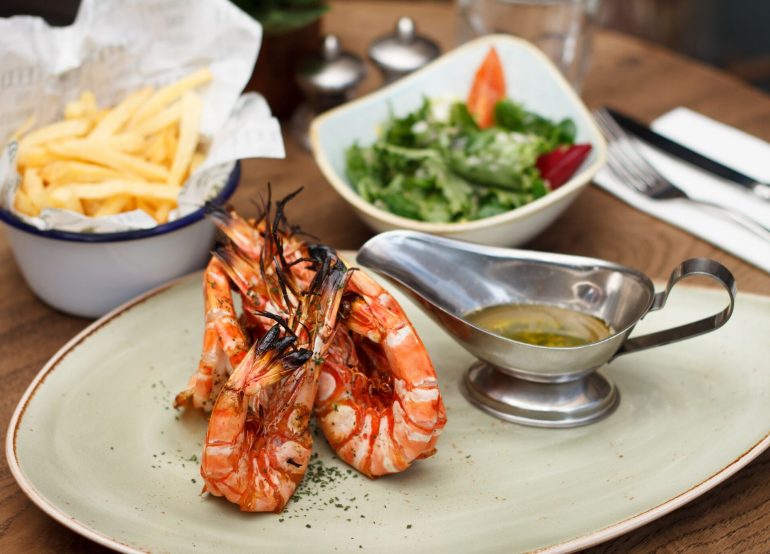 First Impressions: Located on Chelsea’s famous King’s Road, The World’s End Market is at the centre of World’s End, a section of the King’s Road where I spent far too much time and money in my twenties! It’s always been in desperate need of a really great restaurant, so we were delighted when this Victorian pub was converted into a restaurant.

The Look: The restaurant itself is described as resembling a ‘1930’s canteen’ with a bar created from re-claimed wooden crates and artwork by street artist Ninth Seal. Spread over three floors, with a narrow staircase leading up to each, the restaurant is on the ground floor whilst cocktail bar and private dining room are at the top, which has a good size bar at the top – taking around 30 people it’s a good option for those looking to hire a private room. Tables in the downstairs restaurant are divided up into banquettes, booths and communal tables with a few high tables around the bar ideal for a cocktail in a buzzy environment. The kitchen is open plan so you can watch your food being prepared. There is also an open fish display giving it a market feel and a focal wine cupboard is made from a door frame used in the actual Harry Potter Hogwarts set.

What We Ate: Diving straight in to the mains, the grilled lobster got top marks – it was fresh, perfectly grilled and tasted amazing when dipped into the garlic butter. The only downside was it could have been slightly bigger as there was not that meaty, which at £32 makes it quite an expensive treat. The menu was very seafood orientated but my guest opted for the rib eye steak, which came with a generous portion of crispy chips. Cooked perfectly medium rare it was accompanied by a few homemade sauces – very good. It’s worth mentioning here that the options for vegetarians are quite limited. There are three starters but only one main other than the veggie burger – courgette stuffed with tomatoes, pine nuts and goats cheese. The mains were followed by a chocolate fondant which we shared; perfectly soft and gooey in the middle, it was full of richness – everything you’d want of a fondant.

What We Drank: We opted for a couple of cocktails, which they seemed very good at making. We choose an ameretto sour which was surprisingly delicious as I think few places make a really good one.

Final Word: Where The World’s End Market excels is in very good quality meat and fish.

Like This? Try These: Shepherd’s of Westminster, Beaufort House , The Botanist