Rio 2016 is finally here, and it’s going to be amazing. Three weeks of beaches, bodybuilders and Brazilians, all in the tropical paradise that is Rio de Janeiro. But let’s face it, few of us are able to make the long journey to witness the Games in person. Luckily, London has a thriving Brazilian community and a colourful host of Brazil-themed bars who are about to kick off a month of wild parties in honour of Rio 2016. After all, London knows a thing or two about celebrating the Games. Here is our guide to celebrating the Olympics like a Brazilian – without actually going to Rio.

A Brazilian-Inspired Fiesta for the Opening Ceremony

Even if the thought of watching people running, jumping and catching for three weeks fills you with horror, you can’t miss the opening ceremony. After Danny Boyle’s masterpiece last time round, everyone is eager to see how the Brazilians open their games. Head to Hoxton Square Bar & Kitchen for a proper fiesta – expect complimentary carnival masks, delicious Brazilian street food courtesy of BBQ experts Smokey Tails, and of course plenty of caipirinhas. Before the ceremony begins at midnight, the South London Samba band will be kicking things off with some authentic South American rhythms. And not a ball game in sight.

Party Hub for All Things Brazil

Battersea’s Bunga Bunga might have an Italian heritage, but that doesn’t mean that they can’t be honorary Brazilian for the month. They’ve transformed their upper floor into a Latin American beach shack, aptly named Cocobananas, and fully decked out in Brazilian beach style. Expect palm trees, deck chairs, exotic flowers and a Brazilian flag or two – and, of course, a dedicated Caipirinha bar in honour of Brazil’s most famous cocktail. For the Opening Ceremony, Cocobananas will be hosting a Brazilian-inspired supper club with Natalie Salmon of the Latina Cook, who will be serving guests treats like seabass ceviche and avocado ice cream.

For those who truly want to immerse themselves in the Brazilian lifestyle, Hox de Janeiro is your best bet. During the Games, they’ll be going all-out to bring Brazil to London. Samba classes, hula-hooping sessions, surf set classes with Gymbox, even a bikini sample sale – it’s all at The Hoxton. Of course, you can enjoy a cheeky Cacacha-based cocktail or some breezy Brazilian flavours while you master the art of the beach lifestyle. And, for the brave, you can even get a Brazilian body wax…

Cocktail connoisseurs Dirty Martini have whipped up five new creations to celebrate Rio 2016, all made with Brazilian ingredients. Try the ‘Pash Me’ Batida, which pairs Boca Loca Cachaça, Passoa Passion Fruit Liqueur and Orgeat syrup with a splash of almond milk, papaya juice, gomme and fresh passion fruit. Or if you’re after something a bit sharper, get your hands on a Guana del Rio. Made with Havana 3-year rum and Kalani coconut liqueur, before adding Midori, guanabana juice, lime juice and half a fresh kiwi to the party, it’s a carnival of citrus. And that’s without even mentioning the other three cocktails.

An Unusual Caipirinha at one of London's Foremost Steakhouses

Steak lovers have been raving about Smith & Wollensky for ages now, so if you haven’t been here’s your excuse. They’ve created their very own Caipirinha, using Aperol instead of Cachaça, available throughout the Games. Best of all, you can enjoy the cocktail while watching the Olympics in their luxurious private rooms. Now that’s celebrating in style.

Based in the former Olympic zone of East Village, Dark Horse knows more than most about the power of the Games. And they’re honouring the competition which gave them their home with a mouthwatering Latin American set menu. Baked crusted Bacalhau fish, roast hake with pancetta, black beans and chorizo feijoada, finishing off with a lemon custard puff pastry tart with a cashew and coconut batida. Three courses come at just £24.95, with matching drinks available for each dish.

A Bottomless Helping of Brazil

If you’re planning on celebrating hard during the games, a slap-up brunch at Cabana is the perfect antidote. During the Games, Cabana are serving a bottomless Brazilian brunch, bringing the best flavours of the beaches to hungover Londoners. All the classics of brunch are here, only with Latino leanings: like Rabanadas, a Brazilian twist on French toast with condensed milk, cinnamon sugar and chocolate. Or the Açai Smoothie Bowl, featuring frozen açai berries blended into a smoothie and topped with sliced strawberries, bananas and crunchy granola. And since it runs until 4pm, you don’t even have to interrupt your lie-in.

Aside from hosting the Olympic Games, we all know Rio for its outrageous outdoor carnivals. For a bit of the Mardi Gras magic, head to St. Katharine Docks for the Opening Ceremony as Epicurean Events transform their weekly St Katharine Docks world food market into a South American fiesta. Authentic Rio-style entertainment and a whole host of South American street food makes this the best street party to be at for the Games. Opening at 10.30am on Friday 5th and running through till 3pm, the Rio Special Market is an all-day celebration of everything we love about Brazil.

The Closest You'll Get to Brazil Without Being There

If a plane ticket sounds a bit steep or the flight to Brazil a little long, step onto Brazilian soil (almost) with a rare opportunity to visit the Embassy of Brazil in London. Opening its Rio Lounge to the public, you can watch the games live and participate in a range of Brazilian activities as well as sampling food and drink including acai, Brazilian coffee and sugar cane juice. If the sunny scenes have you dreaming of Copacabana, you’re in the right place to enquire about travelling there. After all, Rio is for life, not just for 2016. Monday to Saturday, 10am-7pm, free admission.

If you’re more of a leisurely sports fan then you can kill two birds with one stone when you visit the suitably titled Podium Restaurant at London Hilton on Park Lane. Their brand new Champions Afternoon Tea has been created to honour the summer of sport; classic sandwiches, a lemon meringue cup (we see what they’ve done there) and dark chocolate and raspberry parfait are some of the treats you can enjoy. If there was a gold medal in afternoon tea participation we’d definitely go for gold…

You might not be able to make it to Brazil but you can still have a taste of it at the K-Bar at The Kensington. The ‘Just a little Samba’ cocktail created by award-winning bar manager Ben Manchester is made with Cachaça, Cointreau, Frangelico, cranberry juice and lime juice. It’s available from this Friday (5th -21st August) so you can say hello to the Olympics and the weekend!

The Olympics are no secret, obviously…that would defeat the point somewhat. Somewhere a little more secret though is St Martins Lane’s speakeasy, Blind Spot. They’ll still be getting in on the action though as throughout the games they’ll be serving a special lemongrass and chillie caipirinha cocktail which come with complimentary pãos de queijo – small, baked cheese rolls that apparently sell like hotcakes in Brazil… and now Covent Garden now that we know about them.

If you’re looking for somewhere you can watch the games, why not try these big screens: 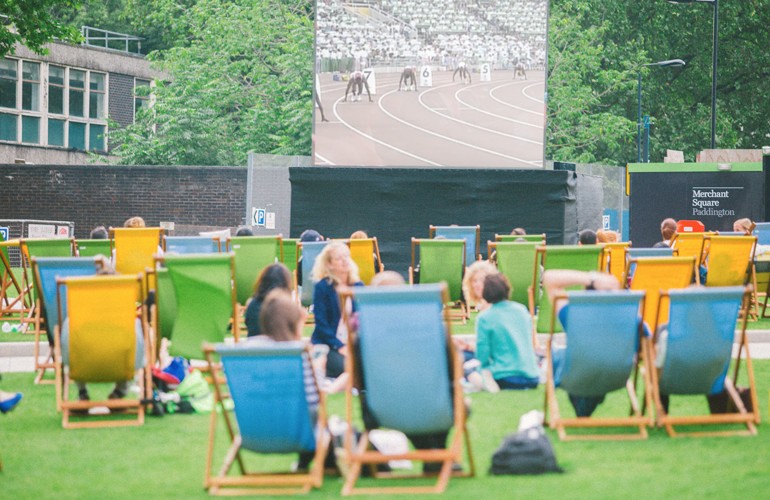