Genoa’s line is ‘More Than This’ and there certainly is more to Genoa than you think. It’s home to pesto, to 42 palaces that are part of the UNESCO World Heritage, they produce 1674 tonnes of focaccia a year, their historic centre spreads over 113 hectares, they have Italy’s major seaport and their borders are dotted with picturesque fishing villages. Genoa is a city you need to add to your Italy bucket list pronto. 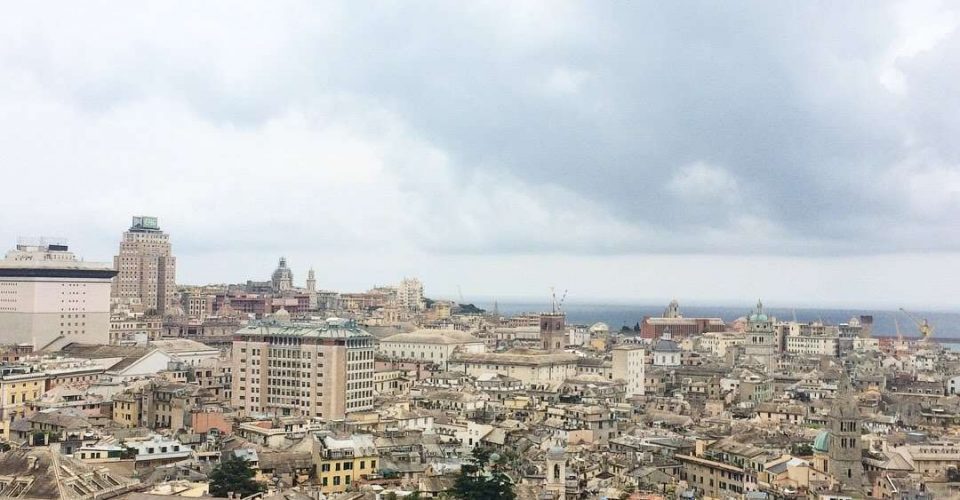 Absorb all of Genoa with a trip to the Spianata Castelletto, where you can take in the rooftops of the city, view the hidden courtyards and gardens and look out over the port where the boats slowly drift in and out. Until 1849 the fortress of Castelletto stood on the high ground protecting the city, but then the public thought it looked a little menacing so it was destroyed… which does somewhat defeat the point of a fortress. To get to the Spianata Castelletto, you can walk up to the top via staircases and bypasses, but if like us, you are too full of pesto by this point take the Art Nouveau lift up from Piazza Portello which only costs a couple of euros – admittedly the entrance does look like something out of the start of a horror film (picture a long, echoing tunnel) but the views are more than worth it. 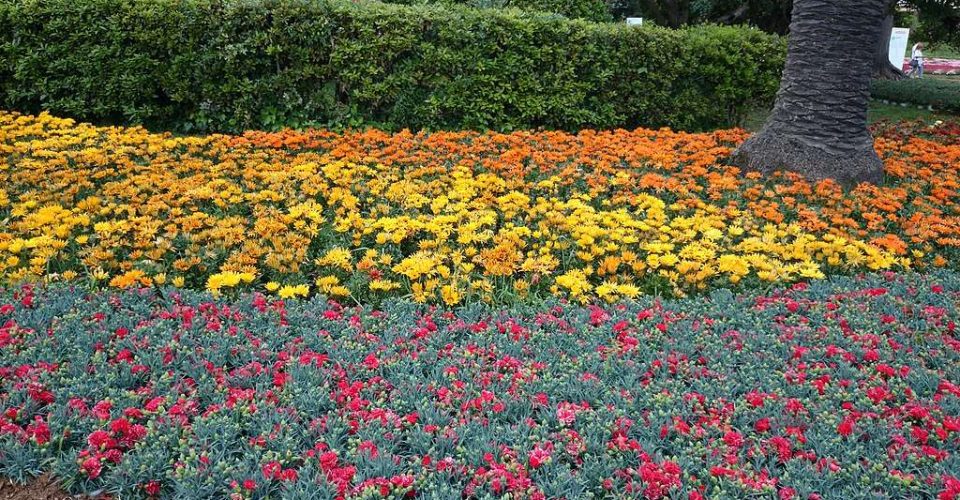 We all know that being an adult is having an impossibly busy schedule and going back and forth with your friends trying to find a date you’re both free and then agreeing that you’ll probably just attend each other’s funerals. Well one of you will. Anyway, if you’re booking your next mini break in 2021 because you’re just.so.busy, then you’re in luck because it will be the next time Euroflora, the most important flower show in Italy, is taking place. This year the 16 day flower festival brought together over 250 florists, gardeners and horticulturalists from countries such as Taiwan, China, the US to the Parks of Nervi, as they were held outside for the first time since they began in 1966. Get lost in labyrinths of plants, wander between pepper and olive trees, find pools filled with water lillies and visit exhibitions in the historical villas. 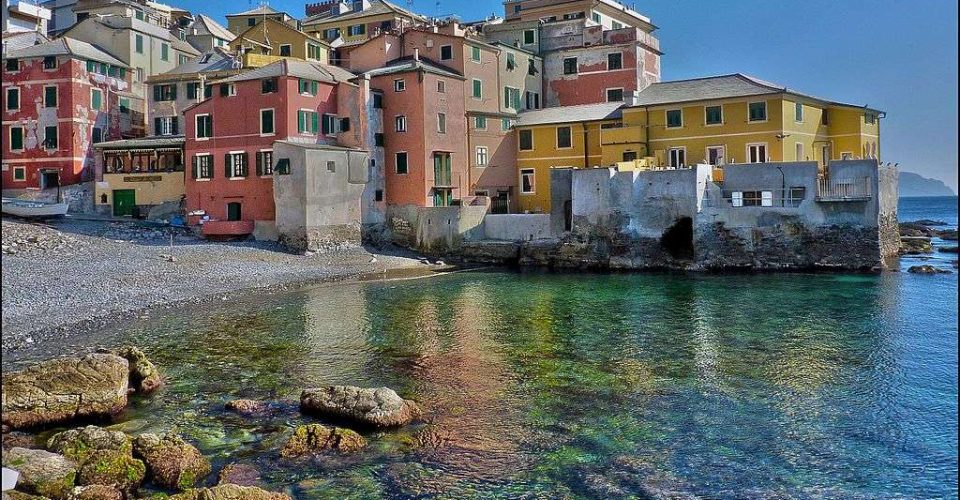 Genoa sits on the edge of the sea and just a couple of kms east of the city centre you’ll find Corso Italia, the main promenade and sitting at the end of this stretch is a quaint little fishing village, Boccadasse. Known for its fish restaurants, naturally, and with buckets of charm, the village is made up of terracotta orange, dusty pink and dirty yellow buildings that cluster together clinging like limpets to a rock as they jut out into the sea. Walk down the narrow alleyways, pick up a gelato and head to the pebble beach.
Image: Patano 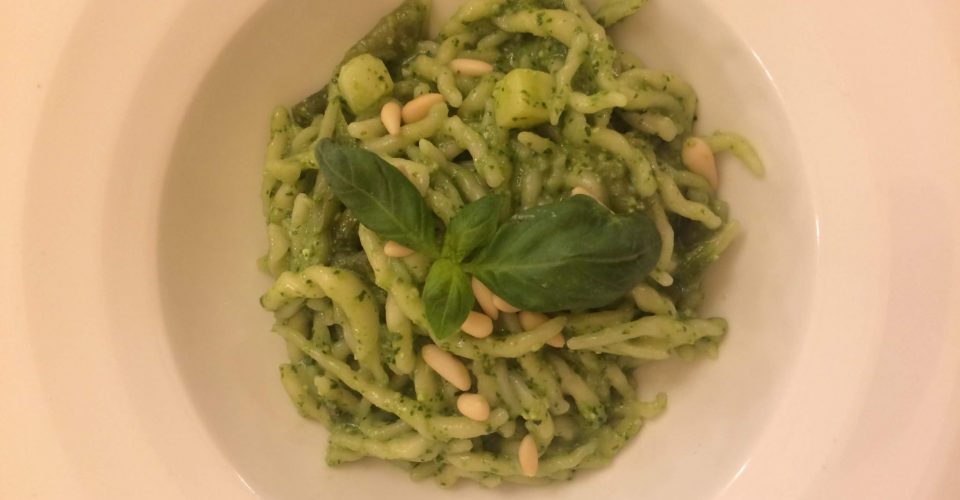 Parma might be known for Parmesan and Bologna might be known for Bolognese (or ragu if we’re being proper) but did you know that Genoa is home to our saving grace of easy suppers? Pesto. Classic Genoese pesto dishes include cooked vegetables like string beans and diced potatoes with gnocchi, making for a deliciously carby experience. And this pesto is good, made with young basil, Ligurian olive oil and garlic (preferably from Vessalico a Province of Imperia in the Liguria region), so good in fact that we’ve all been trying to get it home. The only thing stopping us? The 100ml liquid restriction. Although, if you’re flying from Genoa’s Cristoforo Colombo then you can take up to 500g home with you, all you have to do is make a €0.50 donation to charity Flying Angels. Genius. 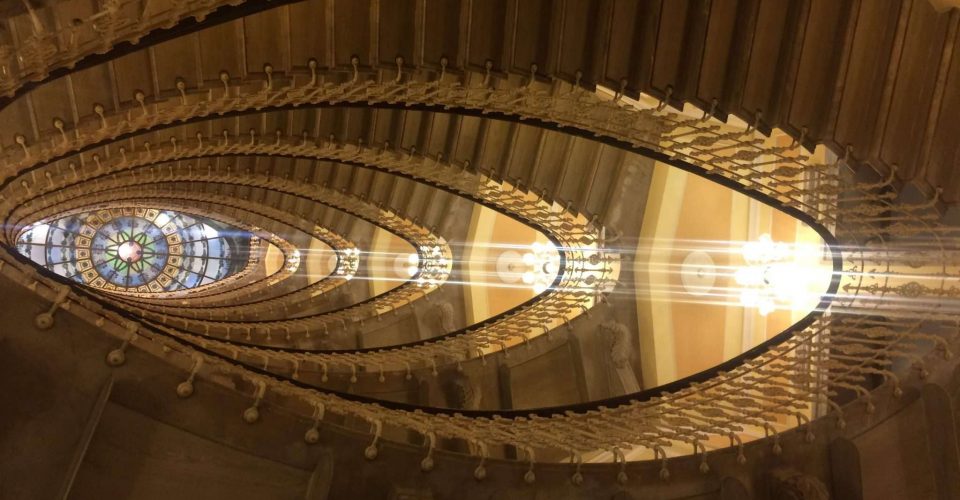 When it comes to staying in Genoa, head for Hotel Bristol Palace. Part of a succession of elegant Art Noveau buildings in the city centre, the hotel opened back in 1905 and was the setting for many legendary parties during the Belle Epoque period and more surprisingly as the German command headquarters during World War 2. Part of the Due Torri hotel group, the hotel was restored in 2014 to preserve its elegant structures and furnishings. It’s got that old-school grandeur about it, rooms are satisfyingly luxurious and quietly expensive. High ceilings, parquet floors, ornate fixtures and marble bathrooms make up the look. That said, beyond the rooms, what really commands attention is the spiral staircase, which is said to have inspired Alfred Hitchcock’s thriller, Vertigo. Look down from the top and it’s easy to see why. 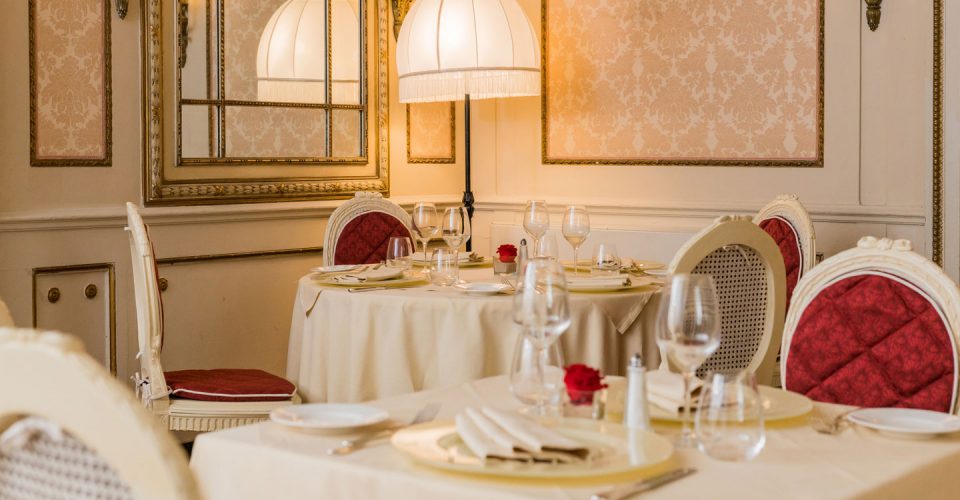 If so far you have spent your evenings in little family run restaurants, then break out, even if just for one night and head to the Giotto Restaurant at Hotel Bristol Palace. The embellished, frescoed restaurant serves up a traditional Ligurian menu with plenty of seafood (a welcome break from cured meats and cheese). Particularly good dishes include the Genoese minestrone, the rolled sea bass stuffed with olives and tomato and of course the trofie pasta with pesto. 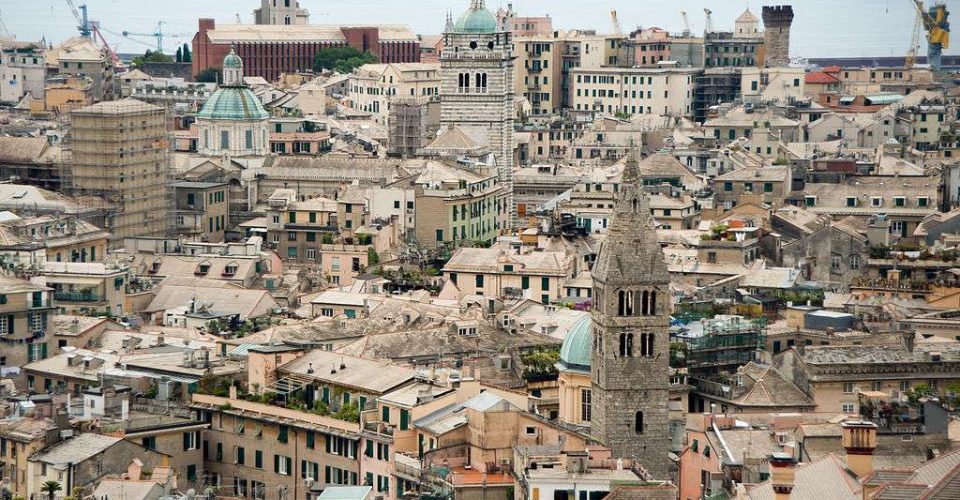 Genoa is home to one of the largest historical towns Europe (it’s 113 hectares), made up from a tangled web of narrow alleyways or carrugi, it’s a maze of independent restaurants, delis, and small squares, leading down to the port. Swarming with the smell of different foods, the noise of different languages and the bustle of life and cultures mixing, they’re a far cry from the broad, wide main streets of the city centre. Spend an afternoon getting lost in the winding streets, where houses are so close that windows almost meet overhead, stumbling upon chocolate and cheese shops, or as we did, somehow ending up in the red light district which was already going at 11am on Wednesday morning.
Image: Mstyslav Chernov 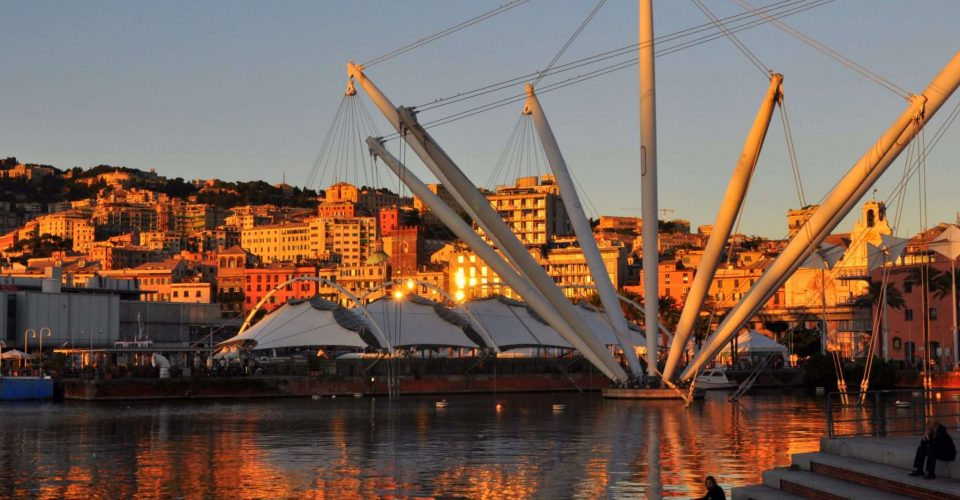 Genoa is home to Italy’s major seaport and thanks to architect Renzo Piano who redesigned the area in 1992 it is now a popular tourist haunt. Emerging from the dark carrugi in the old town, the docklands is home to one of Europe’s largest aquariums, the Bigo panoramic lift which gives 360° of the old town and several museums including the Galata Museo del Mare, the largest maritime museum in the Mediterranean area. To see the city from a different perspective take a boat trip which will show you the inner workings of the harbour and will sweep you along the coast.
Image: Visit Genoa 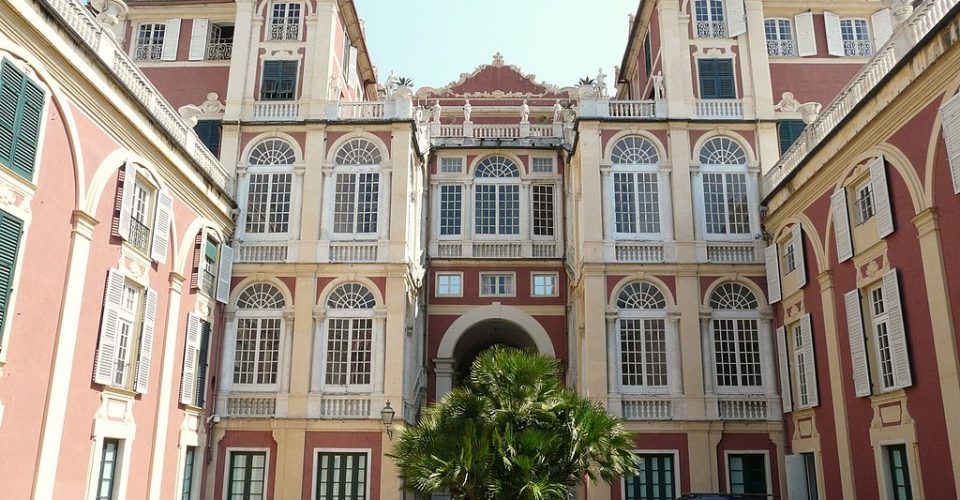 City of Palaces
Genoa really is the city of palaces, there are at least 120 recognised palaces which held great economic and political between the end of the sixteenth century and the middle of seventeenth century. 42 of these palaces were added to the list of UNESCO World Heritage sites in 2006. The most famous area to see these imposing and magnificent buildings is Via Garibaldi. Part of the Strada Nuova or New Street, it opened in the sixteenth century to bring together the city’s most important families in one setting. On specific Rolli Days throughout the year, you can visit the Renaissance and Baroque to discover more about the city’s culture and see some impressive facades, staircases, courtyards and hidden gardens.
Image: Davide Papalini 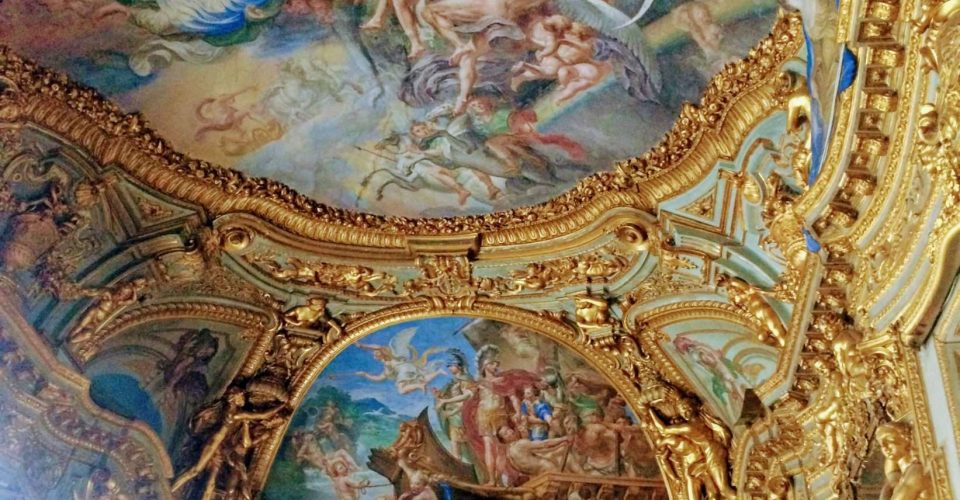 They just don’t make rooms like they use to, sure now it’s all about minimalism and decluttering but no one is going to marvel over them like they do The Golden Gallery in the Palazzo Tobia Pallavicino. Marquis Tobia Pallavicino was one of the richest men in Genoa in the sixteenth century and what does one of the richest men have in his house? A room covered in gold and frescoes. Created by Genoese artist Lorenzo De Ferrari, this was his last and most important artistic task and what a way to round off your career. Now the building is home to the Chamber of Commerce, but visit the room if you can it has to be seen to be believed.

Win This Year’s Rodial Advent Calendar Worth over £250