They don’t call it Sin City for nothing and on cue, as I arrived in Las Vegas, President Trump’s motorcade swept past, headed to a last-minute Mid-Term rally. And to most people, Trump perfectly sums up Vegas. He’s loud and brash; a bit seedy with the women; a high roller who takes enormous gambles. He’s also as orange as the surrounding Mojave Desert and, most importantly, he’s full of contradictions. And so is Las Vegas.

The desert city of Las Vegas rises from the dust, a concrete and glass tangle of skyscraping hotels, 24-hour casinos, fast food and all-day pool parties. Six lane motorways weave between them, ferrying a constant flow of revellers from one form of entertainment to another. This is an entire city designed to prolong enjoyment, to titalate and entice. And who hasn’t wanted to fall under its spell at some point? And so I pilgrimaged some 5,000 miles to answer the call of what’s surely America’s craziest city. Well, after Salt Lake, or wherever it is all the Mormons are. 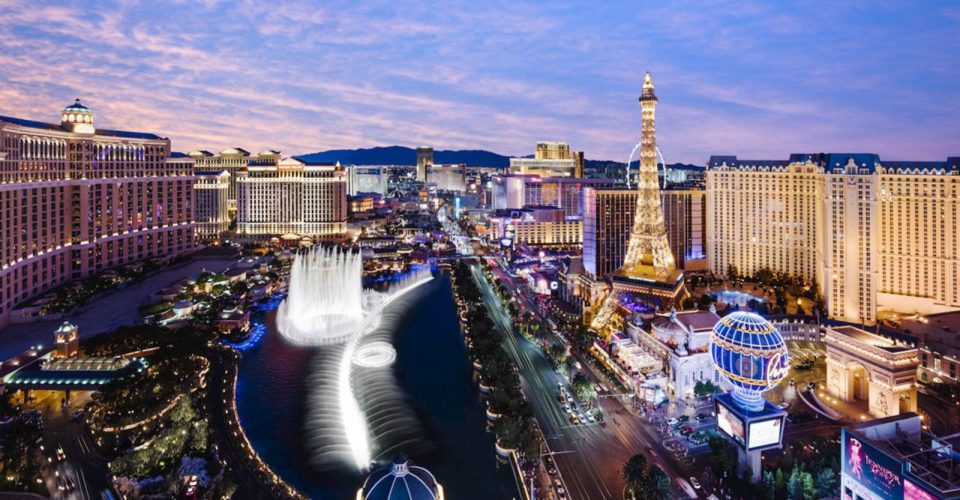 Of course, we like to make sure that we stir in just enough of our own crazy too: the Brits that head to Vegas are some of the nuttiest I’ve flown with. The 11 hour Virgin flight from Gatwick is the only one I’ve ever flown where the Captian’s had to come on the tannoy to explain that they’ve run out of alcohol as the passengers had drunk the 747 dry. While the carnival spirit ended abruptly at customs and the two hour wait to filter through passport control, it set the scene for what might be a raucous ‘what happens in Vegas’-style few days.

Because it turns out there’s another way to ‘do’ Vegas. It’s not necessarily the Vegas that my fellow countrymen were there to experience, but one that isn’t spent losing tens of thousands to Chinese card sharps in an artificially oxygenated room, or tucking dollar bills into Tiffany or Crystal’s underwear at one of the city’s plethora of adult entertainment establishments (a dead (yes, dead) Vegas brothel owner won election to the Nevada state legislature days after I left). Because Las Vegas has a different side. It’s got culture, fine dining, refinement; and most importantly it’s opening up to a different demographic. People who don’t wear Ben Sherman, who don’t down pints of Stella for breakfast and people who aren’t lobotomised pleasure-Zombies from Wigan. People like me. 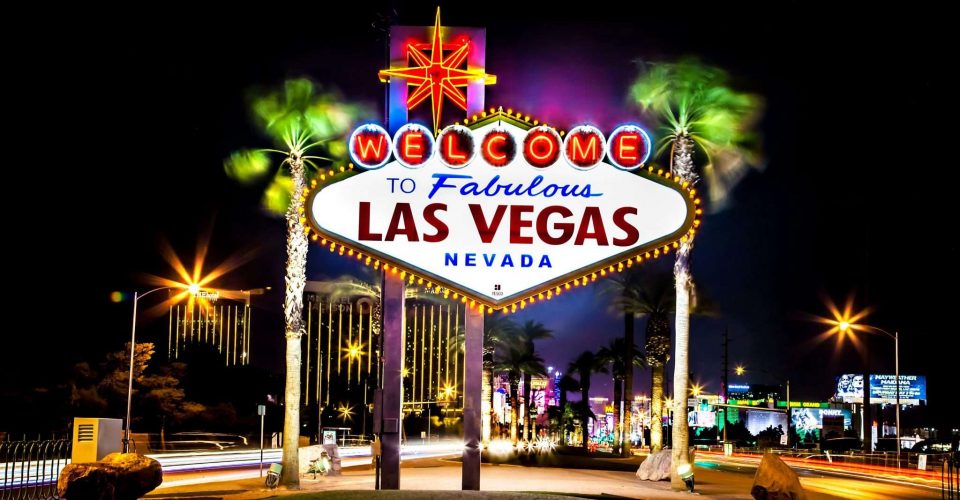 I may have been staying in a casino (hotels without casinos are surely the unicorns of Las Vegas) but I has culture on my mind, I was heading to a gig. Life Is Beautiful is an annual music festival held in downtown Vegas, away from ‘the strip’ that we’re used to seeing in endless films and adverts (think mini Eiffel Towers and ferris wheels). Downtown, the buildings are low-rise and the vibe is decidedly cooler. There’s almost a college campus feel, centring around East Fremont, which bills itself as a ‘cultural hub’. And for three days a year, 18 blocks are cordoned off for Life Is Beautiful.

What’s noteworthy, other than the line-up, is the audience. This is not a Vegassy crowd. I watched Florence + The Machine next to a girl eating a stuffed pepper and drinking Prosecco (albeit out of a plastic pint glass). If the likes of Florence, Arcade Fire, Major Lazer, Catfish and The Bottlemen and so on didn’t float your boat, there was live comedy, artisanal food producers, street art and art installations. 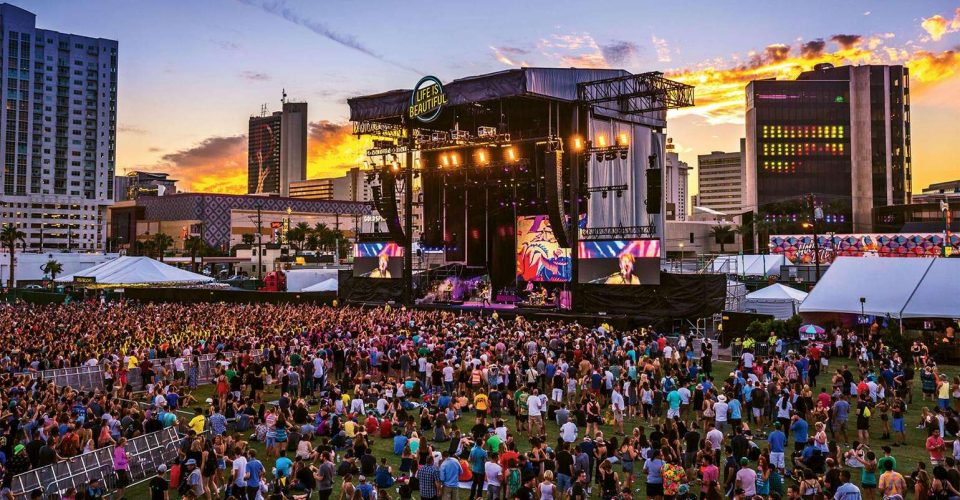 I’m not going to go all NME on you and attempt to review the live music. Suffice it to say it was all jolly good, you should go and you should pay extra for the VIP tickets, if you can afford it, it’ll make your life a whole bunch simpler. But what really struck me is that this place was crammed with an America a million miles from the one that Donald Trump was reaching out to in a cross-town conference centre, or the one epitomised by the bright lights of the strip. This was far more liberal place (except for the policeman who nearly arrested me for ‘jay walking’ (and arguing back)), a Vegas that accepted and embraced differences in race, sexuality or politics. And I’ll raise a stuffed pepper to that.

But even in uptown Vegas-Vegas, there was an undercurrent of something different, if you wanted to look for it. The food scene is seriously up-and-coming. Yes, you can dine in luxury, I particularly enjoyed Scotch 80 Prime, a steak restaurant that’s on-par with anything that a half-decent European city can throw at it (and conveniently also in my hotel, the Palms Casino Resort). But there’s also the brand new food court, Block 16, at The Cosmopolitan. Run by a British Head Chef it rocks a sort of Brixton or Tooting Market feel, but done with American style (so no phone unlocking shops, nail bars or West African fashion stores). Breakfast at Primrose at Park MGM is also genuinely worth checking out. 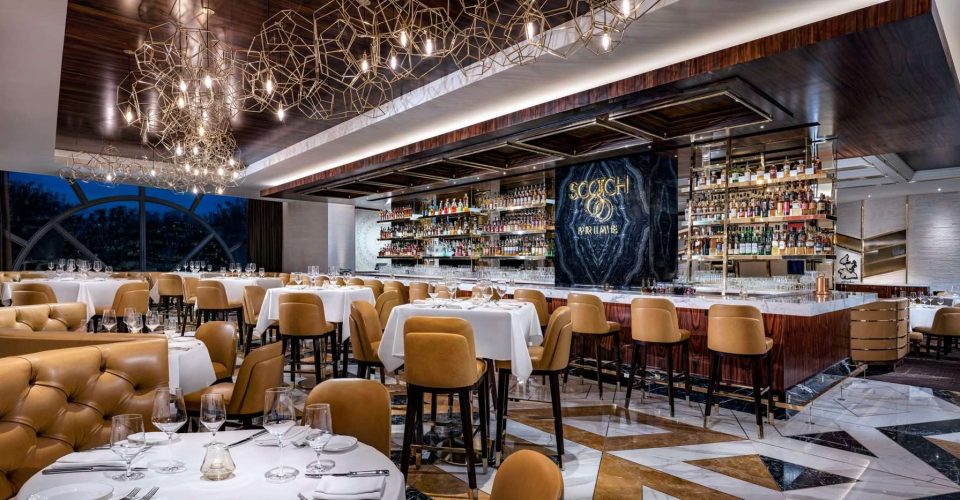 I feel that you could bring your most gluten intolerant, tea-total hipster vegan friend along to Las Vegas and easily find somewhere for dinner. And that sort of goes for the rest of the Vegas experience, they’d fall in love with it too. Because it turns out that Las Vegas isn’t just about over-the-top hotels, it’s not about Trump Tower or ostentatious displays of wealth and astronomic gambling losses, it’s opened the door to being something else, something more exciting.

As I packed my bags to leave, Michelle Obama was making her way to the same stadium that Trump had visited. I suspect that her vision of America was not very ‘Vegas’ in the over-the-top sense we’re used to, but in many ways perhaps nor is Vegas any more. It was telling that the election, days later, saw Nevada swing decidedly away from a Trumpian outlook. But from my time in Las Vegas, I’d say that it already has. I just wish all the hungover Brits on the plane back had realised too. Still, it meant there was plenty of booze to go round this time, perfect to toast a new Vegas with.