There are many things you enjoy as a child that do not quite keep the same magic once you’re an adult. Watching the same three Disney movies on loop for months on end is one (RIP Mufasa); running around and splashing about in puddles of mud is another. It is all well and good to try and keep in touch with your inner kid, but once responsibilities and a vague fear of getting physically hurt kick in, the fun often gets left behind.

This is what I was thinking about as I was making my way to Méribel, in the South East of France. The few weeks I spent skiing when I was 10 and 11 were exhilarating, but I had not stepped a foot on a mountain since then, and pointing out that I am not the same person over 15 years later feels like an understatement. It turns out I had nothing to fear, not only did I love it, if it had been up to me I would have merrily stayed up there until spring (yes, yes, I know it all melts, whatever!). 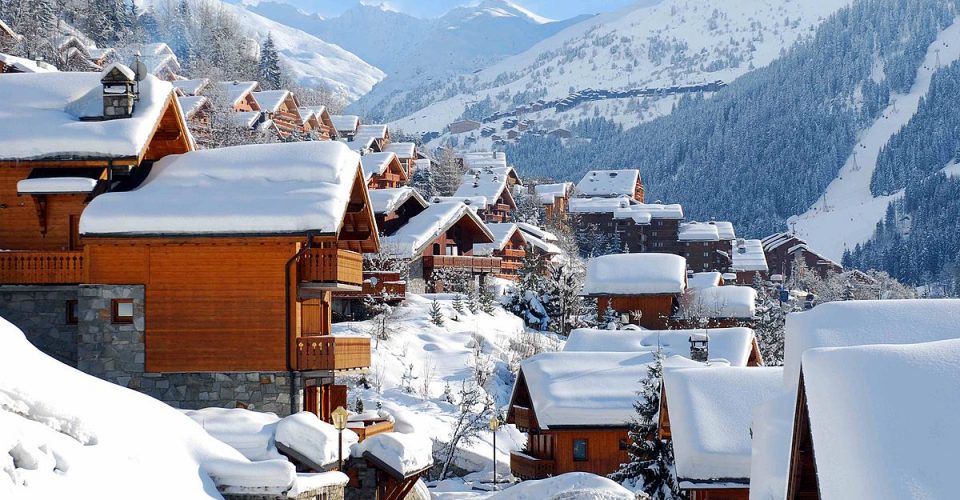 Spending a few hours with a brilliant (and very charming, chiselled etc) instructor from the Ecole du Ski Français (ESF) after picking up our rental gear on my first morning in Meribel revealed that skiing really is like riding a (very slippery) bike. He explained the colour codes, ski slopes are graded into blue, red and black (like karate belts, but with more pain involved) and within a couple hours I was launching myself onto a green slope expecting disaster, and instead my lesson and muscle memory sprung into action and I glided down without breaking a single bone. The next day  I was confident enough to explore all the blue runs in the area.

Well, I say “all” – Méribel is part of the Three Valleys, along with Courchevel and Val Thorens, which is the largest ski area in the world with a mind boggling 600km of slopes. So what I mean is probably more like “under a tenth of the blue runs”. This really was one of the highlights of the stay; as someone who can just about ski but would probably die on a steep red (or any black) run, I didn’t find that my relative lack of ability prevented me from going pretty much anywhere I wanted to go. Well, apart from one mistake which could have turned into a near-death experience; basically every ski lift I took gave me the option to ski on a green or blue run to go back down.

This doesn’t meant that I was uniquely lucky; of my travel companions, two were very competent skiers and were able to go visit neighbouring resorts and witness some incredible views on the peaks, while my friend who hadn’t skied before had a perfectly pleasant time sticking to the several green runs close to Méribel itself. There really was something for everyone, and we even managed to meet up for lunch on the slopes every day. Speaking of which…

Pointing out that eating and drinking in a skiing resort isn’t a cheap affair wouldn’t exactly make front page news, and Méribel hardly is an exception here. Still, if you’re thinking of going and are a mountain newbie, it seems worth saying that it is basically impossible to have a main for under 20 euro or a pint for under 8 euro (you thought London was bad?). The quick and cheerful places you can easily access by ski also don’t serve incredible food for that price tag either, but it doesn’t really matter as what you need is a filling bite before heading back out. 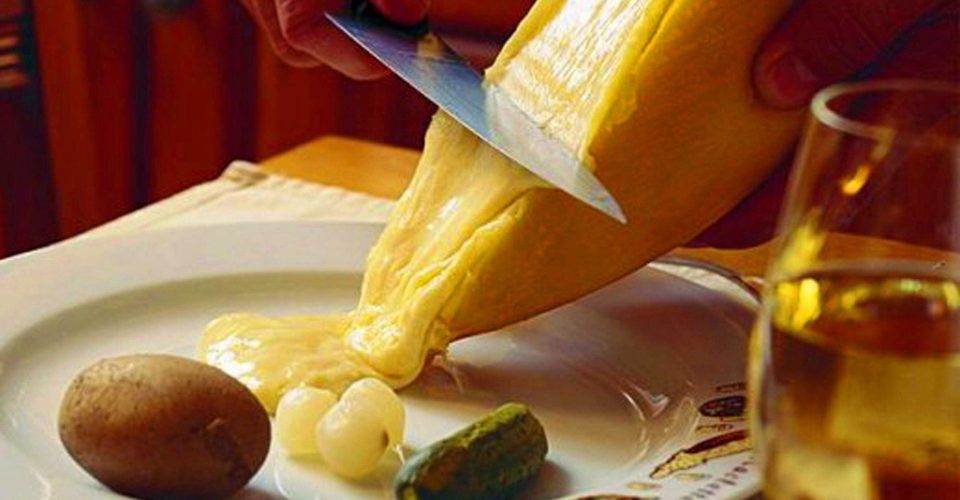 That being said, some places were better than others… The Rond Point’s steak frites, for example, was far better than Meribar’s savoyarde pizza. La Cote Brune’s steak tartare, on the other hand, was tasty but so huge that I could have been pushed into the snow and slowly rolled downhill until reaching my hotel.

This was also the case at La Kouisena, where we had dinner on the last day. A traditional raclette and fondue restaurant, it specialises in all sorts of thick melted cheese and cured meats with potatoes, and is unmissable if you enjoy eating so much you could doze off at your table. Unless you’re certain you’ve given up on skiing for the day, it is not the place to go lunch, and should be kept for that ravenous hunger you only get after a day of exercise in the cold, followed by one or three pints at the après ski.

On which note – it wouldn’t be a skiing trip without getting a drink in mid or late afternoon, depending on how sporty you’re feeling that day. I only got to experience the most famous spots – the Rond Point, again, and La Folie Douce – and both are accessible by ski, bobble and/or bus, so if some in your party prefer staying on foot, they can still join you afterwards. If you are skiing there and back, however, do try to moderate your drinking (unless you’re a far more confident skier than I am). 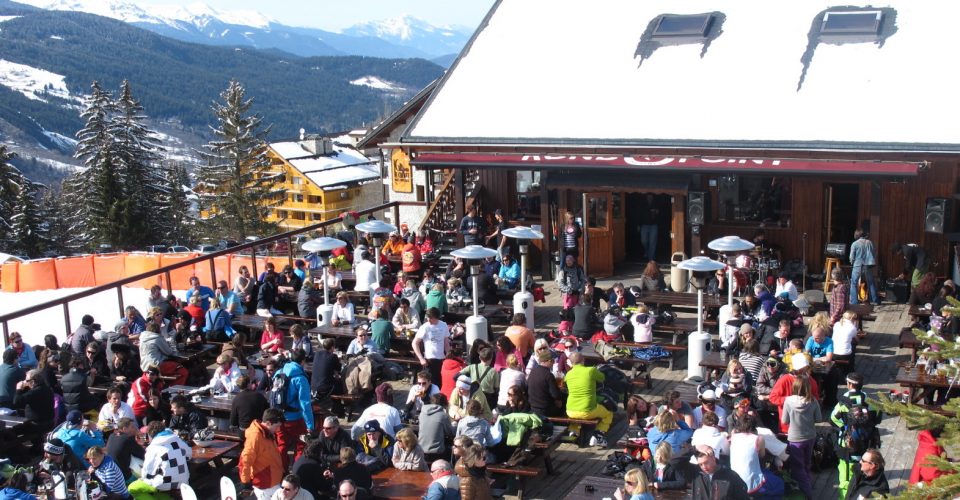 This doesn’t mean that you shouldn’t go out – once you’ve had your après, a quick shower and some dinner, head to Méribel town centre and you will almost certainly find yourself going through an unexpected bar crawl. There is the Meribar, which stays open until way past midnight; La Taverne, the bar called “Pub”, and many others. If you’d like to stay on the cheap side, you can always order the perfectly drinkable house wine – it is France, after all – and if you’re running out of ski chat, most of these bars feature some live music at some point in the evening. And since it is a resort frequented by skiers from around the world, every member of staff everywhere you go will be able to speak English.

You can also easily make friends, as long as you’re still in your early twenties or don’t mind being made to feel slightly too old; Méribel is crawling with young people working in the chalets and they definitely like to drink hard and play hard. Which brings us to…

We stayed in the Chalet Hotel Alba, which is a thirty minute walk up from the centre of Méribel, or a quick hop on the free bus which runs often enough to be useful. It is also opposite the Rond Point and a one-minute walk from the slopes, making it ideal. If views are your thing, then you’ll love this place, the vista on view from my bedroom was beyond picturesque, and having your own balcony definitely is a plus for us smokers. 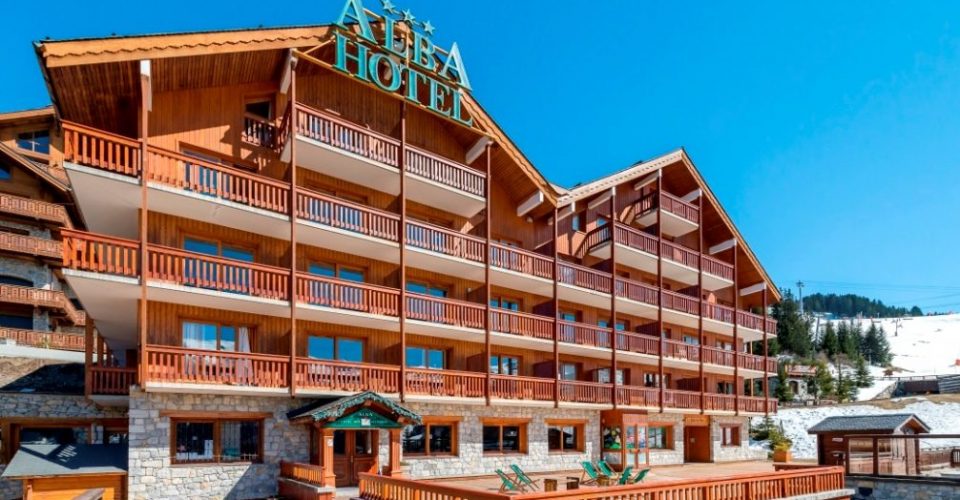 That being said, it probably is not the hotel for you if you’re after a truly luxurious experience. This certainly isn’t one of those intimidatingly fancy hotels. The buffet meals were pleasant enough but nothing to necessarily write home about, and there were a few issues with a room, including a handle that stayed in my hand when I tried to open a window and a corridor light which never, ever, turned on. All in all, it felt like a halfway house between a hostel and a hotel; cosy, friendly and unpretentious. I was on a trip with several people and only needed a place to sleep, eat and shower in so enjoyed it a lot, but anyone wanting to either spend more time indoors or being properly pampered would probably have been left wanting. 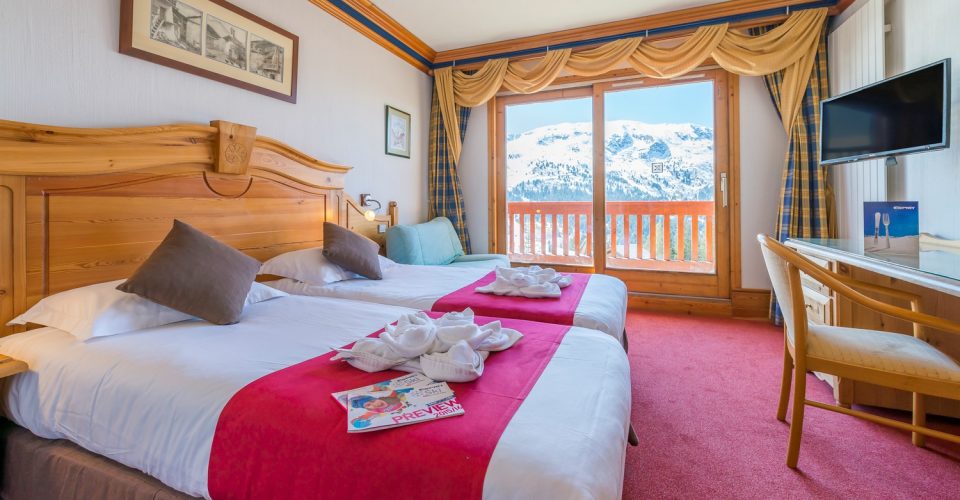 The five days were so idyllic that on my last morning, I briefly considered leaving London behind and starting a new life up in the mountains, which hopefully tells you all you need to know about Méribel. The slopes were brilliant, the people friendly, and the food always near enough – what more can you really need from a skiing holiday? Going in January also turned out to be an unexpectedly wise decision – with very few countries having school holidays then, none of the runs ever felt too crowded, and I never had to queue to go up for more than two or three minutes.

In fact, it hurt me a bit to write this, as a part of me wanted to keep it a secret. It would have been mean (and unprofessional) of me not to mention it, which means I only have one last thing to say – see you there next year, same place same time?

Ski Total (www.skitotal.com / 01483 791 935) is offering seven nights at Chalet Hotel Alba in Méribel, France from £674 per person. Price includes flights, resort transfers and chalet catered accommodation with wine. For more information on visiting Méribel, go to www.meribel.net and to book lessons or guides, go to www.esf-meribel.com.