If you’ve managed to keep up your running regime for longer than two weeks, unlike the rest of us, then read on. It’s time to up your running game, spread your wings, push that extra mile, and explore some of London’s best running spots. 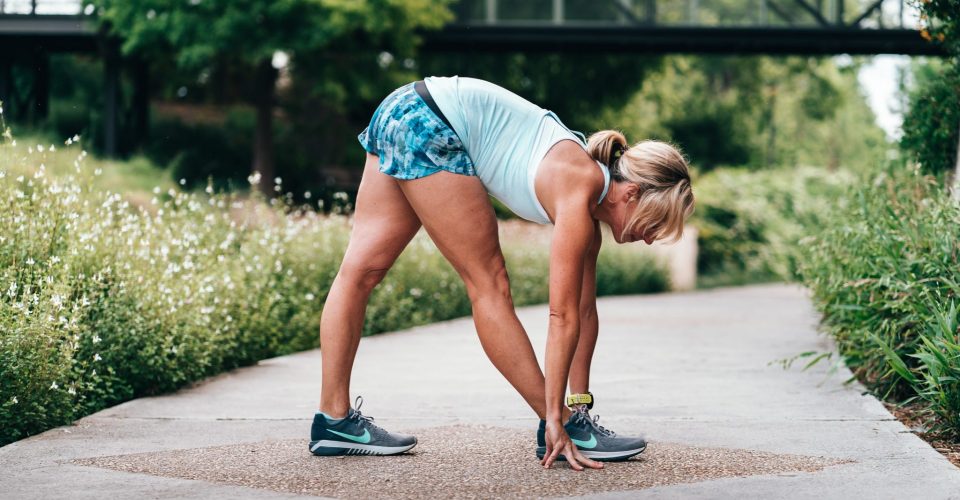 If you don’t want to be caught in the rush hour/ taxi slalom/ city cyclist mayhem, this is the guide for you. Here are a variety of cracking routes –  whether you want to run wild in a park or soak up the capital’s iconic sites on a gentle jog, there’s a run for everyone.

Lace up those (brand new and overpriced) running shoes, don your active wear, and get ready to get sweaty in ye old smoke. 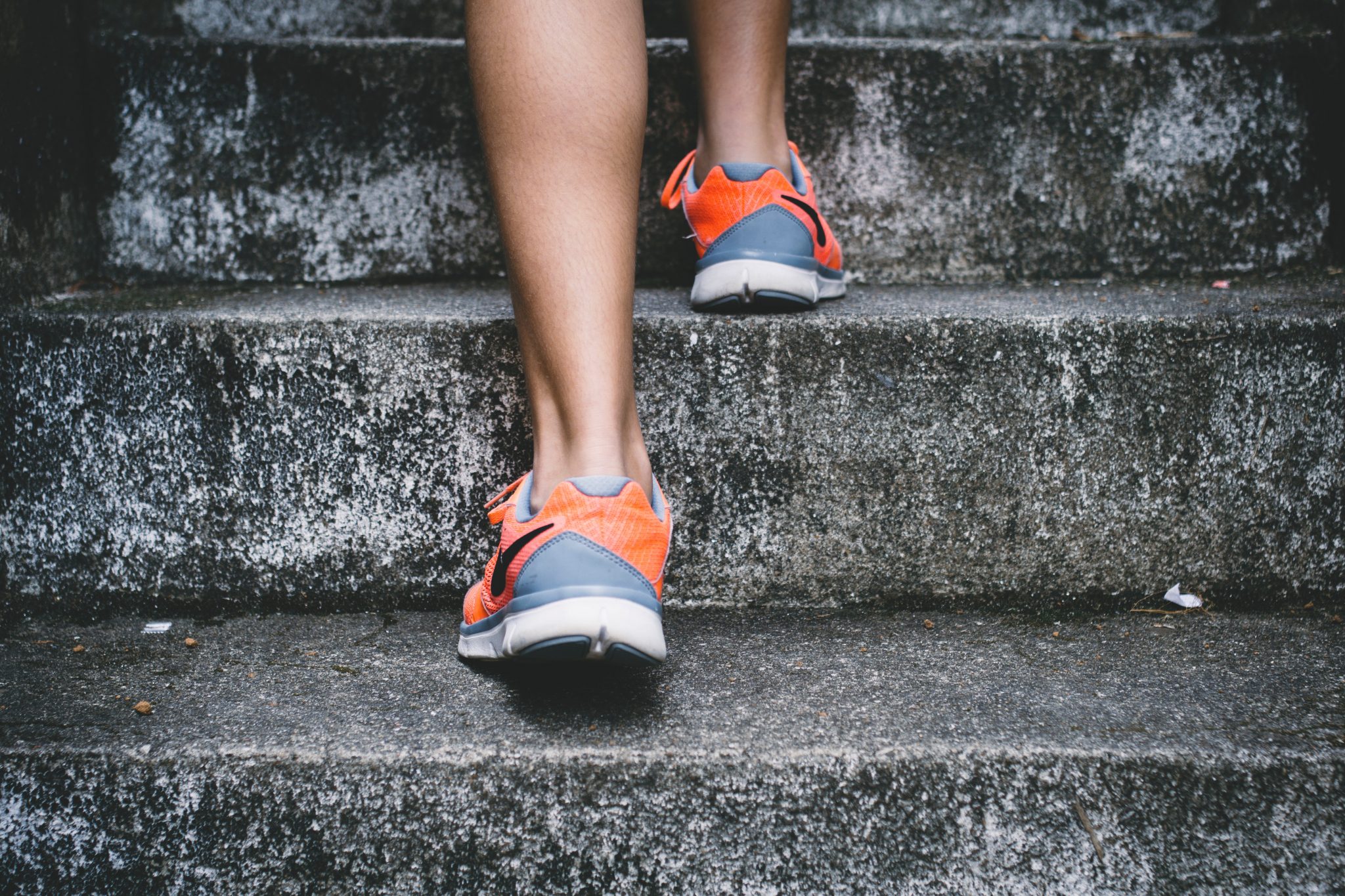 This royal route is a glorified figure of eight through Kensington Park, Hyde park, Green Park AND St James Park. Enjoy the grand sights of Buckingham Palace and Kensington Palace as you no doubt spring past at high velocity. This running spot really is the full Monty – green, central and scenic. It doesn’t get much better. 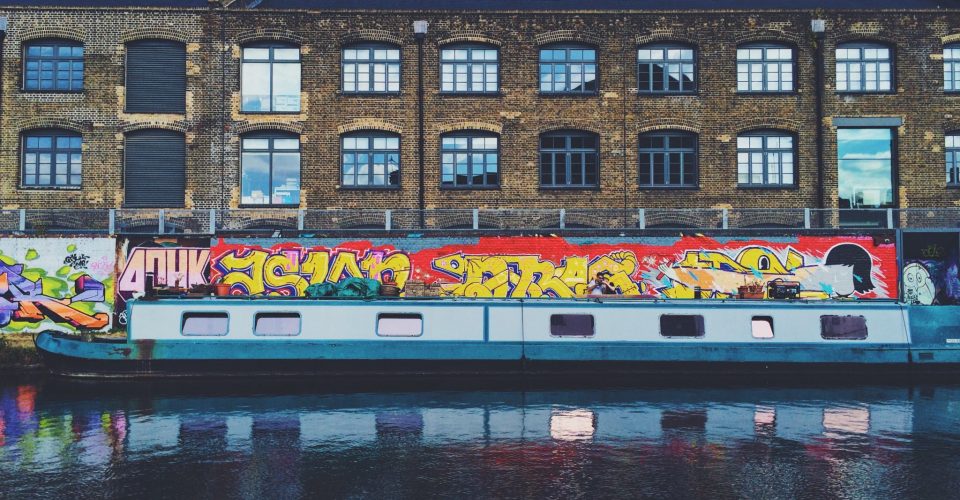 Discover the east end with a twist when you head out to explore the tow paths and backwaters of the old docks. Starting at Limehouse cut, you will run past the impressive Olympic stadium and beautiful Victoria Park. The tow path ends at Angel, where you can hop on the tube. Simple.

For inner city running tracks, Regent’s Park is top of the list. There are designated paths though the majestic parkland, meaning you can admire the rose-filled flowerbeds and boating lake whilst getting your jog on. Head up to Primrose Hill for some beaut views of the London skyline. 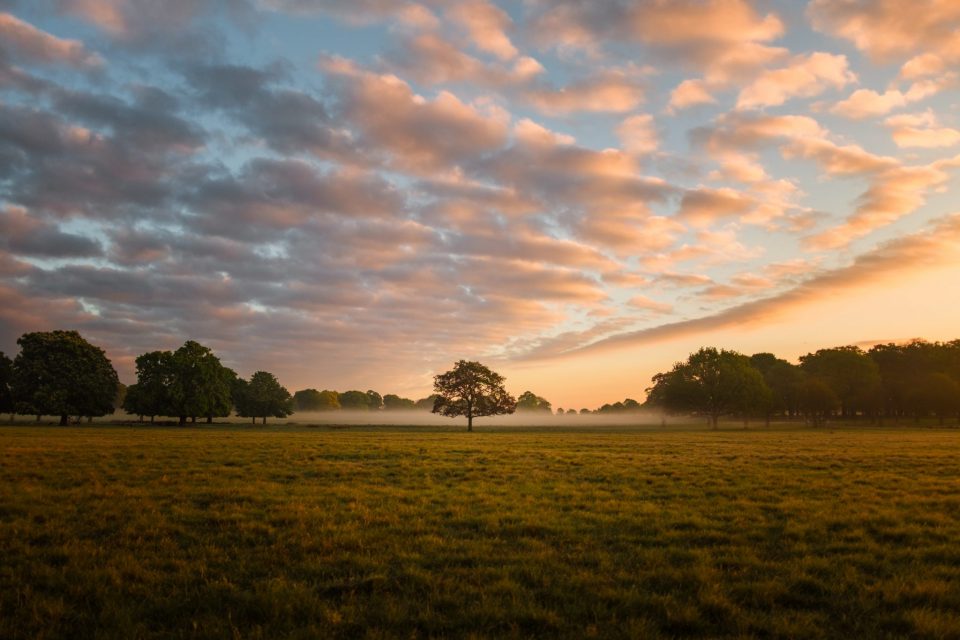 Richmond Park isn’t just famous for Fenton the dog. It is also home to some pretty fantastic trails through the woods and the fields. If you’re up for a long slog, following the Tamsin Trail, which is just over 7 miles with a couple of climbs. 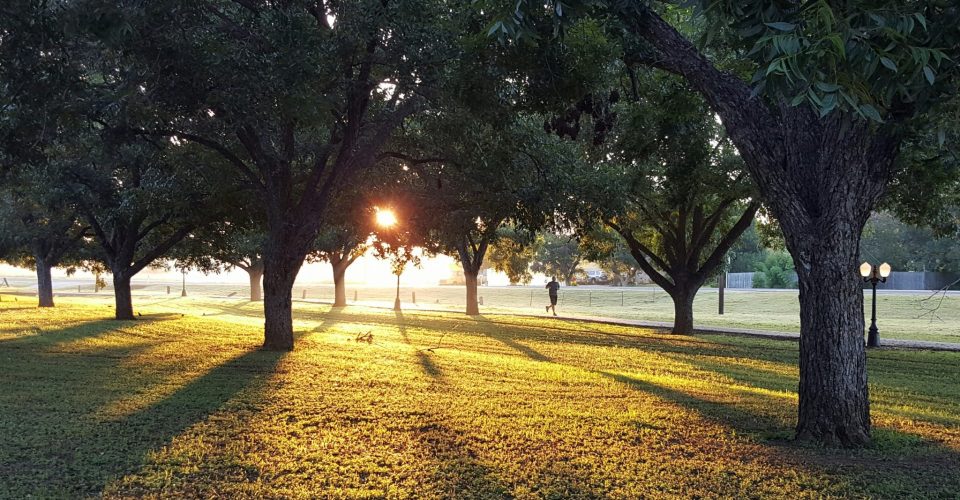 Who knew there is an old abandoned railway line from Finsbury Park to Ally Pally Park? Hidden in amongst the woods, this route takes you back to 1873 when the train line was running. Enjoy the stunning trees along the route, and you can always take a breather in Highgate Wood half way around.

Bored of setting the incline on the highest setting on the treadmill? Granted London isn’t the hilliest of cities, but there are hills out there and they’ve got to be better than a sweaty gym. Starting at Wimbledon Station, you’ll run past Wimbledon park, past the All England Lawn Tennis Club Centre Court (so maybe don’t do this run during the tournament), up to Southfields, before running back along Wimbledon Common and running (thankfully) downhill back to the station. Good news – it’s hilly but without being hideous. 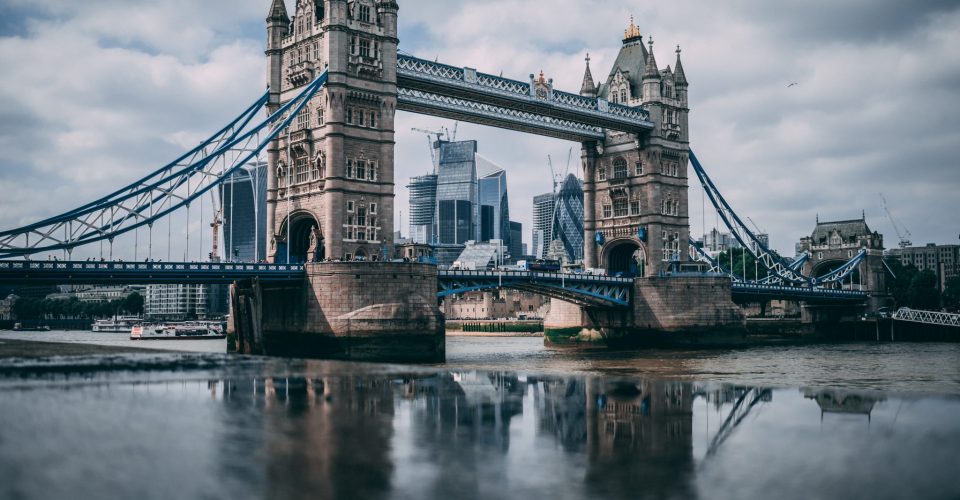 All The Sights : Thames circuit

Ah the classic run along Southbank, you’ll have to be prepared to dodge tourists along the way, but this flat run will take in sites such as the London Eye, HMS Belfast, Somerset House, The Shard, the Tower of London, Big Ben and the Houses of Parliament. You’ll also be running along the river which always makes things more interesting. 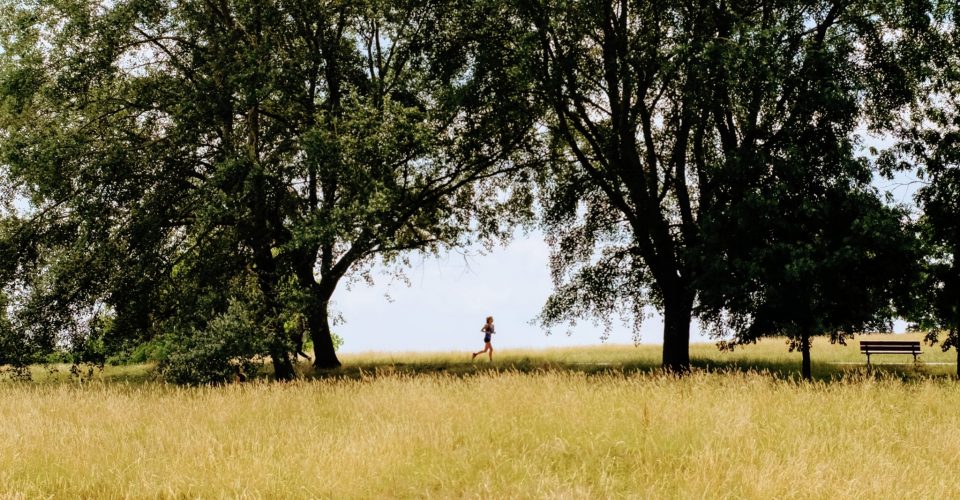 For a run entirely on paths and trails then it has to be Hampstead Heath.  Of course, there are lots of routes and you don’t even have to stick to the trail but this route will have you running all over the heath, taking in Parliament Hill the deer enclosure, past the stately Kenwood House and running past the bathing lakes. Taking a rucksack? Pack your swimming stuff for a dip after! 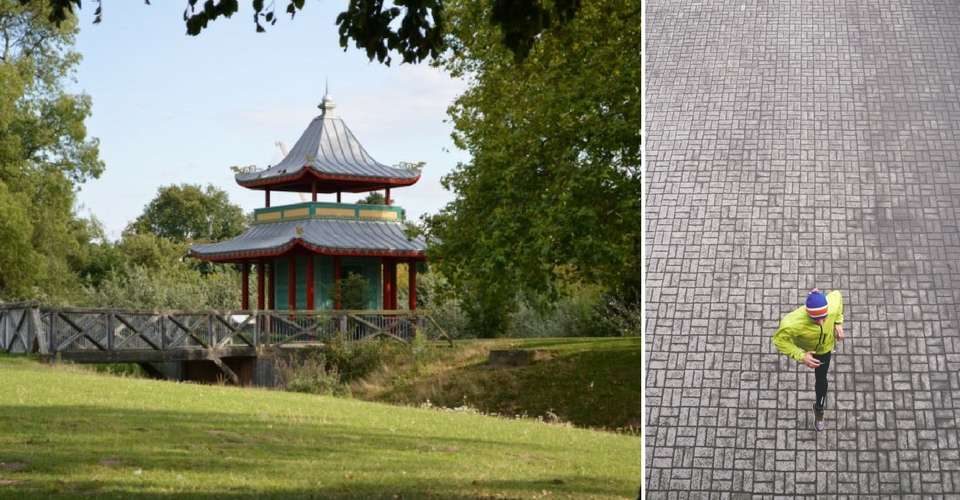 You really can cover quite a lot of London when you’re training for a half marathon, this run starts with a lap of Victoria Park before wiggling along the canal right up to Camden and on to Regent’s Park. A lap of that will then have you heading up Primrose Hill, quick pitstop for a view and then head up to Chalk Farm Underground – because chances are you won’t want to run home again. 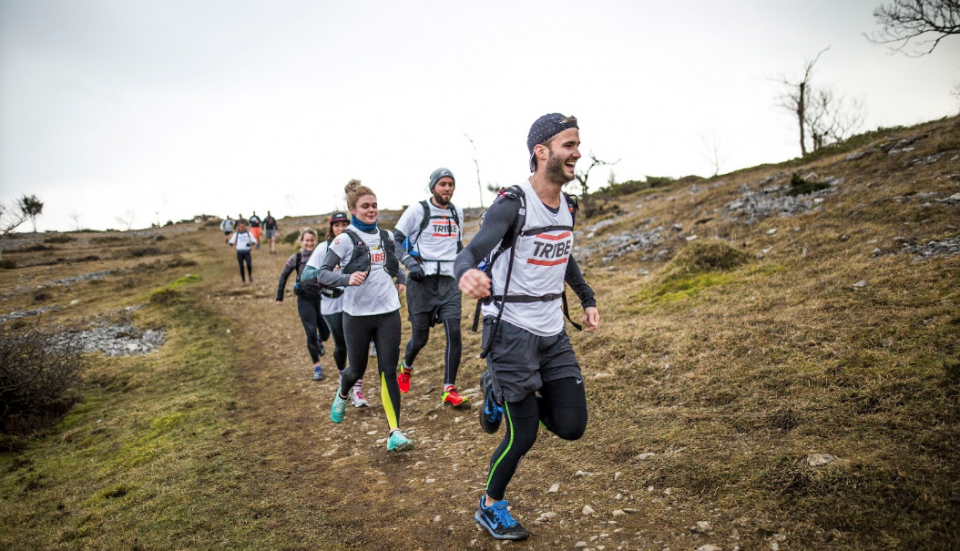 If you fancy joining a London running club, for that little bit of extra motivation and to meet some like-minded exercise fans, have a look at this list of London’s running clubs here .

Two super hot (both metaphorically and quite literally) running groups are Tribe – a community of 50 000 everyday athletes who organise a host of fantastic fitness events and London Midnight Runners, who pace the streets at all hours of the day (from midnight to morning), complete with music, fancy dress and afterparties. Who knew running and raving can happen together? 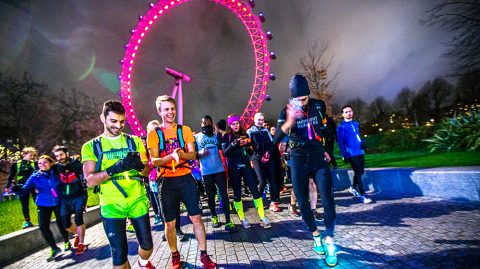 Also, as a footer, we’re totally raving about TRIBE and you can to. See the full list of events here!

If this super fit guide of London’s best running spots hasn’t got you racing out the door to run your way round the city, then I honestly don’t know what will.