Verona might be best known as the setting of Romeo & Juliet, but there is so much more to the city. From its Roman architecture to it’s 5 star hotels and romantic opera festival here are ten reasons to visit Verona.

When it comes to choosing somewhere to stay, it has to be the five-star Due Torri Hotel. Sitting in the historic centre making it perfect for sight seeing, the hotel marries luxury, modern touches and authentic period furniture. If you’re going to go all out, then go for the new and exclusive Presidential Suite Sant Anastasia and make sure you head to the Gourmet Grill Restaurant on the terrace where you can dine looking out across the rooftops of Verona.
Image: Due Torri Hotel

Back in the day if you wanted to show off your status, you didn’t just it off through frescoed interiors and the finest clothes, nope you showed it off to everyone by painting the outside of your house. During the 1400s and 1500s there were over 300 painted façades in Verona, which led it to gain the nickname of The Painted City. For one of the best examples of a frescoed building then head to Piazza Erbe where you’ll also find a market square.

‘Two households, both alike in dignity, In fair Verona, where we lay our scene.’ Yep Verona is home to Romeo and Juliet, except Juliet never really lived anywhere – she was after all fictional. Nevertheless, the city of Verona bought a house from the Cappello family (rather similar to Capulets), and declared it was Juliet’s house. In the 20th century a balcony was added on to make it more authentic. In the crowded courtyard you’ll find a statue of Juliet which is thought to bring you luck if you touch the right breast. You’ll also see a red post box where people still write letters to Juliet asking for advice in love and team will still reply. Although not sure how much a thirteen-year-old would know about love, given that she was with Romeo for all of four days. Me, cynical? Never.

The gladiators may have left the city, but the 1st century A.D Roman amphitheatre remains. Considered to be the world’s largest open-air opera theatre, it is now home to the city’s opera festival. Founded on August 10th 1913, a date that marks the centenary of Giuseppe Verdi’s birth, the opera festival runs from June to September and is a chance to see Aida, Carmen and Nabucco under the stars. Go for drinks alfresco beforehand and you have the perfect date right there. 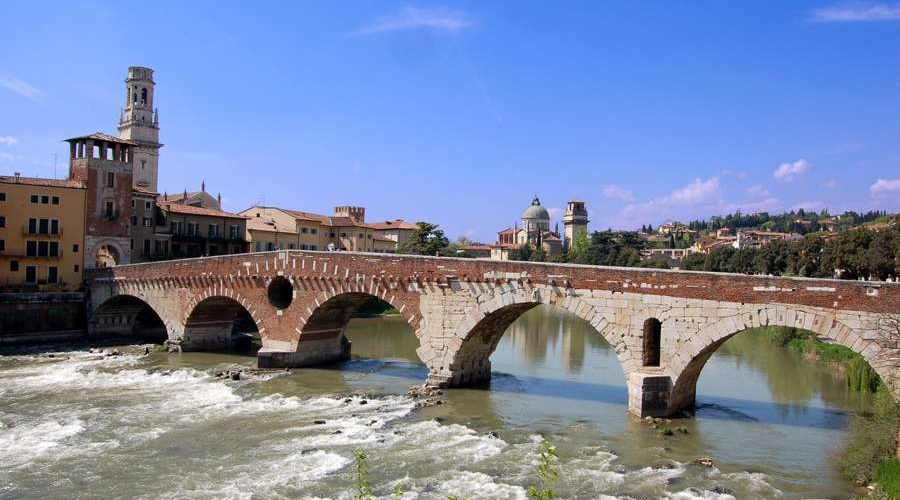 Ponte Pietra might seem like every other bridge, but it is a symbol of the city’s love of their architecture and heritage. Made up of five arches, two date back to the 1st century BC whilst the other three were rebuilt in the 13th century. The bridge did its thing, letting people cross over the city, until 1945 when German troops blew it up. That wasn’t going to deter the locals though, they slowly rebuilt the bridge, recovering the stones bit by bit from the river.
Image: Lo Scaligero

Leave the centre of Verona and head out of the city to discover pretty villages, historic villas and most importantly vineyard covered hills. If you only have time to visit one vineyard make it Villa Delle Torre. Owned by Allegrini one of the most famous wine producers in Italy, the house is a incredible example of Italian renaissance architecture depicting scenes of heaven and hell. Look out for the gigantic gargoyles whose mouths make up the fireplaces and step into the landscaped gardens, with the Romanesque fish pond and eery nymphaeum that once functioned as a steam room. Those looking to extend their visit can stay in one of the rooms at the vineyard too, before taking a tour, cooking class or hosting an event, and of course, trying plenty of wine.

After a day sightseeing and writing messages of love to Juliet, head to Caffè Dante Bistrot seating on the edge of Piazza Dei Signori. During the summer, the terrace is the perfect spot for a glass of rosè  (the restaurant is known for its wine cellar) and a plate of prosciutto and cheese.
Image: Caffè Dante Bistrot

It might not be the city’s cathedral, but the Basilica di San Zeno Maggiore is arguably more popular and well known. Built in honour of Verona’s patron saint San Zeno the eight bishop of Verona, the church is a fine example of Romanesque architecture. After being both razed to the ground by the Hungarians in the tenth century and being destroyed in an earthquake  in the twelfth century, the church with its Gothic style, finally took on its current form in 1398. The façade is dominated by the rose window, or ‘Wheel of Fortune’ and the entrance to the church tells the story of the saints and historical figures.

Sitting on Colle San Pietro (Saint Peter’s Hill) is Castel San Pietro. The name doesn’t refer to a castle, the impressive building that sits there now, was an army barracks, rather it refers to what was there, a medieval church dedicated to Saint Peter and a Roman temple and theatre. What you really want to do though is make the steep climb up, which is well worth it, for the views out across the city, you can also get a funicular if that’s more your thing.  Head there in there early in the morning when it’s still quiet and not filled with selfie sticks.

Often known as Piazza Dante, because of the statue dedicated to poet Dante Alighieri which sits in the centre of the square and was erected in 1865, Piazza dei Signori, is a good place to tick off some impressive buildings if you’re only in Verona for a short while and want to cram in as much architecture as possible. Around the square you’ll find palaces and notable buildings connected by arcades including the Loggia del Consiglio which were built as the city council chambers and Palazzo della Ragione, which is one of the free buildings you can actually visit.
Image: Lo Scaligero