The Christmas party season is here, it’s a continuous blur of mulled wine, Champagne, mince pies and chocolate. Break it up with a festive cocktail instead. From cocktails made with clotted cream, to decadent takes on mulled wine and glasses covered in snow, here are 25 Christmas cocktails to work through this December. See you on the other side for Dry January…

Meatup in Wandsworth Town (home of The Handbook HQ) have seven winter cocktails to choose from, keep it safe with the mulled wine or go all out with the Peanutini: Absolut vodka, peanut butter, Mozart, milk and Reeces Cup…they say it’s for the boss, we say it’s for the employee…We also have our eye on the Winter’s Guard – Beefeater gin, hot cinnamon syrup, raspberries and cranberry juice. www.meatupgrill.com

Three, it’s the magic number. It’s also the number of winter Sipsmith cocktails at the Met Bar. Choose from the Hot G&T, the Sloe Motion or the Hot Gin Punch – a mix of Aperol, Sipsmith London dry gin, sloe gin, ginger and sugar syrup and lemon and grapefruit. It’s over hot Pimms – if it indeed ever started. www.comohotels.com

Along with a cranberry and cinnamon sour, a pumpkin pie martini, The Hari also have the Floating Wish which sees a ribboned coupe glass filled with Amaretto Frangelico, espresso and flaming marshmallows. Fancy. Or go for the decadent White Christmas – a concoction of Mozart white chocolate liqueur, white chocolate ganache and Veuve Clicquot Yellow Label Champagne. As we said decadent! www.thehari.com 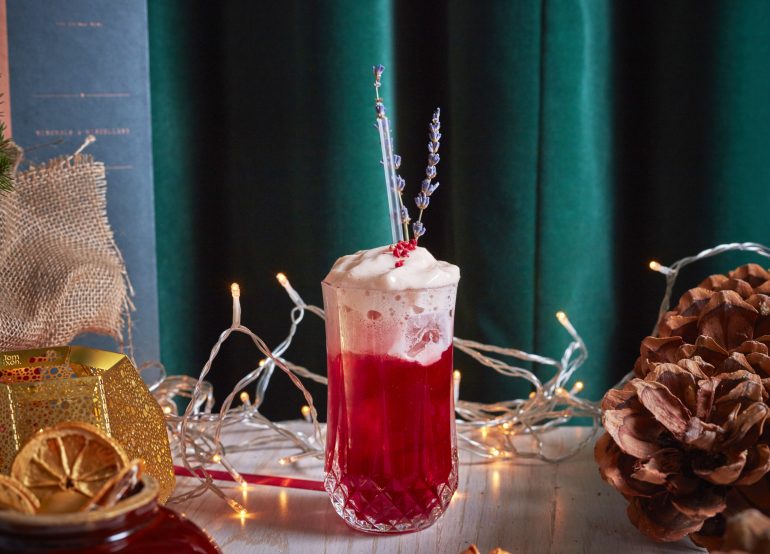 If the cold is getting to you then 1) put another jumper on and 2) kid yourself, you’re on a tropical island with one of Bronte’s new winter cocktails Birds of Paradise or Billy Bones. The latter is made from Cuban and Jamaican rum, fresh grapefruit, rhubarb, bourbon vanilla puree, yellow Chartreuse and ginger. Revel in those balmy temperatures. www.bronte.co.uk

The Library at Brown’s Hotel is coming over all festive this year by transforming into an alpine-style retreat, with snow decked boughs lining the windows and an open fire. It’s the just the right setting for sipping on a Snowflake Martini – a combination of Belvedere, Blue Curacao, Cacao white liqueur, milk and a dash of cinnamon syrup. www.roccofortehotels.com

You might remember when we told you about D1’s international cocktail exchange, it’s a chance for bars from London and South East Asia to swap their signature cocktails – rather like a cocktail pen pal. You can read more about it here. Well as part of that Mint Leaf Lounge City have created Abbey Nectar,  a particularly festive cocktails for the Shangri-La Hotel in Guangzhou. It’s made from D1 Potato vodka, Frangelico liqueur, Dom Benedectine, Aztec chocolate bitters and served with orange peel, hazelnuts and caramelised orange with chocolate. www.d1londonspirits.co.uk 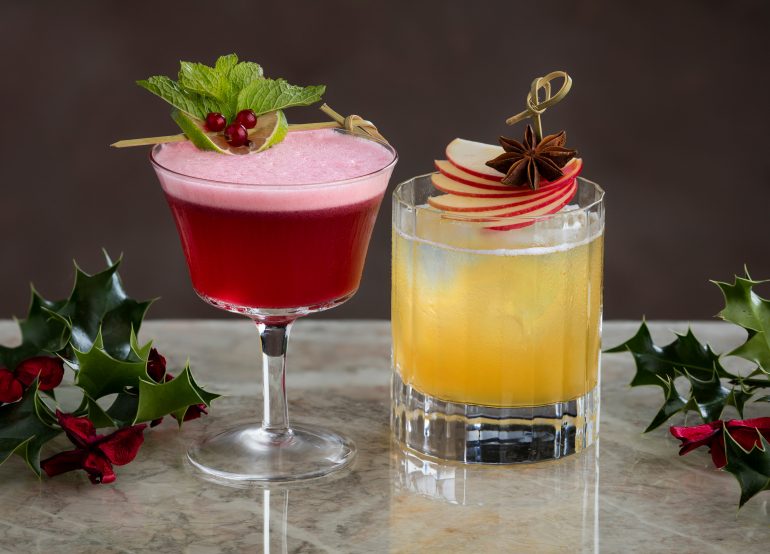 This year the Rib Room has its Scottish winter terrace and to accompany they have two winter cocktails to choose from the Cinnamon Sour and the Goodness Me – made from Glenfiddich 12 year old, pomegranate liquer, Sloe gin, sage syrup, lemon juice, angostura and raspberries. Have a couple of those and chances are you will be saying goodness me. www.theribroom.co.uk

Escape from the busy streets of London and spend the afternoon embracing the notion of Hygge by warming up by the fire at The Thomas Cubitt and drinking mulled wine or one of their Christmas cocktails – Kentucky Christmas, made from Woodford Reserve Bourbon, cinnamon, orange and egg white. www.thethomascubitt.co.uk 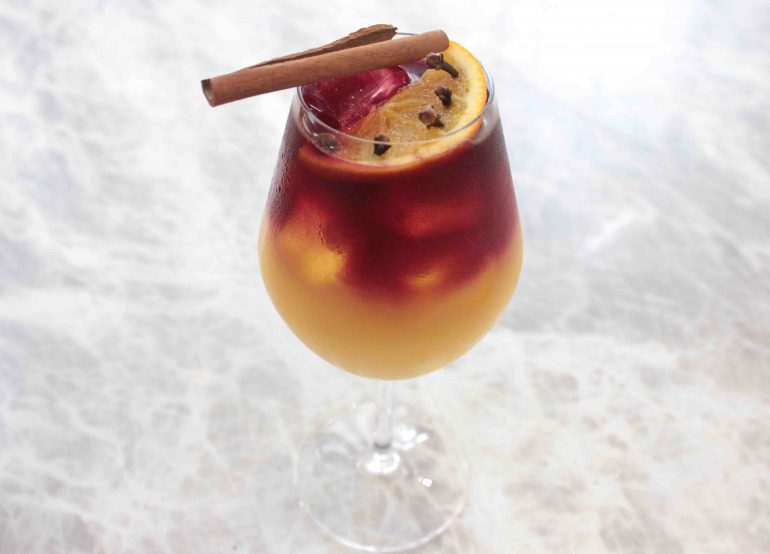 Fitzmas Fizz at Dickie Fitz -try saying that after one cocktail let alone two or three. With flavours of cinnamon, red wine and Christmas spices it’s a blend of ginger ale, ginger beer, red wine, Amaretto and Vermouth and garnished with cloves, cinnamon and orange. www.dickiefitz.co.uk

Alongside their winter menu which includes hearty dishes such as slow cooked pork belly with chorizo and black beans and wild mushroom gnocchi with tarragon, crème fraiche and truffle, No.32 Old Town has equally wintery cocktails. There’s the Sipsmith Winter Cup, the marmalade Champagne cocktail and a gingerbread Manhattan – you can also find them at its sister restaurants: No.197 Chiswick Fire Station, No.11 Pimlico Road and No.1 Duke Street. www.no32theoldtown.co.uk

How does this sound for a Sunday? A cracking roast at The Lighterman, before setting the world to rights, or just catching up with your friends- your choice, over mulled cider made with sloe gin, mulled wine and hot buttered rum. To us, it sounds just right. www.thelighterman.co.uk 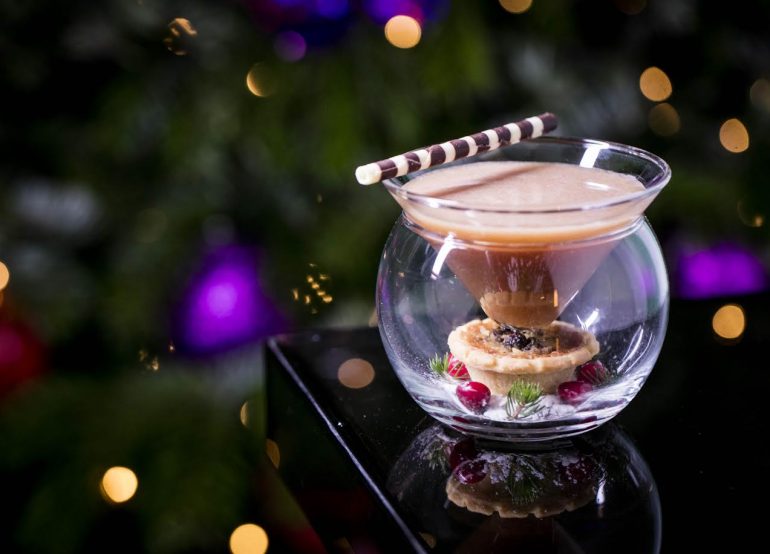 Away in the manger, no crib for a bed… This year, Bluebird have thought, ‘you know what goes well in a manger? A mince pie’. Probably because babies and cocktails don’t mix. Served with a homemade mince pie, the cocktail is a mix of toffee vodka, Mozart chocolate, Amaretto and muddled clementine. www.bluebird-restaurant.co.uk

Jack Daniel’s fans here is some news, they’ve only gone and release their first new grain bill in 150 years – Jack Daniel’s Single Barrel Rye. 150 years ago, Queen Victoria was on the throne and it would be a whole 23 years before the Savoy was opened which is where you’ll find it in festive cocktails. There is the 150 In The Making and Jack Black – a mix of Jack Daniel’s Single Barrel Rye, Mr Black coffee, Punt e Mes, liquorice syrup and Absinthe. You’ll find them served in the Beaufort Bar. www.fairmont.com

St James Bar at The Balcon

Fact fans – the interior of St James Bar at The Balcon is inspired by Coco Chanel’s 1920’s Parisian apartment. So, when they are creating their new cocktail menu, who do they look to for inspiration? That’s right Coco. The new winter cocktail menu is inspired by key moments in her life. We’ll be ordering the Mardi Noir – made from cinnamon infused Drambuie, yellow Chartreuse, Laphroaig 10 year old, lemon juice, Monin cinnamon syrup, pear nectar and cardamom bitters. Then we guess we just wait for our Coco transformation. www.thebalconlondon.com

Percy has gone on over to that pear tree, told the partridge where to go and claimed it for his own. Percy’s Pear Tree is much more delicious, made from Zubrowka Vodka, pear, ginger, egg white and cinnamon. A partridge cocktail wouldn’t work anyway… www.percyandfounders.co.uk 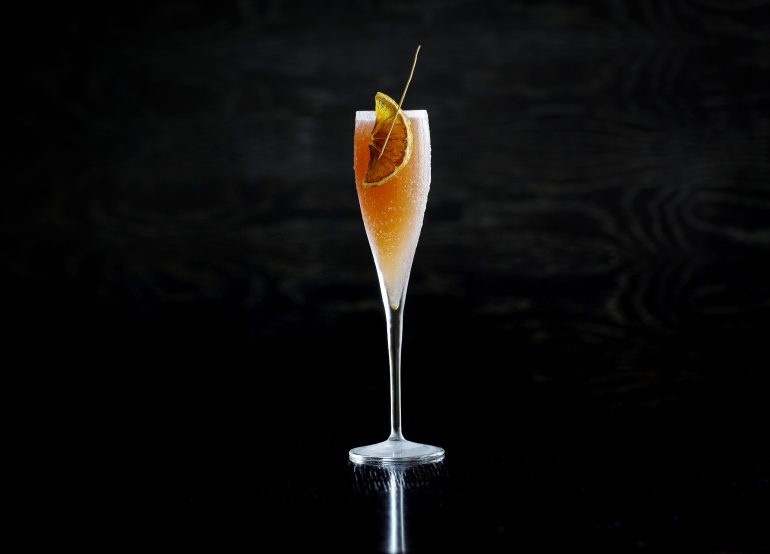 Christmas it’s the time for indulgence isn’t it. Have a mince pie, have ten. No one is going to judge you. So don’t just have a cocktail, have a cocktail which is also a pudding. Again drinking, custard – no one is going to bat an eyelid. Mews of Mayfair’s festive cocktail, The Queen Raffald, is made using Ambrosia custard, clotted cream, Diplomatico rum, gingerbread liqueur and finished with nutmeg and dark chocolate shavings. Cocktail pioneers. www.mewsofmayfair.com

Cocktails – it’s what Dirty Martini do. It’s their thing and they don’t take a day off just because it is Christmas. Their winter cocktail menu includes cocktails such as Mince Chai, Ambrosia Martini, Christmas Cheer, a quince and walnut Old Fashioned and the one we have our eye on the Sticky Toffee Fizz –  Captain Morgan spice rum, Patron XO Café tequila, Monin caramel syrup and Bitter Truth Pimento Dram liqueur which is then topped off with Prosecco. They’ve even made the glass look like it is covered in a blanket of snow through the power of powdered yoghurt and berries. www.dirtymartini.uk.com

One of the Italian Christmas cocktails at Theo Randall at the InterContinental is called the Christmas Dilemma, why – we aren’t sure, because when it’s made from Antica Formula Carpano, Liquore Strega, Havana Club 7 year old rum and Chinotto Antica Distilleria Quaglia we don’t quite know what the dilemma would be? Unless it’s whether to have another or to try the Holiday Postcards, a cocktail made from Grappa di Nosiola and homemade rosemary-coconut syrup. A dilemma we don’t mind having! www.theorandall.com 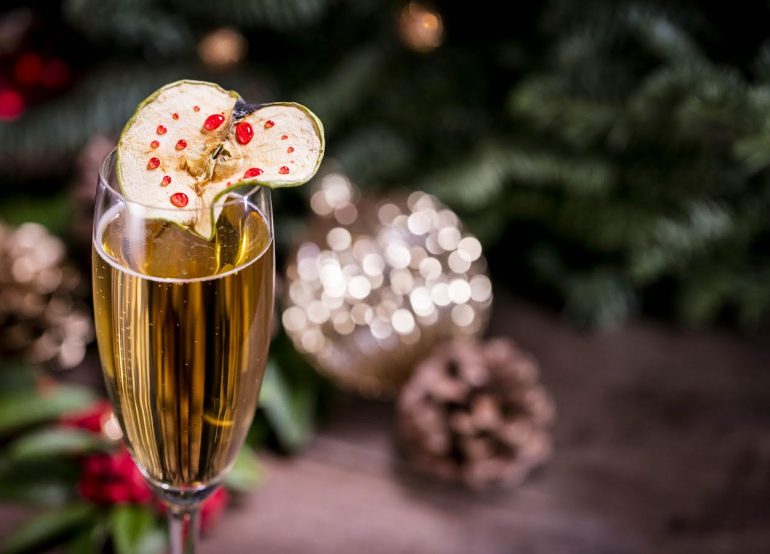 We heard that the miracle didn’t happen on 34th St. it happened on 100 Wardour St. And the miracle was a blend of bourbon, chocolate, nutmeg and apple. Tasty. With six festive cocktails on the menu, others include Nicholas Nightcap and The Grinch Who Stole Fizz. www.100wardourst.com

Jones Family Project are turning up the heat with their winter cocktails. You’ll find three hot winter warmers including The Hot Lips Houlihan made from Olmeca Blanco tequila, sugar, lime, and ginger shrub and the Hot Blazing Saddle which is a twist on a brandy blazer. Or if you want to get on the decadent chocolate train (one of our favourite trains to get on) then go for the What a Pear of Chocolates – Havana 7 Rum, Mozart dark chocolate liqueur, pear jam, egg white and lemon. www.jonesfamilyproject.co.uk

You’ve got yourself a Christmas date, wahey and whilst we can’t promise you’ll find mistletoe at Madison, we can promise you great views of our beloved London, apple pie martinis and spiced chocolate cocktails. You don’t need to rely on mistletoe anyway – you’ve got this. www.madisonlondon.net

Leave the garish tinsel and Slade on repeat behind and head to Quaglino’s for a Christmas cocktail with a little more finesse. The Art Deco bar will be serving up their limited edition Odin – made from Baron de Sigognac Whiskey and Chandon Champagne. www.quaglinos-restaurant.co.uk

Just as Rowan Atkinson says in Love Actually ‘this is so much more than a bag’, the Human Nature Christmas Cocktail is so much more than mulled wine, even if it is inspired by it. White wine, bergamot, spices, apple, herbs and pine are blended together to make a liqueur which is then added to rum and garnished with a gold chocolate leaf. www.aquashard.co.uk

Want more from Christmas in London? Check out our Christmas page…

Win Dinner And A Riverboat Cruise For Two With Bateaux London