It’s all Go Go Go this July, as we see urban beaches, giant TV screens, DIY ice lollies, steak masterclasses and a gin bar Gatsby would be proud of. With such a range of pop-ups and masterclasses there’s really nothing else to do except read on, sign up and try something new. Make sure you check out our Pop-Ups and Supper Clubs section as well for an extensive list of pop-ups and supper clubs taking place this month and beyond…

Bompas & Parr Do Flowers and Champagne

Bompas & Parr don’t tend to stick around, which is why their appearance at art, antiques and design fair Masterpiece London is for one day only. On Monday 4th July, a series of workshops inspired by the floral notes of Perrier-Jouët and their iconic Art Nouveau floral bottles. Guests can sip on top cuvees whilst creating thermocromatic colour-changing flowers on the specially created terrace.
Monday 4th July

Offal isn’t the most mainstream of ingredients but if anyone can change that it will be Michelin-starred Wild Honey with their Offal Dinner. The one-off dinner is designed by chef Anthony Demetre and the evening will be comperéd by food writer Rosie Birkett with a panel including William Sitwell taking part in a Q&A between each course. Ticket price includes wine pairing.
Tuesday 5th July

Ever wondered what really goes on behind the scenes in a London kitchen? Heliot Steak House are giving guests the chance to get hands on with their dinner and Shadow the Chef – one of London’s leading steak chefs, to be precise. The Meat Masterclass will teach the art of cooking the perfect steak from choosing the cut to butchery. After working up an appetite, you will get to enjoy a meaty three-course meal with specially selected wines.

Keeping Up With the Jones'

The woman behind the recent avo pop-up is on to her next adventure. Keeping Up With the Jones’ is inspired by the elegant, put-together (and fictional) Mrs Jones, who is opening up her house to nosey neighbours. Actors will play members of the Jones family, showing guests around the giant dishwasher room which you can climb in and a pillow fight room. In the kitchen you’ll find edible vodka toothpaste and macaroon dishwasher tablets to set you up for a night of dancing in the dirty laundry pop-up disco bar, complete with washing machine cocktail makers serving drinks created by Hawksmoor’s Ali Reynolds.
Thursday 7th – Sunday 10th July

Fun fact: dim sum was originally enjoyed as an appetiser but we now love it so much that, more often than not, it now takes centre stage. Learn the art of dim sum with a masterclass at Chinese Cricket Club, hosted by their sim sum chef, Mai Lan who has worked at Hakkasan. The class includes a welcome glass of prosecco, demonstration, mint and jasmine tea and a goodie bag as well as the food you prepare.
Monday 18th July 6-8pm

Following on from the success of parties held in Lisbon, Madrid and New York, be transported to the Mediterranean at the Gin Mare rooftop bar in Knightsbridge, brought to us by Med Rooftops. Expect refreshing Gin Mare cocktails and a Mediterranean menu designed by Mark Hix especially for the event as well as aromatherapy and music from DJ Jacob – resident DJ at Ibiza’s Pacha to both calm and excite…
Thursday 7th and Friday 8th July

If Gatsby Did Gin...

Quaglino’s is going all 1920s on us, with the launch of Giovanni’s Gin Joint. The speakeasy-esque bar will come alive with live jazz performances, dance and Tanqueray gin cocktails from 1st July all the way until 31st August. See the website for the full programme of Gatsby-style acts which change 3 or 4 times a week – think burlesque, murder mystery evenings and a six-piece big band.
Throughout July

Make Your Own Ice Lolly

Heddon Street Kitchen is celebrating summer with a vintage seaside inspired pop-up promenade complete with deckchairs and striped umbrellas. Create your own ice cream lolly by choosing from a base flavour including raspberry, lychee or the signature salt and vinegar ice cream before adding toasted marshmallow and doughnut crumbs and sauces including coconut rum.
Until 21st August

This isn’t just any cocktail masterclass, oh no, this is a masterclass at the Savoy with one of the senior bartenders from the Beaufort or American Bars and exclusively only for four people. During the class you’ll learn how to make four cocktails, the history of spirits and the influence the Savoy has in the cocktail world. And since cocktail making is hungry work, to finish there’ll be a three course meal at Kaspar’s Seafood Bar and Grill.
Saturday 9th July

Cocktails in the City

Cocktails in the City Summer Edition

Rather than heading from bar to bar, trying to work out how you’re going to get to each one now that Uber’s surcharge is 1.6 x head to the leafy Bedford Square Gardens instead as Cocktails in the City makes a return with their summer edition. Cocktail bars from across London and the world will be there hosting cocktail masterclasses, tasting tables and mixology demonstrations, meaning you can try cocktails from all over the city all in one place – sign us up.
Friday 29th – Saturday 30th July

Sure the French have Champagne, the Spanish, cava and the Italians have Prosecco, but since summer is the time to celebrate all things British we’ll be forgoing all of those to indulge in England’s most famous sparkling wine, Nyetimber. They’re hosting a pop-up at The Kensington hotel where you’ll be able to toast the summer sun (which we’re sure has to make an appearance at some point) with a glass of Nyetimber Rosé and a Wimbledon inspired dish made with Nyetimber jelly, Kentish strawberries and elderflower cream!
Friday 1st – Sunday 10th July

From North London to West Bengal

Islington favourite, The Drapers Arms will be bringing together Romy Gill, chef and owner of Romy’s Kitchen in Thornbury and Oliver Rowe, chef and author of Food for All Seasons for an exclusive supper club. The menu will see flavours from Romy’s Bengali heritage mixed with seasonal British produce, so you can expect to find the likes of goat and quail’s egg scotch egg with pickled red onion; curried pigeon breast, mustard seed yoghurt, beetroot and red onion salad and to finish mango and cardamom syllabub.
Wednesday 6th July

Under the Sea Supper Club

80’s inspired club, Maggies has teamed up with Très Chic to host an Under the Sea supper club! The club which normally is a homage to all things 80s will transformed into something a little more tropical with palm trees, kelp, coral, starfish and a live Caribbean steel band, of course you’ll need to dig out your most garish Hawaiian shirt to look the part too. The night starts with Belvedere cocktails, before you can feast on the likes of spinach and goat cheese crostini with truffle honey, Black Forest gateaux and sushi! Add in Pina Coladas and dancing and you can say hello to the weekend!
Friday 8th July

Breakfast is arguably the best meal of the day… definitely in our top three at least. London museums are also the best in the world, so what have Arla and Gizzi Erskine done? They’ve brought the two together to create the world’s first Museum of Breakfast. For two days only in July you can head to the Soho museum and see how breakfast has changed across the years, going as far back as the 15th century! What’s more is that you get to try all the breakfasts on show for free! Now that’s a reason to get up!
Saturday 16th – Sunday 17th July 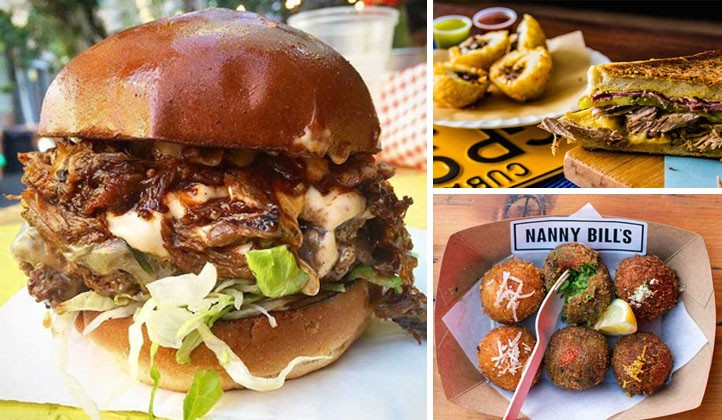