Swoosh, swoosh, not the sound of me as I carve my way down a freshly snowed-upon alp, but the sound of the wonky wheel on my Boris Bike as I glide toward one of London’s many apres ski bars. Yes, you’re quite demonstrably not in Courcheval, braying with the smart set, but you’re also not several £k down or being heli-lifted from a mountainside with a fractured femur and dislocated shoulder. On balance, let’s hit the raclette in Chelsea.

Proving you don’t need to go to the mountain-region of Milton Keynes to engage in fake skiing, Chel-Ski gives you the chance to do it here in London without even leaving Fulham. What’s more, and if this won’t sell it then nothing will, they’ve got the OFFICIAL largest print ever made of Mont Blanc, covering an entire wall.
Once you’ve brushed up on your snowplough, hit the après ski at Chel-Ski’s St. Moritz Alpine bar. Open seven days a week, it’s the perfect place to sip a glass of wine, a post-work Aperol Spritz or alpine themed bar snacks, which can be pre-booked so that guests can be ‘transported into the mountains and feel like they are in the Swiss Alps’. Which will be confusing given the giant Mont Blanc picture which is definitely in France. Or Italy. Not Switzerland. 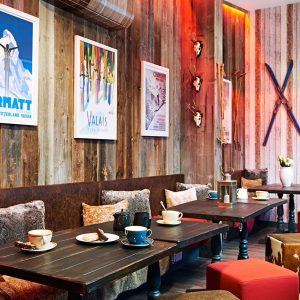 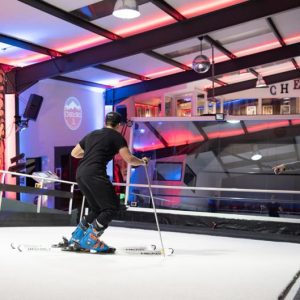 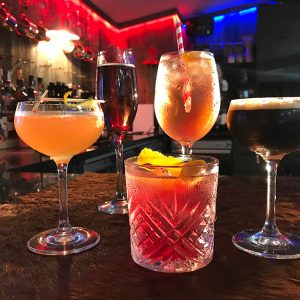 The Montague on the Gardens

The Montague on the Gardens are back with their Ski Lodge for another year and it’s looking better than ever. The Bloomsbury hotel has transformed into one of London’s hottest après ski escapes, complete with fir trees, snowmen and, if you head into the temporary lodge, plenty of Lanson Champagne.

With reindeer, ski racks (could be useful if it actually snows this year), strings of fairy lights, piste maps, the lot. And they’ll be complimenting the decidedly wintery decor with a selection of flavoured schnapps and vodkas, mulled wine and spiced cider.  Head into the lodge and warm yourself by the fire while enjoying a glass or several of Lanson. 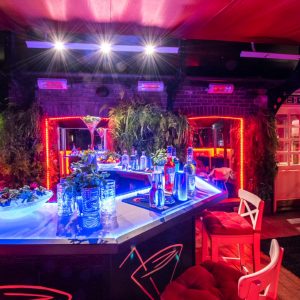 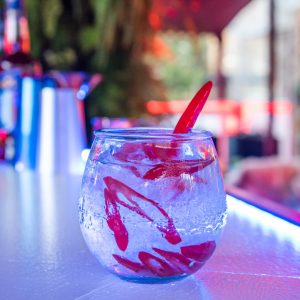 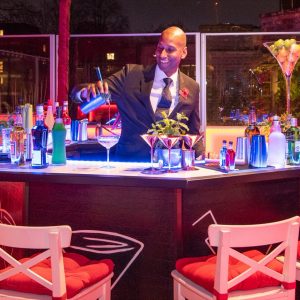 The White Haus in Farringdon is an all-year-round perpetual ski chalet (no off-season mountain bikers here thank you very much), and they take it all very seriously. So seriously that the Ski Club Of Great Britain support it and use it as a base for their events. Which is a pretty ringing endorsement.

The timber-clad chalet-style bar is strewn with all the usual sheepskin throws, cuckoo clocks an random bits of ski equipment. You can even book a vintage cable car to eat in, just to feel at home. The menu of Germanic staples like schnitzel, pickles and sauerkraut as well as a an extensive bier list is a must. 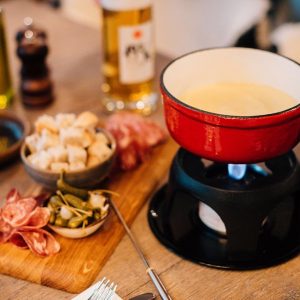 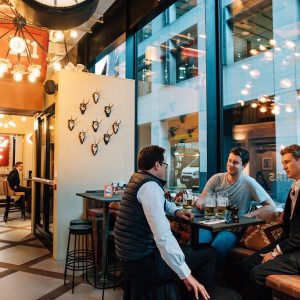 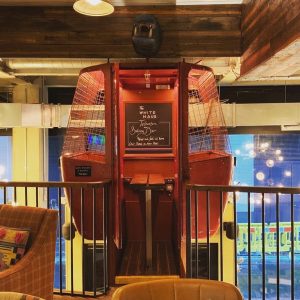 There’s a lot going on in Antigua and Barbuda, snorkelling, jet-skiing, sipping pina colada by the beach, but skiing – not so much. So what do you do if you’ve a Caribbean-themed bar in central London? Archer Street have the answer.

Totally flip themes and embrace the alps, that’s what. And so to Archer Street where they’ve about-turned into a full-on Alpine shrine. And of course they’ve called it ‘Piste’. Get it? Because it’s where you go to get- oh never mind. Come October 24th gone were the palms and coconuts, and in with the antlers, the sheepskins and winter cocktails, not to mention cheese and charcuterie plate and, because the Alps also spans Italy, pizza. 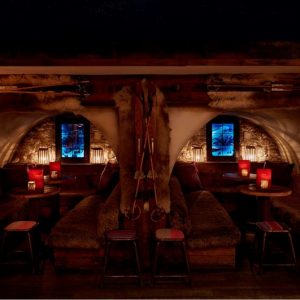 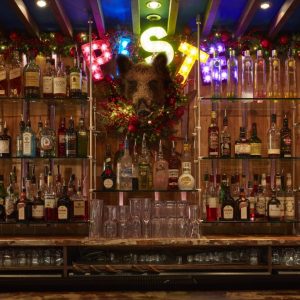 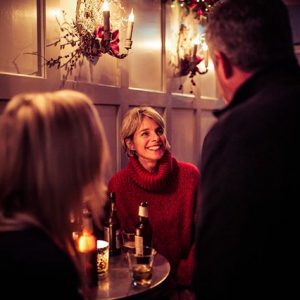 The whole alpine thing isn’t just about skiing, you know, there’s skating too. Think Torvil and Dean, or that Bond film where Roger Moore gets amorous with a 15 year old. And where there’s skating there’s apres ski.

Apparently claiming to be the only rooftop ice rink in Europe (we think this might need fact-checking), you can skate with the city rising behind you before hitting up the lodges (huts) and igloos and indulging in some suitably alpine (and, incongrulously, Greek) food. 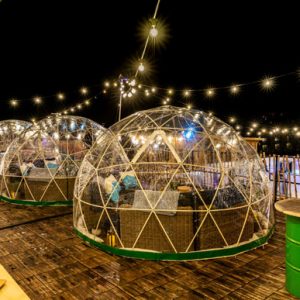 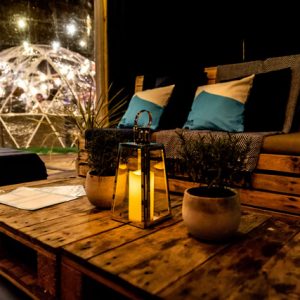 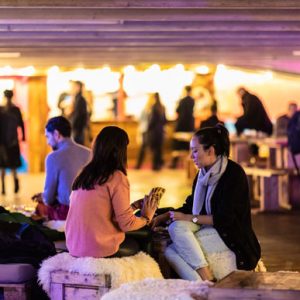 Billed as the most romantic thing you can do on the Thames, the Truffle Hut at Le Pont de la Tour is seriously special. Not least because it’s secluded with just you, your dining partner, some bits of bark and the waiter, but because the menu is noteworthy.

Snuggle under a rug and look out at Tower Bridge as you dine on a bottle of premium Champagne and five courses of truffle. Enjoy wild mushrooms egg cocotte and truffle sabayon followed by terrine de foie gras, apple and raisin chutney and, of course, truffle brioche. The roasted halibut comes with champagne sauce and covered in truffle shavings while the breast of poulet noir, baby leeks, chicken jus is finished with black truffle. Finally, enjoy a truffly version of crème caramel served with golden raisins. 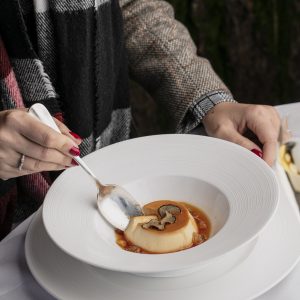 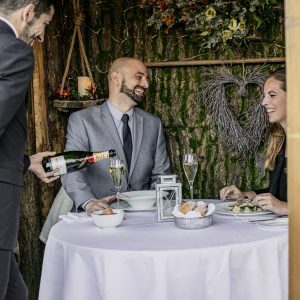 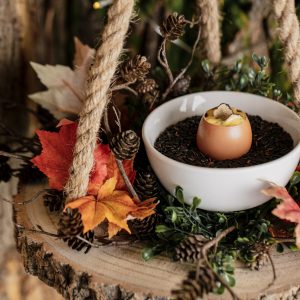 Does alpine fever know no boundaries? Presumably it does now because it’s just avalanched all over the Boundary Project along with raclette, cheese fondue and tartiflette.

And thanks to Boundary London partnering with Handbook favourite Veuve Clicquot, look forward to some fantastic cocktails. Try the Rose D’assemblage 1818, made by mixing the Champagne with Hennesy V.S. damson liqueur and walnut bitters and perfect to accompany food from the robata grill or a cheesy Raclette! 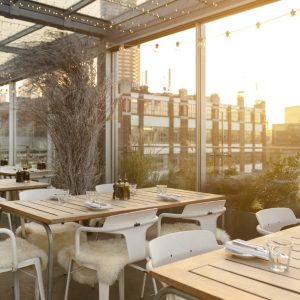 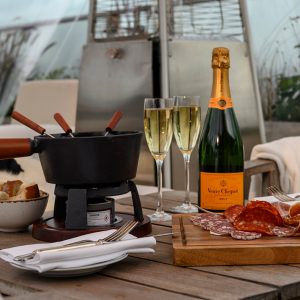 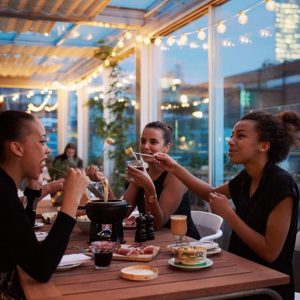 Inspired by the Austrian Alps, Savage Schloss transforms this rooftop bar into an alpine retreat.

Between the 2nd November to March 2020, Savage Schloss will bring all the wild fun of a ski lodge in the Austrian Alps to central London. During the daytime, guests can enjoy a traditional cozy après atmosphere complete with gingham curtains, boozy hot chocolate and Austrian-inspired comfort food. By night the bar will transform into a bench stomping playground with Steins of beer. 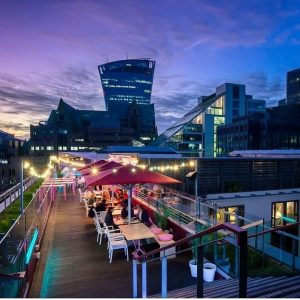 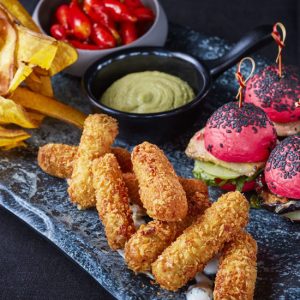 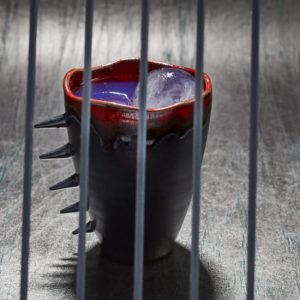 Forget yoga, at Mews of Mayfair it’s ‘and re-LAAX!’ But there’s no downward doggery here, it’s all abut Swiss ski resort LAAX as the Mayfair venue’ launches LAAX baby! Bringing the true apres ski experience, the bar aims to transport guests to the snow covered slopes of Switzerland for an evening of partying and cheese eating!

The cocktails are authentic and tasty, an alternative to the Ridge View sparkling wine, but we’re all interested in the nosh, which will include a range of traditional varieties, not least a Bündner Teller, not to mention a charcuterie board of air dried meats, wagyu bresaola, fennel & garlic salami, coppa and Swiss Comte cheese, served alongside gherkins, tomatoes and pickled onions, as well as ta traditional Swiss cheese fondue, made from a blend Le Gruyere AOP, Schlossberger and Reblochon Cheese, melted down with white wine and a splash of kirsch. 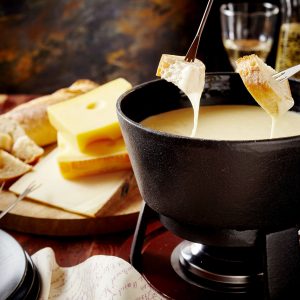 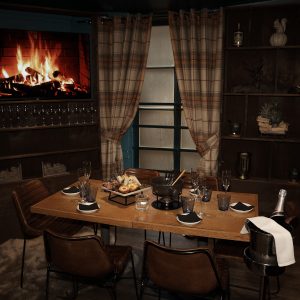 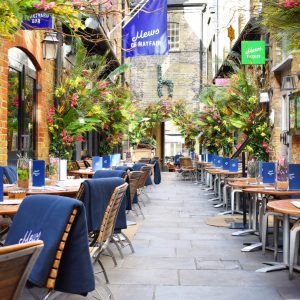 Given our ongoing obsession with all things igloo, it’s no surprise that coverage of Jimmy Garcia’s Thames-side pop-up is mainly around its fabulous igloo game. However, let’s not miss the alpine woodland for the trees, it’s an alpine pop-up. And that means all the usual accoutrements.

Like steaks cooked on hot stones, fondue pots plus cheese and charcuterie boards, all served either to your lodge or else in the nearby lodge itself throughout the winter months. 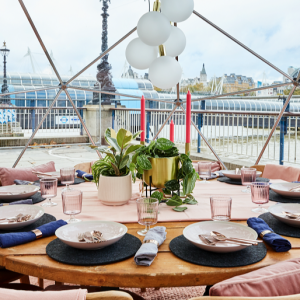 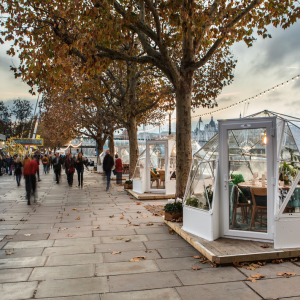 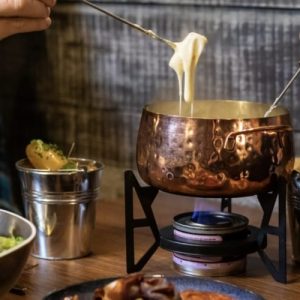 Where To Celebrate Chinese New Year In London 2020

ANOTHER A-List Club Set To Open On Berkeley Square

The £79 Membership All Londoners Should Get